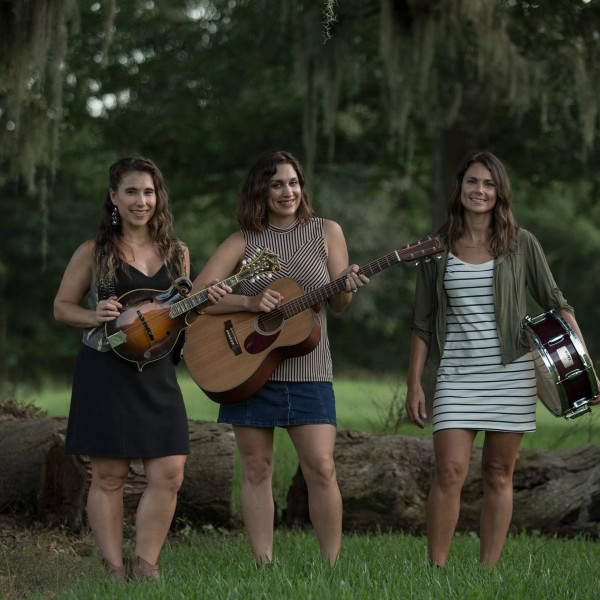 Made up of two sisters – Laura Huval and Maegan Berard – and a first cousin, Callie Guidry, Sweet Cecilia has been playing and singing together since they were children. The genesis of their love for music devolved from their singer-songwriter and Grammy-nominated father and uncle, Al “Pyook” Berard, who inspired them to follow the music in their hearts.

Borrowing their name – Sweet Cecilia – from their hometown, Cecilia, Louisiana, as well as the patron Saint of Musicians, St. Cecilia, the band was created in 2011, followed by the release of their debut self-titled CD in 2015. Two years later, they dropped Sing Me a Story.

Since their arrival on the scene, Sweet Cecilia, with their delicious blend of Louisiana roots, Americana, folk, country, Cajun, and rock savors, has dazzled audiences at Festival International de Louisiane, Festival Acadiens et Creole, the renowned Breaux Bridge Crawfish Festival, Festival International, the French Quarter Festival, the New Orleans Jazz and Heritage Festival, and a host of others.

From a purely subjective viewpoint, highlights include “Dans La Louisiane,” whereupon the trio struts their sumptuous harmonies, rich and creamy like mixing together whole milk and dark chocolate syrup. “Fais Do Do Waltz” travels on platinum-colored guitars backed by a humming fiddle. Gorgeously measured, the swaying rhythm rolls along indulgently, while exquisite vocals glide atop the alluring melody. Perhaps the best track on the album, this is a beautiful song.

The last track, “Sing Me A Song,” features superb a cappella tones initially, later fused with a sawing fiddle, gleaming guitar, and a fat bassline.