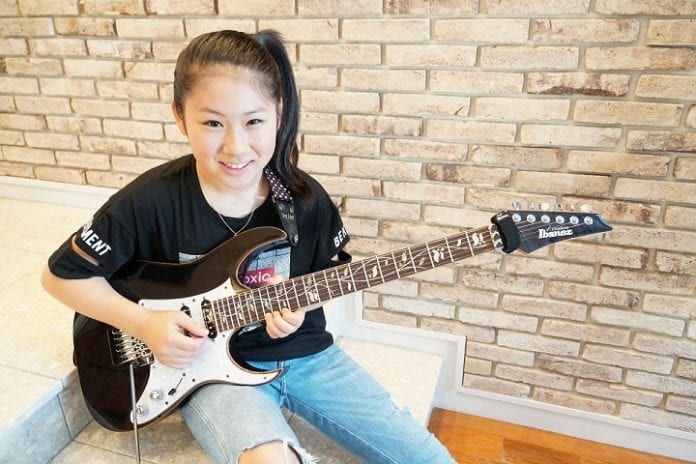 If you haven’t heard of Li-sa-X before, you will be soon; having gained a celebrity status of sorts, appearing on a number of TV programs and commercials in her native country of Japan, she made her international debut in over 100 countries, releasing her first EP Serendipity last year. Since then, Li-sa-X has pursued her own personality as a guitarist, finding a sound that’s unique to her. Well, she’s found it and shares it in WILL, her first full-length album released last month.

This child prodigy took time away from shredding to speak with GGM about her songwriting process, collaborative efforts, her equipment, and more.

Your debut album WILL was just released on Sony Music Japan and features nine original songs. Tell us about the inspiration and songwriting process.

At first, I had a hard time coming up with original songs. I’ve been too much oddly conscious about “what is it to be myself.” But now, I am determined to develop my “individuality” while thinking about all the artists I love who have inspired me. Some songs were born from the original form of the ideas – like songs with vocals, which I reshaped to fit to a guitar. Some songs started from guitar riffs that I came up with, along with different response-like phrases I developed and ideas I had been piecing together like a puzzle. Recently, I’ve been listening to a lot of music that doesn’t feature guitar at all. Sometimes I got hints from dance music and use that to create songs.

The single from the album “Little Wings” feat. YOYO has a video on YouTube with you two rocking it. How did that songwriting collaboration come about for “Little Wings”?

I met YOYO about two years ago through social network sites such as YouTube. A year ago, YOYO and her family visited Japan and we had a meal together. We said to each other, “It would be nice if we could play together someday.” And that came true on this album! When YOYO visited Japan again, we shot the video together. We had a lot of fun doing it.

What inspired you to play guitar and how old were you when you first started?

Ever since my early childhood, I’ve seen my dad playing the guitar happily at home. So, I grew up thinking, “This must be a fun toy to play with!” I started by playing with him using a toy guitar. I picked up a real guitar when I was five.

What guitars do you play and what do you look for in your guitar gear in terms of achieving your tone?

I play an Ibanez RG8540ZD. I’ve customized it a lot, such as changing the frets to stainless ones, using different pickups, etc. As for the amp, I use a DV Mark Multiamp. I try to use as little equipment as possible and keep it simple.

I like eating sweets, riding scream machines at amusement parks, and I love my dog.