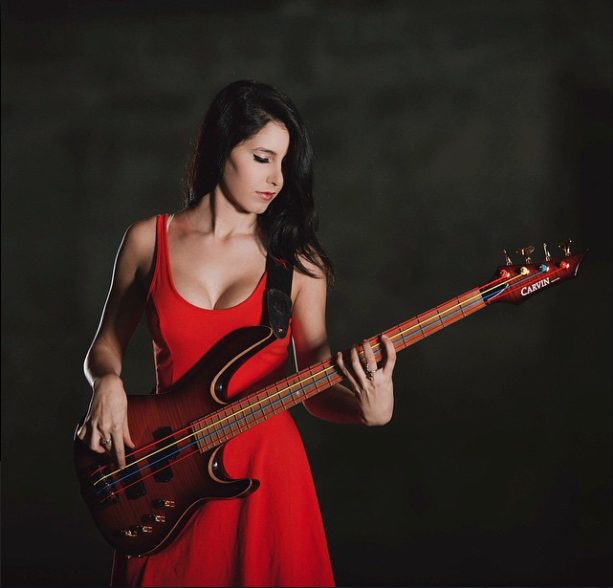 Multi-instrumentalist Anna Sentina began her love music at an early age beginning on the piano at age eight, then onto guitar at 12, and finally the bass at 13. Influenced by metal bands that were favorites of her Mother, she took to learning more about music and performing with a band by enrolling at the local School of Rock where she quickly excelled and became one of their All Stars having the opportunity to tour the West Coast with other School of Rock students performing songs played during Woodstock. She would later go on to attend the famed Musicians Institute in Hollywood, California where she studied bass guitar.

Anna considers herself a YouTuber where she has gained many fans with her covers of popular metal, rock, pop, and funk songs. Anna continues to wow fans on her YouTube channel, perform across the West Coast, has received endorsements from several major music manufacturers, and recently performed at the NAMM show in Anaheim, CA at the BOSS room and at the DR Strings booth.

Learn more about Anna and how she began her musical career and pay attention to her advice for aspiring artists!

You’ve been involved in music since you were eight years old – first with piano lessons, then on to guitar, and then ultimately the bass. Can you tell us about that progression and how you first got involved in music?

My mom first put my twin brother and I in piano lessons – she always wanted us to learn piano. After about four years, I wanted to learn more instruments along with the piano, and started taking guitar lessons at the same music school I took piano lessons at. After a couple months, my mom heard about School of Rock on the radio in San Diego, and was immediately interested in seeing what it was all about. We quit our old music school and started School of Rock right after meeting the manager and music director at the school. School of Rock is all about expanding your musical knowledge, and that is how I started playing bass.

Being heavily influenced in metal music from an early age by your mother, what bands inspired you the most and was there any one band or person that changed your world?

Several bands inspired me – Iron Maiden, Black Sabbath, Judas Priest, Van Halen, Slayer, AC/DC, Guns N Roses. I would have to say that Metallica changed my world, however. The lyrics just made so much sense to me, and the songs were so relatable – on top of being musically awesome.

You had the fortunate opportunity of attending the School of Rock in Southern California and was picked as one of their All Stars for several West Coast Tours. How was that experience and how did it prepare you for the beginning of your musical career?

Going on tour as a part of the All Stars changed my life. It made me realize that music was what I wanted to do forever, and what really made me happy. It prepared me for the roller coaster that is the “music business” at a very young age (14 and 15) and I really knew what I was getting myself into. Music isn’t an easy career, and I learned that on tour. But that didn’t change my mind about pursuing it – I had some of the best times of my life on those tours.

Also, tell us about the “Summer Shot” program you attended at the famed Musicians Institute in Hollywood.

I learned an incredible amount of things about not only performing live, but about the music industry and playing bass at Summer Shot. It also helped me make the decision to continue to Musician’s Institute when I moved to LA in 2014. I attended Summer Shot when I was 16, so I already had quite a lot of experience performing live, working in a band, etc. before then, but I still learned so much. I learned how to slap bass at MI. I also met my current bass mentor – Maurice Verloop. It was also an experience being and studying in the heart of Hollywood for the time being.

We were lucky enough to see you at the recent NAMM Show performing at the BOSS showroom. Can you tell us about your endorsements and your gear?

My endorsers are Roland, BOSS, Kiesel/Carvin Guitars, DR Strings, and Gruvgear. They have supported me IMMENSELY throughout my music career…. Words cannot even express how much. My endorsers are my family.

I have a lot of gear from all of my endorsers. I do not leave home to a gig/ event (in which I’m playing) or the studio without my Bass Equalizer, Distortion, BB-1X and tuner from BOSS, DR multicolor and pure blues strings, V49K and V59K Vanquish basses, and my fret wraps from Gruvgear. I use my Roland CUBE 10GX and Roland FA-08 Workstation to record.

NAMM is such a huge event full of music and gear and so much more. Can you share with our readers your experience at NAMM?

My experience at NAMM was unbelievable – meeting so many of my fans that I talk to online actually in person. I had no words. I love my fans so much, and being able to talk to them and get to know more about them was so awesome! I met so many amazing people and musicians and was able to be a part of an all-female guitar player picture that I’ll treasure forever! It was awesome being able to play live at the BOSS and DR booths and have a poster signing for fans. I had such an amazing time. I can’t wait for next year. 🙂

YouTube has been a great outlet for you to expose fans to your music. How important do you feel social media is in connecting with your fans?

Social media is incredibly important. It helps me get my name and my music out there, and with it, it is so easy to talk to and respond to fans and friends. I consider myself a YouTuber, a lot of my career is online. I’m really grateful for it.

Have you had to deal with any negativity and, if so, how do you handle that – you know, there’s always that one dude in the crowd that will say – “she’s pretty good for a girl.”

Yeah, being a girl in a male-dominated industry isn’t always easy. I love music and playing live enough to not let it get to me. It’s easy for people to say things behind a screen, behind a username. If you’re passionate enough about something, whether it be music, acting, art, etc… Do it! The more you grow, the more comments you get. Focus on all the good…. not on that one person trying to push their negativity with a gray face. Not worth it. 🙂

That brings up challenges that women in the music industry face. Did you get a chance to attend the She Rocks Awards while at NAMM?

Unfortunately no, but I plan to next year!

There are so many groups today for young girls to get involved with to empower them to pursue music. Do you feel like you’re a role model for young girls and what advice would you give them about pursuing their dream?

I have gotten tweets and comments about me being a role model to young girls out there. The gratitude and happiness I feel when I hear/see that I am a role model is beyond words! I really do try to speak to girls about pursuing music, no matter what. I talk about it in a documentary I recently did on YouTube.  Advice I would give is to pursue your dreams. If you want something, go get it. It doesn’t matter what people say. When you are passionate enough about something, and if it makes you happy, you have a right to pursue what makes you happy. Practice, and don’t let negative comments get to you. It’s always easy for people to spread hate. Focus on the people that spread love and support you.

Besides music, what other interests do you have?

I’ve lived by the coast my entire life, so I love the beach! I was also a competitive swimmer throughout middle and high school so swimming is close to my heart. I’m very passionate about animals, I have 4 dogs, 3 bunnies, and 1 fish. I love saving animals, nurturing them. I’m like a crazy cat lady except for pretty much every domestic animal… and wild animal…

The top 3 songs on my playlist are: (Currently) “Uptown Funk” by Mark Ronson and Bruno Mars, “Malibu” by Hole, and “Psycho” by Muse.
If I could perform with anyone it would be: Bruno Mars
My favorite song I’ve performed is:  “Take the Power Back”… People seem to like that one 😉
My first gig was: At the Jumping Turtle in San Marcos. The owner back then is now one of my very good friends. Went to his wedding last month, where David Ellefson was the minister. Pretty badass wedding…..
In one word, music to me is: Life.

For more on Anna Sentina, visit her sites below: