Ariel Westberg and Scott Bruzenak (aka Noisecastle III) make up the Los Angeles-based husband and wife duo Westberg. The Gen X duo recently released a new EP, Boomer Studies. The two met at what they describe as the “weirdest school in the U.S.,” Evergreen State College where they both were classical music majors. The many musical genres they have explored include Avant-Garde, jazz, rock, electro-folk, chamber pop, and trip-hop. They tell us, Boomer Studies was a chance to strip it down and reflect.

You recently released an EP, Boomer Studies. Tell us more!

Yeah, it’s been a journey for sure! We started the project a couple of years back, actually. We started with verb-soaked, twangy, and dusty guitar ballads like “Nostalgia” and “This Town Don’t F**k Around,” originally with a sort of dialogue in mind between us and Los Angeles. We also had this idea of this project being a songwriting experiment. Scott and I both come from avant-garde/experimental composition backgrounds and have done weird electro-folk and other genre-blending projects in the past. So this songwriting was experimental in the sense of, how do we go from our further-flung efforts to more classic American songwriting? It turned into a full-blown introspection of our mid-life crisis in a sense, and an examination of where our generation in terms of music and culture was coming from in relation to our parents’ generation, and what kind of music (perhaps music for the Baby Boomers) was playing in the backgrounds of our lives as we were growing up.

How were the songs inspired, and what was the songwriting and recording process?

We had the idea of creating memorable, simplistic melodies to accompany the more nuanced lyrics about life, being in our 40s in Los Angeles, and talking in more detail about mundane aspects of our experience.

Recording was a multistage process. Scott will build a demo. I’ll spend time driving around listening to the demo, strategizing how I’m gonna deliver it, and then record a vocal with our producer/writer friend Oscar. Scott then puts like a billion more guitars on it, and voila` Boomer Studies.

How would you describe your music?

Gen X trying to live the dream of Shania and Mutt. Heartland rock transplanted to the LA suburbs.

Our EP falls into two different directions genre-wise. We’ve always had a hard time living in one specific genre. This project was a chance to restrict ourselves to some forgotten mainstream styles from the ‘90s alongside some explorations into Americana and Country. It always comes out “eclectic,” but that’s what we were thinking about.

You could also define the sound in terms of the EP broadly having two different guitar feels—one is the spring verb with the Strat bridge pickup twang on songs like “Nostalgia,” and the other is the dry multi-pickup overdriven stacks of Strat tones on songs like “Old Kid” and “Living Proof.”

How was the duo Westberg formed?

We met in college at a liberal arts school called The Evergreen State College in Olympia, WA. We were friends and housemates for a period of time back then; I was studying experimental composition, opera, and classical voice (and later vocal jazz and classical composition) while Scott was a multi-instrumentalist and also majored in composition.

When did you start your musical career, and what was your first musical instrument?

I started composing and singing at a very young age. I’d write short pieces on our old piano, and my grandmother would score them in a little book for me. I took lessons for a bit as a kid and then later in college, and I eventually started playing guitar in college. I always loved to sing as well and began my musical career when I moved out to LA in the early/mid-2000s.

Who were the early musical influences that inspired you to pick up the guitar and play?

As far as early influences, definitely Paul Simon, specifically his album Graceland, was huge for me. I also grew up adoring Joni Mitchell, Crosby, Stills & Nash, and Cat Stevens. And thanks to my grandfather’s extensive record collection, I was an avid listener of classical music from the time I was a small child. I played piano and always admired the guitar, but I also found it somewhat intimidating. It wasn’t until college that I decided to learn to play. As a child, I had always been a storyteller, a poet, and a performer, but it wasn’t until I learned to strum that I felt my words had found a home.

I remember it was the terrible winter of El Nino in Olympia, WA, when I first picked up a guitar. It rained nearly every day of that year. My housemates and I lived in an old, dilapidated farmhouse on the peninsula of Boston Harbor, and the dismal fog like an army would barricade the light of day. The rain would pummel my flimsy window throughout the night. Often the heat would be shut off in the house as we occasionally neglected to pay the utility bills on time. It was cold, but whiskey kept me warm, and my romantic notions kept my writing fervent and revelatory, like a lucid dream. My mom had lent me an old nylon string guitar she got when she was in college. It was a right-handed guitar, and I, being left-handed, struggled to play it effectively. I always found my dexterity handicapped playing right-handed, but I kept at it.

I played through a full-fledged seasonal affective disorder that I didn’t know I had until years later. I played through stymied love affairs and looming adulthood, both of which felt foreboding and baffling to me at the time. I lost myself in the songwriting. The mossy eaves and dewdrops, the languid gray tide, the evergreens standing shoulder to shoulder like a wall along the ridge of the field, I’d gaze from the rocking chair on the front porch and I’d dream and I’d write. The guitar, as if an anchor in an eddy of emotions, grounded me. Olympia, the farmhouse, and my guitar provided me with the material I needed in my early songwriting years. I later took a baroque, classical guitar class and some lessons from a beloved teacher I idolized, and from there, my first real songs were born.

Later into my 20s living in Los Angeles, I found myself working a job as a dog wrangler for a big celebrity. She had several enchanted cottages on an oak tree-dotted piece of land off the coast in Malibu. My job entailed rounding up the dogs, piling them up into my car, and driving to the beach to let them run. Poems were deep in my marrow during this time. A surfer, E______ would drift to and from her heavenly vista, telling me stories of her heroism, how magical she was with animals, and her artistic endeavors, all of which were true. She was tender-hearted and took in the most hopeless of cases, both people and animals. Taco, for example, was an enormous pit bull mix who was required to wear a Hannibal Lecter mask at all times as he was extremely unpredictable and dangerous. Somewhere along the way in his travels, he picked up distemper and was never treated for it. My employer found him standing beside a taco stand somewhere in New Mexico, hence the name. He sent numerous people to the ER and bit through my brother’s arm, clean to the bone. I loved that dog and believed in him, so much so that I slept face to face with no mask with him when he would spend the night. Once, I stayed at her house for a solid month, writing songs about the sea, about being a young woman, and how the ebb and flow of the waves intersected with the nuances of growing up, like an intricate bolero. I’d write about trying to “save” eccentric, mercurial men like E______ as if he needed saving and as if I could ever save anyone besides myself, and I’d write with a wide, dawning future in front of me. The howling coyotes and owls would accompany my phantasmagoria of heady plans. And I would play and play, esurient for life.

What gear are you currently playing?

An Aria steel string. Scott has a Yamaha Nylon and a Mexican Strat with some funky noiseless pickups that someone modded and then left at a guitar shop.

So what’s next—new music or any other current projects?

I’ve been doing some songwriting for pitch here and there, but as far as next or current projects, we just wrapped up a music video for “Nostalgia” and did a fun self-made quarantine video for “Simple” as well. Now that the EP is out, we plan in the next month or two to start releasing new singles periodically. Our new one, “I’m Too Sober,” will probably come out right before the election. 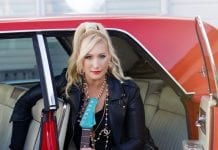 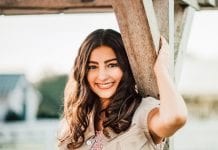 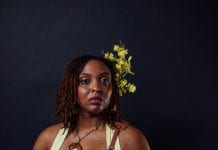