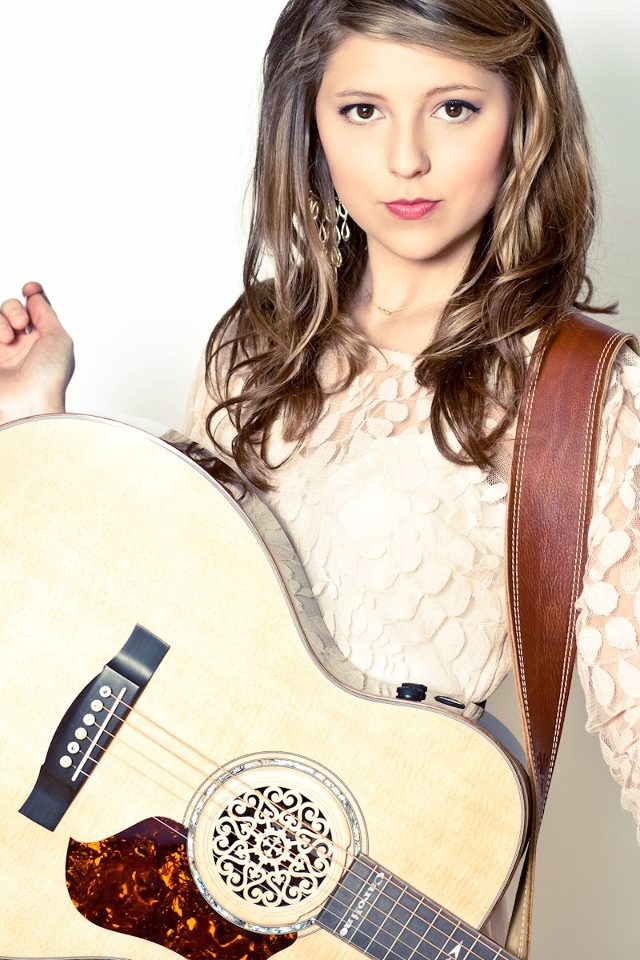 Caroline Kole is only in her mid-teens, but her experience as a live performer goes way back to when she was playing acoustic solo shows in the Tampa Bay area and was known originally as Suite Caroline.  And with 4 albums’ worth of original material to her credit, Caroline has already established herself as a creative songwriter to go with her singing and guitar-playing skills.

Despite her age, Caroline has earned praises all around for having what’s been described as “a level of talent and stage presence normally associated with much older acts.”

Among the many big names Caroline has shared the stage with over the last few years are country stars like Reba McEntire, Martina McBride, Alan Jackson, and “The Voice” panelist Blake Shelton, as well as such classic rockers as Pat Benatar, Sheryl Crow, and the Go-Go’s.

Given what she has accomplished so far, both on stage and creatively, it stands to reason that Caroline relocated last year from the Tampa Bay area to Nashville in the hopes of accomplishing that goal of making the Big Time.  I asked Caroline about the impact of that move, plus other topics like how she compares country music to classic rock, whether she’d add electric guitars to her acoustic ones, and that time she sang in front of 30,000 at the old ballgame.

First, Caroline, you have performed since the age of 8, but did you attend any major concerts prior to your first time on stage?

That’s all I did! Actually, that’s what made me fall in love with music in the first place. I always thought that the people on stage were so cool getting to perform to all those people!

You’ve opened for many great acts from both country and classic rock.  Would you consider some of today’s country music to have a classic rock kind of feel?

I would agree with that statement. They both got really grooving vibes that I absolutely love. They both rock pretty hard.

In Nashville, I’m surrounded by the best of the best songwriters/guitar players/singers, and it inspires me to get better and better. It makes me want to improve myself to go as far as I can go, it challenges me and I’m liking the results.

You’ve played Martin acoustic guitars since age 10.  I’m not sure that Martin makes the electric kind, but does that mean you’ll experiment with such a few years down the road?

Martin Guitars are amazing!! They have such a magical sound, I think. I’ve already been playing around with the concept of lead electric guitar as well though! Hopefully I’ll get that incorporated onto my stage performances soon!

Country music has been known to be as much about the songwriting as it about performing.  In addition to the songs you’ve written and performed, would your future plans include writing songs for others?

Totally! That’s such a cool opportunity that I’d love to be a part of.

You fulfilled a dream of yours by playing the Ryman Auditorium in Nashville, that famed Grand Ole Opry building, last November.  With that having been accomplished, would a show at, for instance, Madison Square Garden in New York City be an eventual goal for you?

You read my mind. Although I’m game for any stage! I just love to perform!

Some would consider playing before 30,000 people to be quite an accomplishment in its own right.  Where and when did that happen for you?

I was eleven and I sang the National Anthem at a Tampa Bay Rays vs [New York] Yankees game.  I was so scared I’d mess up, and you know you can’t mess up the National Anthem!! Especially in front of so many people who plan on singing along with you. It was an amazing occasion, and I know I’ll never forget that.

Finally, Caroline,  you have recorded 4 albums of original music.  Will you be working on a 5th anytime soon?

Always writing and always recording. Definitely getting closer to it!

And while no one can predict what the future holds for Caroline Kole, I wouldn’t be surprised if she leaves her mark on the music world.  She has the potential to do just that.