Home Interviews Catching up with Dani Wilde, who talks about her new album, Songs... 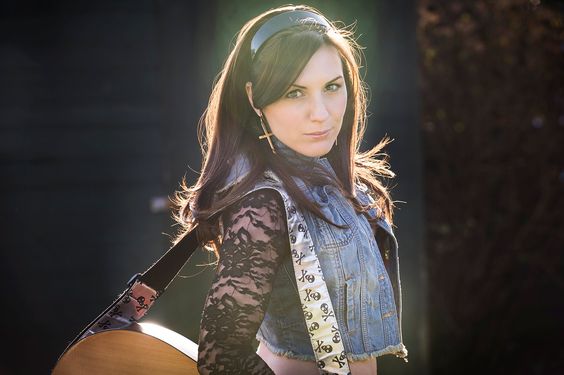 Musician Dani Wilde has recently released her third album (in April), Songs About You, and has gone down a more daring and unique route. She still sticks to her roots of blues, folk and rock, but digs into a more deeper sound, musically and lyrically. Dani is a woman of numerous talents, and those talents know no limits or bounds, as she is also a lecturer, choir member, and has a BA Honors degree in Music. Her passion extends to her charity work in Kenya for Moving Mountains, which runs a rescue center for street children. Dani organizes school projects for the children each year at the primary school. We enjoyed catching up with Dani, discussing her musical ambition with her third album, her aspirations, her charity projects, her heroes in music, and of course, our fun questions. Discover something new about Dani:

GGM: Why did you decide to focus on a different musical route on Songs About You, than on previous albums?

Dani: I listen to so much music. The music I enjoy hearing isn’t a specific genre; but across all genres. The music that appeals to me has strong song-writing and conviction and emotion in the instrumental and vocal delivery. I also love organic music. When I listen to Aretha or Johnny Cash or John Lee Hooker or Patsy Cline or Donny Hathaway; I love that the imperfections created by recording live vocal and live band takes in the studio are actually what creates emotional perfection… In those old school recordings they capture a vibe, a shared moment between musicians, something real! And that’s what I set out to achieve in this recording; something real to me that’s not limited by genre labels. This album was inspired by Country, Blues, Soul, Gospel, The Lauryl Canyon Scene, and all my influences rolled into one. The vocals are pretty much all one take per track as are the rhythm section. It’s old school and organic and you can really hear the beauty in the tone of the instruments from the upright bass to the cello.

GGM: With this being your third album, what life and culture influences were behind the production of this album?

Dani: My producer Stuart Dixon and I were really preaching from the same page of the hymn book when we made creative decisions in the studio for this record. It was great to work with someone who shared and inspired my vision and who knew how to make a musical idea a reality. Equally because Stuart and I were very close on a personal level he understood the emotion and lyrical perspective of the album as well as my influences and musical strengths.

I had been going through a bit of a rough ride and this album emotionally documents that from feeling as if I’d hit rock bottom to crawling my way back to a place where I could start over again. What really helped me at my lowest point was actually volunteering with kids for a great charity called Whoopsadaisy (for children with Cerebral Palsy) in Brighton. I would play music with these inspirational children and help them to develop as much as they could physically. The experience gave me a revived perspective on what is truly important in life and that you have to be grateful with what you’ve got and what you CAN do; and f**k anyone who hurts you or drags you down – you can’t waste time or tears on those people. This album is about Love, Living and Learning.

GGM: What musical aspirations, if any, do you want to pursue, other than singing and writing?

Dani: When I’m not touring the world, and I do tour an awful lot in Europe, I teach singing, musical performance and song-writing to teenagers at Britain and Irelands Modern Music Institute. I hope to help and inspire these kids not only to be able to have a career one day doing what they love but also to learn life skills such as critical thinking, problem solving, and confidence through music. You can achieve so much with determination, passion and hard work – especially if you are blessed with talent, too. I’m blessed to teach a great bunch of very talented students and I aspire to help them realise their potential. I’ve also been dabbling in Music Journalism and was fortunate enough to interview Jazz and Soul Legend Pee Wee Ellis recently for a magazine. That was an honour and I’m hoping I’ll get to interview more of my heros.

GGM: Let’s talk about your charity ‘Moving Mountains’; what exciting happenings are going on with it?

Dani: I’m involved in two charity projects in Kenya. One is with a fantastic charity called Moving Mountains. With their help and the help of kind and generous fans who have donated to the cause at my concerts, we have been able to greatly improve sanitation and educational opportunities for 2,000 children living in Embu’s slum community in Kenya. This includes work such as providing books, pens, pencils, art equipment, sports equipment, musical instruments and tutors as well as running water and fitting roofs, window and working toilets. We are still fundraising so that we can reach out to even more slum schools and street children. I also support an orphanage for children with HIV and Aids called Toto Love Orphanage. I’ve met the children many times and they are an inspiration… Hardworking, caring, ambitious kids who have seen so much suffering in their lives and yet still see so much beauty in the world. I’m currently fundraising to ensure they have enough fruit and vegetables all year round. Good nutrition can have such a positive impact on their health. More info can be found on my website www.daniwilde.com

GGM: What’s coming up next with you, your record label, and your music?

Dani: Well, I’ll be touring my new album Songs About You throughout 2015 and 2016. I’d like to make a live album/dvd at some point in the pipeline and also release some material on Vinyl. I’ve done a lot of live recordings for BBC Radio 2 at London’s famous Maida Vale studios over the years as well and it would be nice to release those recordings to the public – We shall see!

GGM: Which musician(s) has had the most profound impact on your career in music?

Hmm, there are so many musicians I could name in roots genres from John Lee Hooker to Bill Withers to Lyle Lovett. The musician who has had the biggest impact on me though actually has to be Michael Jackson. You probably can’t hear much of his influence on my albums but when I was a little girl despite growing up in a household where I was surrounded by blues music, all I wanted to listen to was MJ. I’d watch his videos on MTV and record them on VHS and play them on repeat  ‘til the tape would break. I was obsessed with him. I had his posters all over my wall and stickers of him from smash hits magazine all over my wardrobe door. I would watch the videos of ‘Heal the world’, ‘Man in the mirror’, ‘We are the world’, ‘Will you be there’, ‘Earth song’ etc and that was where my dream began; at 7 years old watching Michael Jackson videos I decided when I grew up I wanted to be a singer and a songwriter and I wanted to use my music to help children living in poverty.

GGM: What is your favorite film?

Dani: Sister Act 2 – Whoopie Goldberg and Lauren Hill – What more could you want! 😉

Dani: A Thousand Splendid Suns by Khaled Hosseini. It’s like a modern day Romeo and Juliet  in regards to the power and impact of love and betrayal and it’s set in Afghanistan from the early 1960s to the early 2000s.

I was lucky to see Nina Simone before she passed away. I’ve also seen some of my soul heros from Stevie Wonder to Smokey Robinson who were both sensational. Foy Vance, an incredible Irish Singer and Songwriter is my most recent favourite concert though. I’m hoping to get to see Gregory Porter live this year though; I love his voice and his song-writing.