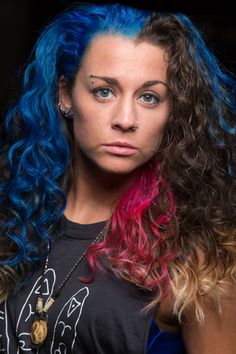 Chaser Eight is a female-fronted melodic, alternative rock band from Connecticut comprised of band members *AUDRA* (lead vocals, guitar), Pat Walsh (lead guitar, vocals) Pete Giannini (drums), Billy Wang (bass), and Aaron Tagliamonte (keyboards, guitars). Although the band has released four self-made albums together, earlier this year they released their eponymous album stating since it was their first studio album, they wanted to do it right.

And right, they did! The album highlights *AUDRA*’s emotional and haunting vocals in songs like “Lead Me Down” and “8 AM.” She then leads you into catchy tunes like “On Top,” the drum heavy, poppy beat in “Major and Minor,” to the slower, emotive song “To Find Him,” followed up by rock tunes “3 Day Bender” and “Go Home.” Closing out the album are “Just Riding,” “Moving On,” and a great heavy hitting rock tune “I Wanna Die” full of guitars, drums and even a synthesized voice in the opening. One hck of a good band — this band has proven that they are serious and ready for airplay.

Recently, Guitar Girl Magazine had an opportunity to speak with *AUDRA* from the band about their music, how the band was formed, and what’s next on their agenda.

GGM: How would you describe Chaser Eight music to those who haven’t heard it before?

*AUDRA*:  It’s just rock music, maybe borderline on alternative and maybe a little bit harder sometimes; but for the most part it is straight up, classic, you know old-school rock, good old-fashion rock music.

GGM:  Where did the name Chaser Eight come from?

*AUDRA*:  It’s really up to the listener’s discretion on that, we really don’t have a real origin for it. We come up with a different story every time we tell it, but it really doesn’t come from anything. We just kind of picked it out of the air because we realized that we never wanted to be one of those bands that put a lot of wish in our name and we wanted our music to speak louder than what our band name was. So, that’s kind of where that came from and we just threw something together and that’s what we came up with.

GGM:  How did the band form and where does the band come from?

*AUDRA*:  So we started off, the guitarist, Pat, and me. He and I have been playing music together since we were like 10 years old; we’ve been writing music and so we’ve been together for a really long time. We went to college, different colleges, and then kind of formed into other bands. We had always seen ourselves coming back to one another and when we were back home — we grew up like a quarter mile from each other — we would always find each other creating and making music together. So, that was me and Pat.  Then in high school we encounter Randy and had a bunch of songs and played them together and we entered a bunch of different battle of the bands that was happening in high school; and he said to me not to worry about it, I’ll form the band and you just play your songs. So he formed the band and he brought Bill, our bassist, into the band and so Bill has been playing with us since that point — since we were 18.  So, Pat, Bill and I have been playing together since we were 18! Then just through meeting and working at the same place, I met Aaron and Pete. Aaron and Pete played in the same band together and had been playing together for a long time, and you know they’re best friends and we just kind of asked them to join up with us. Through a couple of line-up changes, we asked them to join us and we’ve been playing together for about two years now with this same line up. It’s been great! We are like one big family. We’re were all very close and we all have a lot of history with each other. We are one big happy Chaser Eight family!

GGM:  You released a new album earlier this year. Tell us a little about it…name, singles from the album?

*AUDRA*:  The name of the album is “Chaser Eight.” We made it self-titled – I know it is a little odd to do. This is our fourth release but because it was our first studio album, our first full-length album, we wanted to do it right and also again with names we did not want to tie or attach a name to it that was going to take away or pigeon hole the album in one direction. We felt just naming it Chaser Eight wasn’t going to pigeon hole it and would leave it completely open to interpretation about what it was. Some of the singles are we started with were “Lead Me Down” and “3 Day Bender” – and now we’re promoting the whole thing and putting out videos like“I Wanna Die” is the last track – so just a bunch of different things going out right now.

GGM:  Are you planning on touring?

*AUDRA*:  We toured over this summer with another band, and we’re still touring and planning shows. Earlier this year we had a couple of album release shows and we did a residency in New Haven which we played every Monday night in March. Just really getting out there and promoting the album.

GGM:  What is one of your favorite experiences throughout your career so far?

*AUDRA*:  Definitely when we got to play at the Wolf Inn, such a huge venue up at a casino in Connecticut. Many, many famous acts have played there, so it was just a great venue and that was a lot of fun. Looking out into the crowd and seeing people sing your songs – that’s a very cool moment – and that has been happening a lot more especially with this new album with so many people going out and getting their hands on it and coming out to see us. Seeing that and knowing you worked on something and people learned it and they’re saying it back to you is very reassuring.

GGM:  Is there a band that you haven’t toured or collaborated with that you want to?

GGM:  Do you have any advice for new bands or musicians coming up?

*AUDRA*:  The thing I find is a lot of people forget this is a business .as well as it is fun and creative, but you have to be creative and business-minded. I feel like a lot of bands, and a lot of young bands, forget that this is a business and they stop treating it like a business and they get a little sloppy on that end. So, the one thing I can say to any band coming up, whether young or old, being professional goes along way. Bad word of mouth travels a lot faster than good word of mouth, and if you don’t act professional, a lot of bands are not going to work with you. There have been bands whose careers are excellent and they are great musicians but are terrible business people, and that is enough for me not to want to play with them anymore or not be involved with them. So be professional in all aspects and really be on your toes. Also looking professional by having your own .com website that you own that is not like Twitter or Facebook or whatever … just having something that you own, having control of your social media and being on top of that and being out there and really connecting with fans – having a personal connection, shaking their hands and talking to them and making a real personal connection with them and making them feel important because they are important, they are the people who come and support you. Really get out there and be professional and personable, and be nice and humble. You know we’re not doing anything ground-breaking here, we’re all trying to do something we love and do it for the rest of our lives. So be humble, man.

*AUDRA*:  We are going to be releasing a few acoustic songs from the album, four acoustic versions from the songs on the album, so completely stripped down and a different take on them from what you heard on the album. And then by the end of the year, we will be releasing two new singles. So really just going out and playing shows and getting in front of new people and constantly just pushing this new album. This album took over a year to make and we think we owe it to the album and to ourselves to just really get out there and push it. Then just releasing some new content and playing shows everywhere. Playing shows and making new music, that’s the goal!

GGM:  Where would you like to see yourself 10 years from now?

*AUDRA*:  In 10 years I would like to be a professional musician playing on big stages every single day and getting on the tour bus and traveling to the next place or getting on the plane going to the next place. To be surrounded by the four same guys – I want them all there and playing every day and being successful and being able to do it for the rest of my life and not have another job. Just doing music and being around my guys and my friends and making everybody a part of it. That is one thing we try and do- make one community and make everybody a part of it. Surround myself with people I love and play music every single day.

Thank you to *AUDRA* from Chaser Eight! The album is available on ITunes, Amazon, and on their website.  To find out more about them, visit their site HERE.