Home Interviews Diamonds Under Fire: Mining Their Way to Stardom 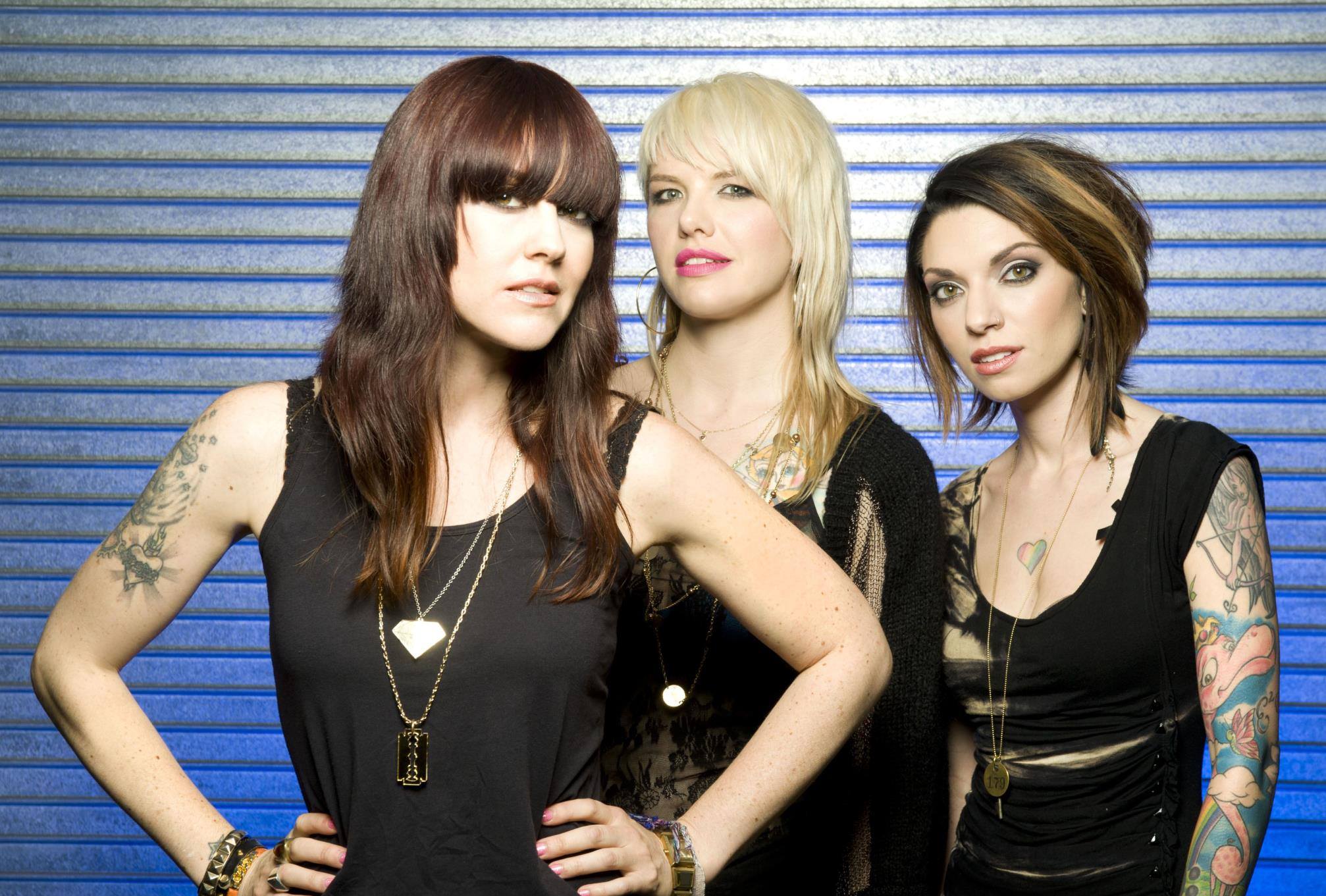 Last fall, I was listening to an episode of a webcast out of Pennsylvania entitled “On the Rocks.”  It was during that episode when I first found out about a Los Angeles-based, hard-rocking female trio called Diamonds Under Fire.

With a sound that has the feel of 1990’s grunge mixed with superb vocal delivery, Diamonds Under Fire are the kind of band that is mining its way toward rock stardom. Guitarist and lead singer Vanessa Silberman started Diamonds Under Fire back in 2005 as basically a solo project that played throughout the Los Angeles area, as well as toured the US, Canada and Britain.  Just last year, though, was when it went to the next level, as bassist Melinda Holm and drummer Jessica Goodwin joined Vanessa.

How did Diamonds Under Fire evolve to what they are today, and would they compromise what they’re about if they were to get signed by a major label? I put those and other interesting questions to the ladies themselves.

Steve: Let’s begin by asking where each of you are originally from.

Vanessa: I grew up moving around a bit, mainly living between the San Francisco Bay Area & Kauai, HI.

Jessica: I was born and raised in Sin City –Las Vegas, NV.

Steve:  My next question is for Vanessa.  Since Diamonds Under Fire have been compared to the likes of Nirvana, Pink, No Doubt, and such classic rockers as the Ramones and Chrissie Hynde, would you count any or all of the above artists as your musical influences, as well as explain the retro-grunge approach your band takes?

Vanessa: I would definitely consider everyone you mentioned as some sort of influence, if not musically then career-wise, music fashion icons or as people who I really respect –especially since they paved the way. Nirvana was the first band that caused me to pick up the guitar so maybe that explains some of the ‘retro grunge’ feel you hear. Though I always try to take the approach of focusing on the song writing, like a great song is a great song & you can produce it however you want. I just chose to produce the past music pretty raw because it naturally appeals to me and because I didn’t have a big budget to hire an “A-List” producer –I did it mainly myself.

We collectively as a band listen to everything from pop and punk to dance and hip-hop to electronic music. I think with the new songs we ended up digging really deep to bring out the spirit of all those different influences in the sound & feel so what you hear is a more varied approach but still Diamonds Under Fire.

Steve: Vanessa, what did you do, as a musician, prior to starting Diamonds Under Fire literally by yourself?

Vanessa: As soon as I got my first guitar, I started writing my own songs immediately. I also jammed / played with friends & other bands growing up and in LA as a guitarist –but not that much. I even went out on a few Berry Squire auditions when I first moved to LA but I always felt better singing so I played solo and constantly tried to recruit band members, which always ended up being different incarnations of what Diamonds Under Fire would become.

Steve: Vanessa, I saw a YouTube clip from 2011 in which Diamonds Under Fire opened for Uh Huh Her [which features singer/actress Leisha Hailey].  If what I noticed on that clip was any indication, it was just you and a drummer.  How did you land that opening act slot, and who was your drummer back then?

Vanessa:  Before Jessica & Melinda joined the band, Diamonds Under Fire for a long time was just me (with the exception of Bryan Stage from My Satellite, who played bass for a short time in the band). I’d usually tour as a two-piece and not as a full band because economically it didn’t make sense. The drummer for that tour was a friend / session player by the name of Tim Spier. I met Uh Huh Her through their manager, Kerri Borsuk, who also was a mutual friend who helped manage me at the time. Uh Huh Her asked if I wanted to open up for them and I said, of course, yes. Uh Huh Her was a blast to tour with and are very talented.

Steve: Following up on that, my next question is for Melinda and Jessica.  How did you two join Vanessa to become the current Diamonds Under Fire lineup, and what did you each do prior to that?

Jessica: Prior to Diamonds Under Fire, I was in the rock/electronic duo Volcano Dolls. Vanessa and I met through a mutual acquaintance, Isaac Heymann, who knew I was in between bands. One day I got a call from him saying that he had a friend (Vanessa) that was looking for a drummer and thought she and I would be a perfect match. I got in touch with Vanessa, auditioned, and the rest is history!

Melinda: I had just moved to LA and was working on learning songs to go on tour with my friend Kim Talon’s band, JAN.  Vanessa heard about me through my cousin, Jamie Holm, and her band Sick of Sarah.  She pursued me online and via text for a while before we met.  It was very romantic. A true rock courtship – – – Before that, I toured with Har Mar Superstar, and played in a band called Fur Pillows with Har Mar, Jonny Kelson, and Charles Gehr. I think we’re still a band, we just haven’t gotten together for a while.

Steve: Any of you can answer this:  Diamonds Under Fire played L.A.’s famed Viper Room last December.  How did the crowd react to this current lineup?

Jessica: The word on the street is it’s their favorite DUF line-up yet! I didn’t actually see the crowd’s reactions on stage seeing how my hair was pretty much in my face the whole time, but after the show, we got a great response!

Melinda: Our first show with this lineup was at Viper in August for the Sunset Strip Music Festival. People told me they were surprised it was our first show together. I kind of was, too.  I think we have a very natural chemistry between us just as people and that comes across on stage.  The crowd was totally still into it at our show there in December, so I guess we’ll stick together.

Steve: Again, for any of you to answer:  As a band that is out to “make [its] own rules and [its] own path,” would signing with a major label, and the rules that come with it, put that philosophy into question?

Band answer: Great question! When we say ‘own rules & own path’ we are talking about the music / message being created by us (artists) dictating which direction labels and listeners go in. We can steer the market place.  It’s in our hands to “make our own rules and own path.” We’re working hard to write great material, play amazing live shows, have identities, have developed ideas and opinions – we’re out here building our own image and brand – a label shouldn’t tell us who we are, we should tell them and it should be clear through our music.  Working with labels, management, etc. is collaboration and collaborations can be hard, but the rewards most often outweigh the challenges when you work as a team.

It’d be great to sign with a major label and we don’t see any reason we couldn’t have a great effective partnership with one who believes in our philosophy. We aren’t performers looking for a message, songs & someone to tell us who we are. We are a band: three professional musicians with personality, who want to help people through music, change the world, play for the rest of our lives, to reach a lot of people and make a living doing it. If there’s a major label out there that can get on board with that – and we believe there is – they’re welcome to join the team.

At the end of the day, Rock ’n Roll isn’t safe and doesn’t play by the rules to begin with –major labels know that. As an artist you get questioned every day but we didn’t come into to this life to have someone else tell us our own philosophy and how we are going to live it. Staying true to yourself and your beliefs is a constant challenge we all face in life.  It’s not unique to record deals. Instead of worrying about it and making more rules and obstacles, we’d rather grab the monster by the heart and live out loud.

Steve: Here’s a fun question for the three of you:  What was the first major rock concert you each went to?

Melinda: I saw Michael Jackson with my Dad’s best friend as a kid, but the first one on my own was The Cure. I wore that t-shirt every day for at least a year.

Steve: Back to Vanessa, I would like to ask about your upcoming album:  Who is producing it, have you come up with a title for it, and when are you expecting it to be released?

Vanessa:  John ‘Lou’ Lousteau is producing the EP with us right now at the Foo Fighters’ Studio 606. The title is to be announced and there isn’t an official release date yet, but we are shooting for early Spring and we are very excited to put the new music out.

Steve: Finally, for all three of you, since Diamonds Under Fire has that retro-grunge feel going on, would it be safe to say that you’re bringing grunge back?

Melinda: Maybe nodding to it in some small ways, but not bringing it back.  There are other things from the ‘90s I’d rather bring back.  Like Riot Grrrl.  Let’s bring that back instead.

Jessica: I wouldn’t go that far and say we are bringing it back. I would say that it’s a prominent influence in our sound, but I wouldn’t label ourselves a grunge band. Also, I don’t own any baggy flannel shirts. Ha!

Vanessa: Bringing it back maybe with a very 2013 twist… like in a sincere “[Smells Like] Teen Spirit,” “I Love Rock ’n Roll,” fun “Since You’ve Been Gone” kind of way. Ha. But honestly, as we grow and evolve as a band I hope we can offer people a new musical experience. Like something that sounds familiar yet is excitingly new & different.

And it’s an experience that you can look forward to when Diamonds Under Fire hit the road real soon.

Diamonds Under Fire are online at www.diamondsunderfire.com.  They’re also on Facebook at www.facebook.com/dufmusic and on Twitter @dufmusic.