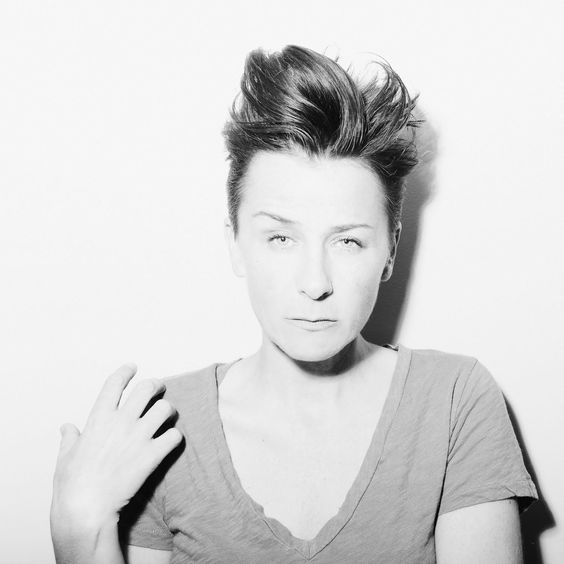 Singer-songwriter Melissa Ferrick maintains a busy tour schedule, all while running her own record label, Right On Records, and teaching at Berklee College of Music.

Ferrick was raised in Ipswich, MA and introduced to music at an early age by attending North Shore jazz clubs with her band manager father. While in elementary school, she learned to play the violin, trumpet and bass guitar, and later at 16, joined the New England Conservatory’s Youth Orchestra and Wind Ensemble as a trumpet player. Ultimately attending the prestigious Berklee College of Music on a scholarship and picking up the guitar, she continued to pursue her music career playing Boston’s local music scene. After several years, she left Boston and headed to New York to hit the local music scene and learn the music business.

Ferrick’s latest release, her self-titled “rock folk” album, is described as a “solo effort in its process, creation, and release.” We had a chance to learn more about Ferrick and her latest work where she shared with us her background in music, her instruments, and her work at Berklee.

Recently releasing your self-titled album on your own label Right On Records, can you tell us a little about your new work and the inspiration behind it?

This new album was written over a shorter period of time than others, about a year. This helps in the continuity in the theme, which is resolution. Releasing this album on my own label again was a really thought out decision I made in early 2014. I am thrilled to be able to be handling this release both creatively and financially.

What one track off the new album would you say best defines you?

You recorded this in your home studio. What’s your studio set-up?

I have a bunch of analog outboard gear, some nice mics, tons of pedals, and I recorded this project on an old Yamaha 4416. I did this on purpose, to constrict myself to 16 tracks was part of the creative process. I have Pro-Tools and Logic Pro but didn’t use either of these platforms on this record. This album was mastered at Gateway Mastering in Portland, ME with Adam Ayan.

You keep a pretty grueling tour schedule. How do you manage your time for touring, teaching, running your own record label, and still having a personal life?

Great question:) The short answer is, it’s really hard. I am learning how to navigate this. The teaching position at Berklee started four years ago and I am feeling like I am now able to really integrate it into my life. My personal life is great, my touring life is going well, it’s been difficult with my shoulder acting up but I am working very hard in PT and alternative care. Basically what I do is I work very hard at staying and completing the day I am in. I set goals every morning to complete, I work well from “to do” lists.

How did you first get involved in music and what path did you pursue to further your talents and start a career as a musician?

When I first moved to NYC in 1990, I got a job at Chrysalis Records in their radio department as an assistant, and I also worked at Right Track Recording Studios answering the phone, making coffee, and booking studio time for clients. This really helped me learn a whole lot. Then when I was an artist at Atlantic Records, I learned so much by being around professionals in the industry who had been working major label releases for years. I learn best by immersing myself in the environment, I learn well by watching and then doing.

After beginning with the violin and several other instruments, when did you pick up the guitar?

My parents split the cost of an acoustic guitar with me on my first day of college at Berklee in 1988. I still have it:) I was at Berklee on a trumpet scholarship, so the guitar really took over my life I would say by my third semester. I did play a little guitar in high school, but mostly at that time I was playing and studying bass guitar and trumpet.

What guitars do you play?

A 2000 Collings sunburst OM3 is my main guitar, my favorite. I own another Collings, a few Martins, a Gibson Hummingbird, and my original Takamine.

How do you feel you’ve progressed as a songwriter and guitarist over the years?

I am a better writer because I take my time with my songs now, I don’t just write whatever comes out and that’s it. I used to not believe in re-writing when I was young — this was an arrogant stance, but I am glad I was the way I was. I think being that trusting of the “in the moment writing” helped make me a less fearful writer.

Who were your first musical influences?

Not only a musician, you’re also an Associate Professor at the Berklee College of Music. Tell us about your work at Berklee and the advice you give your students?

I teach a course I wrote called “Launch Your DIY Career” to students who apply and are accepted into it. I am a member of the Songwriting Faculty at Berklee and I just love my job there. The students are the reason I teach, they are amazingly talented, full of wonder, and question just about everything which I love. The students keep me focused, current, and have a way of keeping my spirit alive. I teach what I know, what I have done, and what I continue to do on the ground. I try to bring the “real world” into the classroom. I am a big fan of “flipping the classroom” so we do a lot of actual work during class. I feel like a tour guide a lot of the time, I have a set course with a destination but how and at what time we get there is usually different than how I expected — the students have a way of making the trip different and exciting every time. I am in charge of making sure we land.

What decisions in your life have made the greatest contributions to your success?

This makes me think about living as closely to the Prayer of St. Francis as I can every day. The decisions that have brought me the most success have been one’s that were made purely out of care, not seeking personal gain. When I look back, anytime I made a decision based in greed, it didn’t work, or brought on negative results internally. Honesty, Integrity, Discernment, Self-care, taking at least 24 hours before every major decision, these types of things, these lessons, have brought me the most success and the success I am talking about is not in money, it’s in my ability to rest peacefully.

What is one of the best lessons you’ve learned so far in your career?

There is always someone else having a worse day than me.

What do you know now that you wish you had known 20 years ago?

That I don’t know how to do everything, that asking for help is not a weakness, it’s a strength. That listening and learning are actually more rewarding than talking and doing.

For more on Melissa Ferrick, visit her website HERE.