Home Interviews Girl’s Got Rhythm: Laying Down the Groove with Rachel Gonzales 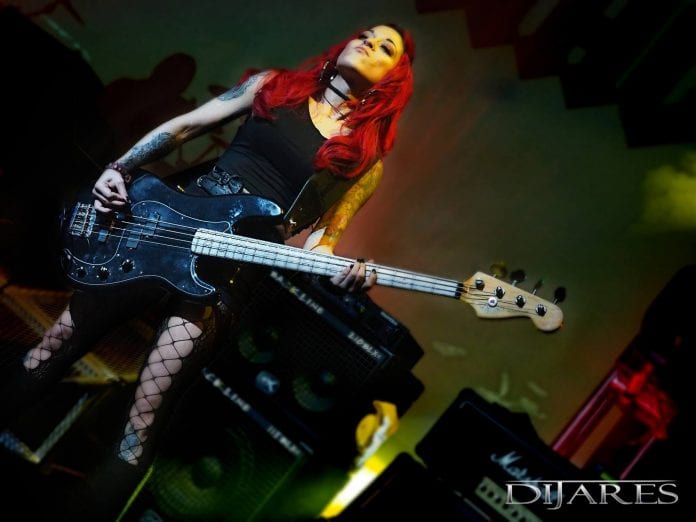 Rachel Gonzales (known as Rachel G) is a hard-working bassist with a lot of rhythmic energy. She performs in a variety of bands throughout the Las Vegas area, and on any given night you can find her holding down a groove. Her main stints include the AC/DC tribute band Thigh Voltage, the top-40 JetSetClub, and the four-piece Every Woman, which recreates tunes by female artists throughout the decades.

Originally from Texas, she fell in love with the vibrant rhythms of Tejano music, as well as many other styles from prog rock to metal. Guitar was her first instrument, but she switched to 4-string and found her true calling.

Today, she focuses her playing on what’s best for the song but knows when to add a bit of flair. “I definitely play by feel and groove. I’m not super flashy, but I lay it down solid and keep the groove going with articulation.” She prefers playing with her fingers but uses a pick for certain songs. “It depends on what drive I’m looking for. I play what the song requires but as dynamic as possible,” she said.

Well-versed in many styles of music, Rachel’s booked solid but is also looking ahead. “I’m currently a full-time musician making a living, but I also want to start a solo project in the near future.”

Rachel put down her bass for a bit to check in with Guitar Girl about all things low-end and funky.

How did you learn bass? What led you to it?

I picked up bass in 2004 when my friend’s original band needed a bassist. I was fluent in guitar at the time since I had been playing guitar for six years (since middle school). So, switching to bass seemed easy enough. I knew all their songs by heart, so I figured that I could make the switch.

Then I was passed down a bass and an amp from a friend whom I had met in passing at my work place (a traveling musician named Kevin), who didn’t need his gear anymore. That really got me learning and perfecting the basslines. It was definitely a challenge, but I was determined.

What players inspired you?

As a kid, my mom listened to Tejano music, so my inspiration came from that kind of music. But I was really in awe and inspired by Selena Quintanilla-Pérez! She had the look, the fashion, and the dancing down and could sing! I wanted to be her. She inspired me to continue down a musical route before I even knew what music was. As I got older I was into rock and metal. In middle school I was into Kittle (the all-girl metal band in the ’90s). Then in high school I had a wide range of inspirations. I absorbed almost anything. I was into classic rock, prog rock, and metal. Pink Floyd, the Doors, Stevie Ray, Incubus, Rush, Tool, Mars Volta, to name a few.

Do you prefer playing with a pick or your fingers?

I prefer playing with my fingers, but lately I’ve been using a pick. In my AC/DC tribute group (Thigh Voltage), I do use the pick. And in my other bands, some songs do sound better with a pick. I like to experiment with tones, sounds, and articulations.

When you play different styles of music in one show, how do you adjust your tone?

Since you play a lot of songs for various gigs, how do you go about learning new tunes?

I do! Too many! Since I usually don’t have lots of time to learn every note by ear, I do cheat. I use YouTube and a site called Songsterr to look up tablature and to see how others play it. I pull up Spotify as well to listen to the original, then I go back and forth to get my own gist of the song. If I still can’t get a gist, since some songs don’t actually have basslines (they only have keys or synths), I look up bands that cover the song to see how they do it and/or also recreate a line that works for the song.

Do you play a 5-string on certain songs?

At the moment, I only use a 4-string. I’ve been meaning to get a 5-string bass that isn’t too heavy, since I perform for long hours. Since I play a 4-string, I do tune-down my top string if need be or tune the bass to E flat if I need to.

What’s one or two of your favorite basslines, grooves, or passages? I love “Another One Bites the Dust” and early disco tunes!

OMG, yes that one is so great and disco! I have more than one or two, but if I had to pick two: “Footloose” by Kenny Loggins and “Rio” by Duran Duran. There are many more, but for those two I get super hyped. My hands are moving the whole time! On those two I really work hard (laughs), but they are so fun to play, and I am exercising my hands at the same time.

Do you prefer P-Bass or Jazz bass?

I play on a P-Bass with a P and J pickup, so I do get the best of both worlds in one. I do prefer a P-Bass with both pickups, ha-ha. I used to play a Fender Geddy Lee Signature Jazz Bass—it was so awesome, but I ended up swapping it for the one I have now. I definitely miss it; I will buy one again, someday.

Tell me about Neck Illusions, and why do you like them on your basses?

Neck Illusions is an accessory for your bass or guitar. The decals hold up great with the extensive amount of playing, sliding up and down the neck, and slap bass; the decals are still running strong. My favorite part is that it’s totally noticeable and sets you apart from other musicians who have basic guitar necks. I usually have multiple people tell me how cool my fretboard is at my shows!

What inspired your Neck Illusions Flower of Life design? (The design has ancient Roman numerals as fret markers with floral designs in the background.)

My inspiration for the Neck Illusion design was to get something that was a little geometrical, since I think music is kind of like math. And I just love the art in sacred geometry! I’ve also always liked the boldness of the Roman numerals and thought it’d be cool to combine both into the neck design.

Once you got your awesome playing skills down, did you think about style and image?

Yes, always! That is just as important. I mean if you want to take it to the next level. I’m a girl, so I do always dress the part. The makeup, the outfit, the stage presence, engaging with the audience, it’s all important to me. Even as a kid, I watched videos on VH1 and MTV and even recorded them on VHS and rewatched them over and over to mimic the true rock stars.

When did it hit you that you were a true bassist?

After finally getting the grooves down, I fell so in love with playing bass that I never went back to guitar. The bass had become a part of me, and I decided to make it my main instrument.