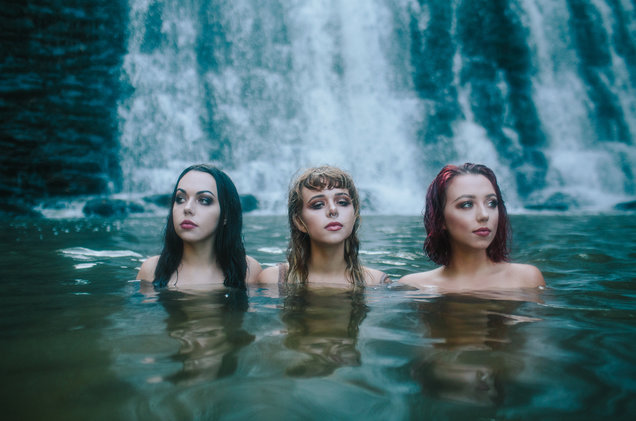 Alongside this notable music, is Von Grey’s outstanding use of eye-catching dark symbolism. This contagious combination of unique visual and aural experiences sets Von Grey up as an unmatched talent whose presence is near impossible to ignore.

Following the release of their latest EP, Trinity in December of 2018, we caught up with Von Grey, inquiring about their influences, how being sisters has impacted their music, and what fans can expect from them for the remainder of the year.

Growing up, were your musical influences and tastes similar?

Surprisingly, or maybe not so surprisingly, no! We’ve all definitely loved many of the same artists, but Annika’s taste has always skewed more alternative, Kathryn’s is more pop (Britney lover), and I generally dig more urban and soul music.

At what age did you begin playing music together?

We all started classical training when we were five or six and about three years in, we began experimenting with playing music together classical music first, then slowly found our way to more contemporary styles of music.

At what age did you collectively decide to take it on professionally?

Some time in our early teens we all decided we’d like to embark on a more serious musical path and began touring shortly after.

Von Grey has such a distinct aesthetic; where was this derived from? Was it a collaborative process amongst the band?

Thank you! We are all lovers of visual art and enjoy the process of working together to conceptualize our own visual content. Incredible photographers like Annie Leibovitz and Ansel Adams as well as many artists of other mediums have influenced us to create an aesthetic of purpose and let it manifest purposefully in our visuals.

Have there been any sister groups, past or present, that have inspired your career or sound?

There are so many incredible sister groups out there that have absolutely enthused us in our art. Tegan and Sara, CocoRosie, Heart, First Aid Kit… I can’t say that we’ve been influenced by one particular sister group, but there are several that we’re fans of and respect greatly.

In the creative process, does each sister have an assigned role, or can this vary from song to song?

Annika and I usually begin the songwriting process, although that can vary. Annika is an incredible poet and lyricist, and once the bones of the song are created, Kathryn adds musical embellishments and harmonic accents.

How do you feel your relationship as sisters impacts your music?

The honesty and trust in our sisterhood definitely allow for a creative process that encourages vulnerability and ultimately creates music that is unapologetically honest. We have also been singing together for so long that we’re able to improvise vocally in our live show and play off one another, which is very fun!

Do you feel there are any challenges sister bands face that other groups may not encounter?

On the other side of our closeness as sisters, we have the dangerous power to push each other’s buttons at times! We’ve grown to be respectful of each other’s space, but it has come with challenges over the years.

Do you feel there are any advantages to being a sister band that non-sibling bands may not have?

Absolutely! Just growing up together and having had the ability to tour in close quarters very easily. We also have a creative understanding of each other’s musical background and our influences that, when we come together to create, we mesh well to form a collective vision and band.

Are there any favored brand of instruments or gear amongst the ladies within Von Grey?

We love KORG keyboards, Infiniti Drums, MOOG, and most anything made by Gibson.

With the release of Trinity in December of 2017, is there a standout song that the band feels most proud to have created?

“Poison In The Water” was an important song to us to release because of the lyrical content. The song was written during the last election, and it was our way of working through thoughts in lyric form that were politically charged, but not overtly obvious without knowing the backstory.

We’re generally proud of the whole entire project and are excited to continue releasing music and remake a few songs off of Trinity in our upcoming release In Bloom.

The “Poison in the Water” music video is visually outstanding and incredibly complimentary to the song. When creating the music, do you already have an idea of the images you’d like to have associated with it?

Thank you very much! We do love to think of colors and landscapes when we are writing and recording. We had a loose concept for the “Poison In The Water” video before we completed the recording! It called for vast imagery and beautiful landscapes. That video was the first piece that we ever filmed and directed on our own, so very happy to hear you like it.

What can fans expect from Von Grey for the remainder of 2018?

We just wrapped up a spring tour, lots of exciting new visuals, we’re releasing an EP In Bloom of self-produced acoustic songs on July 20th, and hopefully, we’ll be rounding out our touring plans for the rest of the year soon.