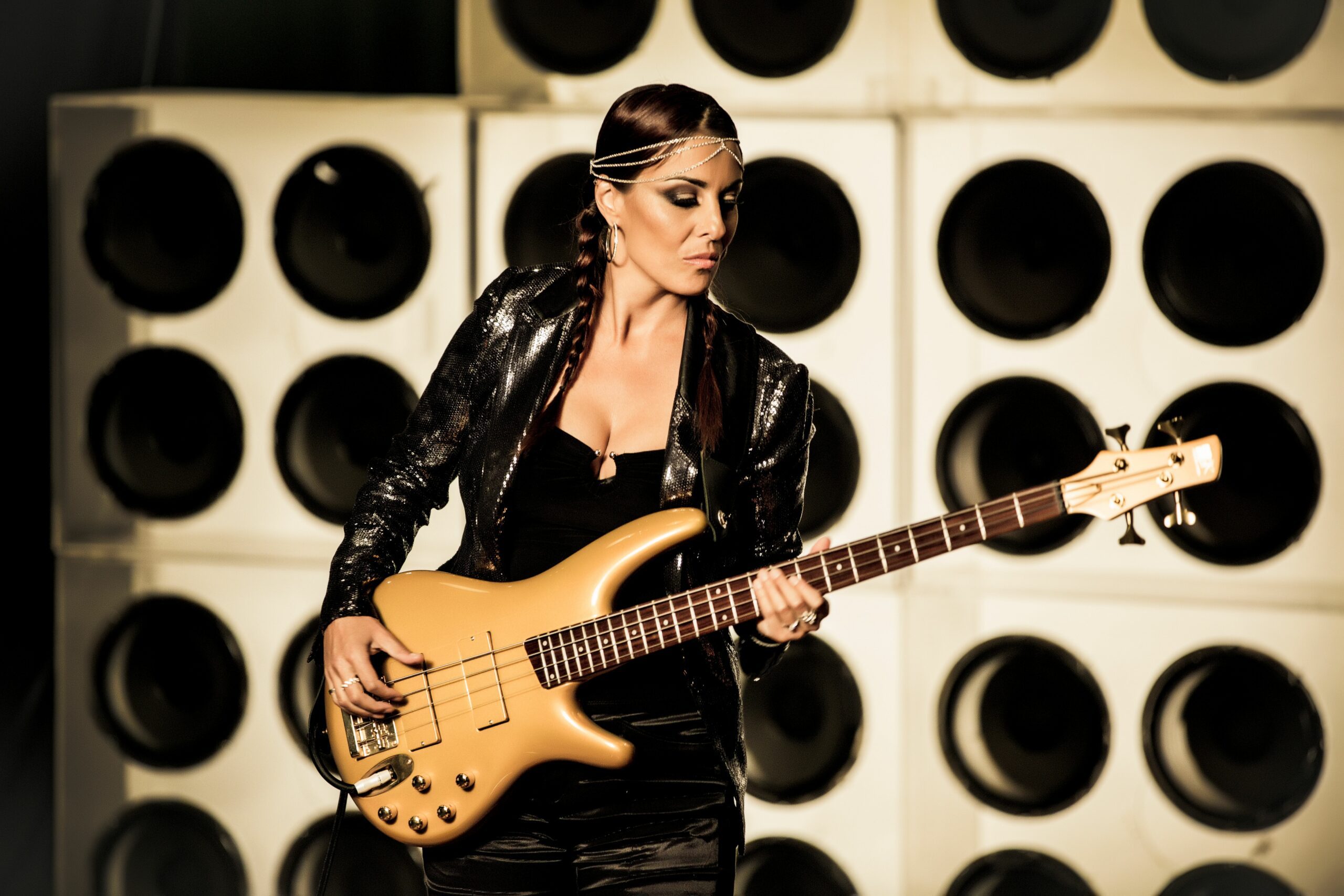 “An important thing I learned from Prince is to be 100 percent in the moment and in the music,” shares Ida Nielsen about working with her former bandleader. “That’s what made his concerts so magical. They were always soulful and special because he meant every note he played with his heart.”

She takes this attitude with her in her performances as well. An off-the-charts funk player, watching her perform is like going back in time to a classic ’70s show with players Bootsy Collins or Larry Graham—players she is completely inspired by and honors in her work.

The Danish multi-instrumentalist and composer started playing with Prince in the New Power Generation in 2010 and then in his funk trio 3rdeyegirl from 2012 to 2016. Before all that she studied at the Royal Academy of Music in Denmark. And to date, she has recorded four solo albums, with her most recent Time 2 Stop Worrying (bout the weird stuff) released earlier this year.

Live, her high-energy funk shows are packed with “good vibes” and “tight grooves.” Her signature Sandberg bass helps her achieve a versatile mix of sounds; at times she goes for a vintage P-Bass tone just like any good funk player has for decades.

Like one of her song titles proclaims, let’s “rock the bass.”

What led you to playing bass?

It all was a coincidence really. I grew up in the countryside in Denmark and went to a small school that had a great music teacher, and there was a lot of musical activity going on. I was singing in an after-school choir, and one day a girl asked me if I wanted to join a band she was singing in. They had a concert planned, but their bass player quit. I thought “why not” and went for it. I didn’t like it at ﬁrst though; I thought it was pretty boring. But then at the same concert, there was this band of young boys playing funk music, and the bass player was fantastic! I was completely ﬂoored and went home to try and do what I saw and heard. That was basically the start of it.

I love early funk players like Larry Graham and Bernard Edwards. So many classic songs that make you want to get up. What players inspired you?

Ahhh. There are SO many! I’m always scared to forget people, but here are some of the players I listened to the most over the years, in random order of course: Prince, Larry Graham, Marcus Miller, Bootsy Collins, Victor Wooten, Pino Palladino, Jaco Pastorius, Meshell Ndegeocello, Rocco Prestia, Steve Bailey, and Flea. I keep discovering great players as well. There are so many great ones out there.

Being a funk player, how has your playing style evolved over the years?

I think as musicians we are always a product of the music we listened to, and I think you can point out lots of influences by the bass players I mentioned above. They are all there, mixed in with my own personality of course. I also listened to a lot of other instrumentalists and got inspired from their approaches. And I think my style for sure evolved, but sometimes it’s hard to see it for yourself. Since I started my own band, I have a lot of space to play around, and I am sure that is developing my playing as well.

Can you share how you nuance your playing as far as muting and harmonics?

Yes. I love the muted sound, so I often mute with my right hand on ballads. I also play lots of chords on the bass because I think the sound is very warm and beautiful.

How did you come up with the song “Showmewhatugot” (in your turnitup album)?

This is actually one of the few songs I wrote where I came up with the lyrics first. Normally, it’s the last thing I do. I just heard the chorus words and drum rhythm in my head, and then the rest of the song just came along.

Discuss the specs on your signature Sandberg bass or how it suits your style?

I made the bass so it would look and sound good for my own music and for 3rdeyegirl. It has a jazz bass style neck pickup and a Music Man style bridge pickup. The combination of the two makes it possible to create so many different sounds. Since I love ’70’s funk, it can sound like a really old P-Bass; it can also sound like a Jaco-ish Jazz Bass. And the combination of the two makes a very nice sounding bass. It’s good for all styles. And then, of course, there is my signature position, which adds a bit more of the neck pickup; so, the sound is a little bit old (but still modern), if that makes sense? Anyway, that’s the sound I like to use for most stuff.

The thicker pickguard is interesting, with the acrylic plates and fabric in between. (I read that it prevents your fingers from sliding under the strings.) Did you work with the builder on that?

No, actually that was a bonus. I discovered it after the bass was finished. But I am very happy about that!!

What amps do you use, and what kind of tone do you go for?

I use EICH Amps. The amp is a T-900; cabs are 1210S; both 8 ohms. They fit my bass amazingly well! I have a sound that is warm, punchy, and crispy, all at the same time. I absolutely love this combination.

What are you working on now and plans for the future?

I just released my newest album, Time 2 Stop Worrying (bout the weird stuff), in January, and we have been touring three weeks in March. I got home the day before yesterday. So, I am going to Minneapolis in April to take part in the Celebration—an honoring of the unique life and legacy of the prodigiously talented cultural icon Prince Rogers Nelson. After that, I am headed back on tour with my band in May and will be doing festivals in Europe over the summer. And then we will see.

Speaking of Prince, you were one of the last musicians to play with the legend. It must have been a dream gig musically and creatively? What did you learn from him?

It was a dream come true for me. He was always a huge inﬂuence to me even before I met him. So, of course, working very closely with him for almost six years taught me a tremendous amount in every aspect of being a musician. He really was a genius and made us all think of every decision we made, musically and practically, and I feel so thankful that I had the opportunity to watch how he worked from the ﬁrst row, so to speak. I learned so much about playing, arranging, and producing. I keep diving into that pool of knowledge in my musical life; both for studio work but especially for my live performances.

What do you love the most about what you do?

I love to write and play music! So, I feel very lucky and blessed that this is actually my job. I see how people are happy when we play our show, and that makes me really happy too. When you’re a bandleader, there is a lot of extra practical stuff you have to deal with (which can be quite hard), but in the end it is super rewarding to be able to play your own music! If you follow your dreams, something good will always happen!

Explore Ida’s music, gear, and more at her website at idanielsenbass.com