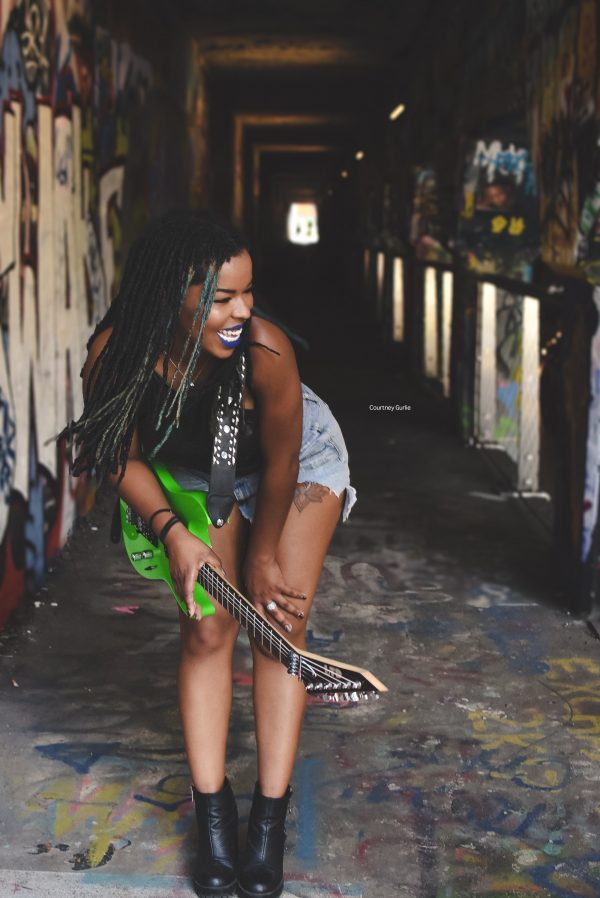 Atlanta native Gabriella Logan, who also goes by Guitar Gabby, is the manager, lead guitarist and vocalist for the all-Black female rock band, The Txlips, who also play as the backing band for local rapper, Diamond. This young 25-year-old woman graduated from Spelman University and is currently studying law at Vermont Law School.  And if that isn’t enough, she works for a local non-profit organization.

She started playing guitar as a young teenager determined to portray a sound she could hear in head to those around her. With her first guitar in hand, this young lady went on to teach herself, heavily influenced by the likes of Steve Vai, Jimi Hendrix and Sister Rosetta Tharpe, to name a few. She soon realized the lack of diversity for female guitarists, and it has since been her passion to inspire women to pick up an instrument and play!

Gabby is endorsed by major manufacturers Ernie Ball, Curt Mangan, Empire Ears, ESP Guitars, Mono Creators, Stacks FX, and Laney Amplification.  Gabby and the band have spent a good portion of the year practicing, writing and performing, most recently appearing at the AFROPUNK Festival in Brooklyn. AFROPUNK Atlanta is scheduled for this weekend October 14-15 and The Txlips appear in the line-up on the 14th.  They are currently working on a new EP due out Winter 2017/18.

For information on the AFROPUNK Atlanta Festival, click HERE.

We met up with Gabby to learn more about her background, interests, inspirations, future plans, and her guitars!

Tell us about your first guitar and how old you were when you started playing?

My first guitar was a Johnson…lol. It was a cheap starter guitar my mom bought me when I was about 13 years old.

I read where you are self-taught on guitar. How did you approach the process?

I am! I taught myself how to play because I was always writing music and hearing things in my head that I wanted to portray in sound to those around me. So, I picked up the guitar and taught myself how the guitar works, why it works the way it does, etc. and some 11 years later, here we are!

Can you remember the first song you learned on guitar?

One of the first songs I learned on guitar was actually a song called “Road to Paradise” by a punk band called TAT.

Who are your musical influences and how did they influence you in developing who you are as a musician?

Some of my musical influences are Jimi Hendrix, Steve Vai, Tatiana DeMaria (of TAT), Sister Rosetta Tharpe, Orianthi, etc. These particularly influence me because each of them paved the way in an industry that was not typically flowing in the direction that each of them existed in. Jimi Hendrix came out in a time where you did not see many Black men on stage playing guitar the way he did. Steve Vai set such a precedent with his crazy sounds and skills on a standard 6 string guitar. Tatiana DeMaria is this bad ass Woman playing guitar and singing as the forefront in a punk rock band. And then you have Sister Rosetta Tharpe PAVING a massive wave for Black Women in the early 1900’s. People such as these inspire me to be the greatest that I can be, and I only hope to inspire others such as these greats and more have for me.

Your band, The Txlips, was formed in 2016. Can you tell us how the band was formed and give us a little background on the current band members and what instruments they play?

Yes! So, I was actually called to do a music video for Diamond from Crime Mob. I called Mo (drummer) and we tackled that video together and it looked bad ass (check us out here https://www.youtube.com/watch?v=wz0V1YfB2m4 ). After this video, I had decided that we should come together and create an all-Black Woman band and completely take over. So, I created 2 Lips (at the start we spelled it like this…lol), and we have been moving swiftly through the industry and taking people by storm. Txlips are here!

Current band members alongside me on lead guitar and vocals is Stix McQueen or Mo Drumma on drums, Satarra on bass and Jessica Lloyce on keys.

You ladies are an absolute powerhouse. With that said, what exactly is the message behind what you do and what are you looking to portray to your followers and even the general public?

Thank you! We are looking to portray a positive dope image for women, period. I believe that often times, women are hypersexualized, especially in this music industry, and I wanted to switch that up a little to show the diversity that is women. We are portraying Black Girl Magic, we are showing that Woman literally do it all. We want to inspire Women everywhere to pick up an instrument and just do it. No matter who tells you, you can’t, you can!

For those who have never heard your music, how would you describe it?

I would describe our music as a trip through diversity and culture with an edge. We are so diversified within our rock sound that we can play a little bit of everything. Our music is attitude, it is rock ‘n’ roll. It is dope. 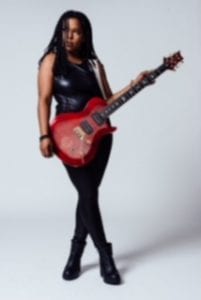 You also play guitar for rapper Diamond. Are the other band members in The Txlips involved in that as well?

Yes! So, the Txlips was initially created to be Diamond’s backing band (called Gurl Code). Whether we play for Diamond or whether we play for anyone, we are still The Txlips Band. It is a dope experience to play different genres and styles whether it is just me or the entire band. That is the dope thing about being musicians- you can switch everything up with just one sound.

Her music is different than the music you play with The Txlips. Do you use the same gear set-up for both and does each band bring out different aspects of your playing?

It depends. If I play for Diamond I will switch up my amp and distortion pedals and depending on the song, I will switch guitars. Each band or artist I play for brings out different and exciting sides of me as a musician, as a guitarist. I absolutely love it. It forces me to expand my horizon over the years to be able to play anything while still having my rock ‘n’ roll foundation.

Your current singles are “Die Today” and “Lost One.” What is the writing and collaborative process for the band?

So, I actually wrote both of those songs when I was in college! Generally, I will bring something I have already written and arranged to the band and we will play the song over and over until it gets together. It is so important to me that everyone is represented as the musician they are so I always write keeping in mind that I want to have lanes for everyone to shine.

When writing songs, what exactly inspired you to make your incredibly unique sound?

Honestly, situations and circumstances inspire me to create sound, music, everything.

You have a new EP you’re working on? What can we expect to hear on it, do you have a release date, and will there be a supporting tour?

We do! We are actually pushing for the EP to be released later this year before Christmas. We actually did a mini tour last year and have many more dates between now and the end of the year. A full year tour can probably be expected within the next two years.

You have racked up quite a few endorsements! Can you give us a rundown on your gear?

I have! I currently am with 7 companies. ARG! My collection of guitars is crazy, lol. I have over 12, but my fav setup and guitars are my LTD M-50FR and my Ibanez RG-120. Those are the two I mainly play on and they are my favorites. My Ibanez is the second guitar I ever bought, so this guitar has been with me through everything. I generally run out of my Fender Ultimate Chorus amp (which has immaculate reverb and clean settings) or I will run out of my 50 Crate.

There are challenges being a female guitar player in a male-dominated industry, which we hope is changing and I think we’re making progress. From my research, you’re all about female empowerment and for promoting black female musicians. Have you faced any challenges, and if so, how did you overcome them?

Yes, the challenges are eternally a pain! This industry has been dominated by men for the longest and I often see and feel women, especially black women, being pushed aside or turned away. I refuse to go with that notion and I refuse to accept it because women are so dope, we are everything, and we do so much work to keep this world running. We WILL exist regardless of who tries to push us away or aside.

I saw where you mentioned Black Girls Rock.  Have you done much work with them?  I have not gotten to work with Black Girls Rock yet! That is my hope very, VERY soon. We met some great people that work for BGR this year at Afropunk Brooklyn, so hopefully something will be in the works here soon.

In November, you are putting on your own show in Little Five Points. Have you figured out a line-up? Also, if you could have any band in the line-up, who would they be?

We’ve actually changed it to a huge Halloween Party on Oct. 30 at Smith’s Olde Bar. We have three dope people on the bill: The Txlips Band, Royal Sun, and Jamee Cornelia. The whole show will be a jam session/party with donations being raised for Hurricane victims.

You’ve got a lot on your plate – The Txlips, Diamond, writing and recording, performing, managing, non-profit work, and school! What’s your secret to managing all of this?

Prayer…lol. It is a lot to keep things going, but as an Aries, it is my job to stay busy and be efficient in all areas. Organization and communication are so very important and those are two areas I pride myself on being dope in. I have to keep the ship moving! Txlips is my baby and I fully intend on us being great and I will carry us to the top.

Top 3 songs on your playlist?

One album you could not live without:  Passion and Warfare by Steve Vai.

In one word, music to me is:  Eternal.

What’s one thing you want people to know about Guitar Gabby?

That I work hard for things I believe in and I just want to be great and inspire everyone around me to be their best no matter what.

For more on Guitar Gabby, visit her site HERE.