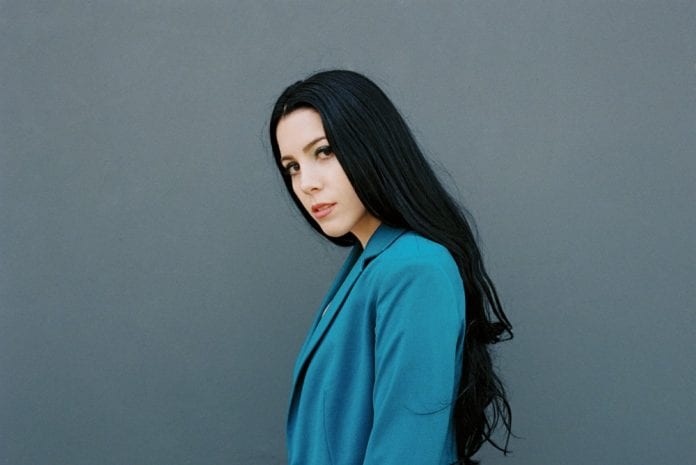 Multi-talented is an understatement for singer, musician, songwriter, producer, and visual artist, Luna Shadows. Crafting a version of alternative pop that is all her own, Luna Shadows aims to create music that represents her interpretation of the world and its happenings.

Equipped with a distinctive sound, which can be described as music enriched with captivating melancholia and paired with an undeniable California twist, Luna Shadows has achieved more than 35 million streams to date. Her recent single, “malibu bb”  was cowritten and coproduced by Luna herself and Boyboy and is the next single on her upcoming album, Digital Pacific, a thematic project comparing reality and expectations regarding both today’s digital age of communication and the environment that surrounds her.

I hardly ever speak about myself with much confidence in my lyrics, which tend to focus on others or lean self-critical. That day, I wrote this song, though, I felt a rare breeze of confidence float through. My aim was to write something complimentary – a sonic end-of-movie moment equivalent, something unquestionably affirming and uplifting. But as I began to write, the best that I could do was compare myself to a majestic but littered beach, with free parking but pollution issues, and nice houses that occasionally burn down. – Luna Shadows

You recently released a new single, “malibu bb.” What was the inspiration behind the music?

I actually have an email that I sent to my collaborator in advance of our songwriting session. He asked what was inspiring me/what I was listening to, and apparently, I was listening to St. Vincent, Daywave, Julien Baker, and Billie Eilish. Also, the song “Radio” by Lana del Rey. In said e-mail, I said “shoegazey summer” and referenced “old summer classics coming back to haunt” as well as a boygenius song which tackled self-esteem, lyrically – in retrospect, I feel like we nailed my unplanned prompt of “summer x self-esteem” now that I’m thinking about it!

It was co-written and co-produced with Boyboy. What was the writing and recording process?

I showed up for a day in the studio with my friend Boyboy after I sent said email. We were just catching up, and he told me about a beach day in Malibu he’d just had with his mother who had flown in from out of town. I wrote down the word “Malibu” because it’s a beautiful word and also reminded me of my first trips to Los Angeles. I’ll never forget driving down the Pacific Coast Highway for the first time, feeling like I was on the edge of the world. He showed up incredibly prepared with that beachy chord progression & some of the sounds you hear in the song. I wrote all the lyrics & melodies in about an hour or two, and we chipped away together at the production/arrangement. The original word “Malibu” evolved from a side note from his weekend into something more metaphorical and personal: an attempt to write a comforting, self-affirming song for myself, in which I compare myself to my favorite beach.

“malibu bb” is a single from an upcoming album, Digital Pacific. What can fans expect?

Listeners should expect something extremely conceptual! The album will be a thematic continuation of the singles I’ve been putting out. There are two angles: my life in California and my life in the digital world. It zooms in and out between the two, and at moments, they collide.

Tell us about your new fundraiser with Heal the Bay and why this organization means so much to you.

California means so much to me. Though I was not born here, it has become my home over a period of 10+ years. This place has provided a world of comfort and opportunity for me, and the least I could do is give back. Heal The Bay is a non-profit environmental organization dedicated to making California’s coastal waters and watersheds safe. To fulfill their mission, they use science, education, community action, and advocacy. I volunteered regularly with them between 2008-2012 doing beach clean-ups. I saw the release of this song as a great opportunity to reconnect and also to collaborate with my fanbase community. While I selected a local organization whose work I am familiar with, the environmental crisis affects everyone everywhere (i.e., the smoke from our CA wildfires currently altering temperatures & air quality around the whole country). For my fundraising effort, I collaborated with an artist (Taylor Reynolds) to create an eco-friendly, reusable water bottle with a dual mission: to donate proceeds to Heal The Bay and to take community action to reduce single-use plastic usage.

What can our readers do to get involved?

I’ve got several action steps for you! September is Coastal Clean-Up Month so that readers can participate/organize clean-ups at their local beach, park, or neighborhood (be sure to read up on safety measures + use CleanSwell App to record your findings). You can also host your own fundraiser amongst family and friends – more info on that here. If you’re not an organizing type, you can buy my reusable water bottle, and I’ll do the donating for you! Plus, you get to save the environment every day by cutting down on single-use plastics with your chic new thermos.

Other daily ways to stay eco-friendly: turn off lights not in use, buy local produce, drive less, reuse & recycle, unplug appliances, avoid fast fashion. And let your family/friends know that 97-98% of scientists agree that climate change is real, here to stay, and caused by human activity – it’s our responsibility to take action.