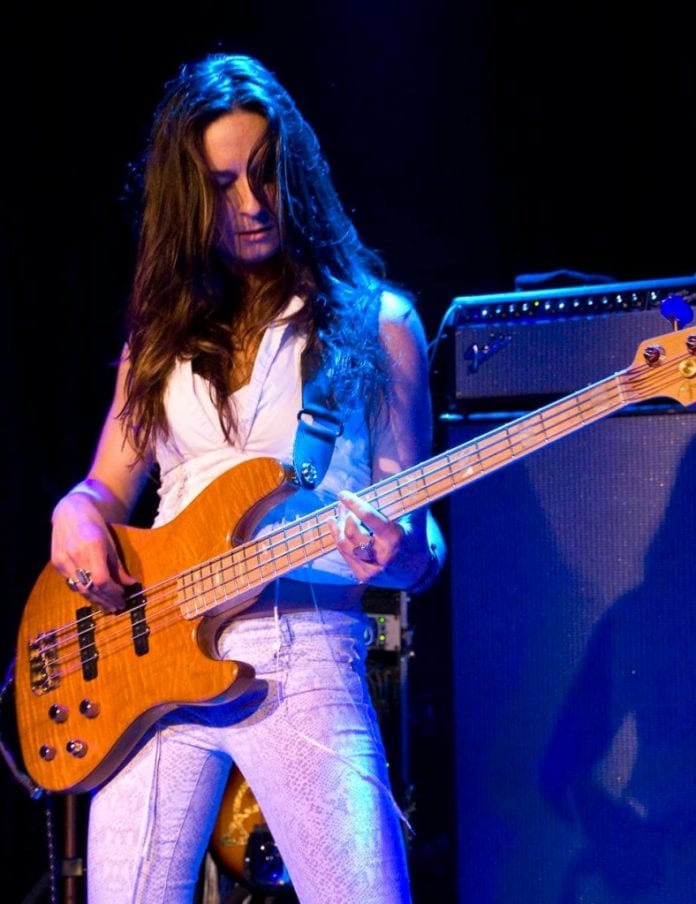 Angeline Saris is a bass virtuoso whose depth of talent is diverse and comprehensive. She began playing the bass at the age of 15 while in high school and continued to hone her skills throughout her high school and college years before taking the plunge to become a professional musician. Not only a seasoned professional bassist, Saris is a songwriter, composer, and music teacher. She has graced the stage with many legendary acts including ska legend Ernest Ranglin, Santana, Dionne Warwick, the Narada Michael Walden Band, and most recently with Orianthi and Richie Sambora (Bon Jovi) at the She Rocks Awards.

Her bass playing styles are diverse and include rock, funk, R&B, jazz, fusion, pop, hip hop and flamenco/speed metal. Beyond her amazing talent as a solo act and the release last fall of her single “Black Strap Molasses,” she has proven herself to be an adept multi-tasker by taking on another performing occupation over the past four years playing in the all-female Zeppelin tribute band, Zepparella, who is currently touring and playing dates all over the country. This is a show that any lover of rock, and specifically Led Zeppelin, does not want to miss.

We were able to catch up with Angeline at the 2015 NAMM Show in Anaheim, took in a performance of Zepparella as the stage band for the She Rocks Awards, saw her performing at the GHS Strings booth, got to know her, and followed up with this interview – and now you can get to know her, too!

GGM:  You’re quite the studied musician. How did you get involved in music and can you tell us a little about your background?

AS:  Thank you!  My first instrument was actually the steel drums when I was in 6th grade. That’s something I’d like to revisit someday — I love the sound of them. After that, I switched to clarinet for a couple years. It wasn’t until my freshman year in high school that I started playing bass. I played in the jazz band all through high school and continued as a hobbyist in jazz, funk and Latin ensembles during my studies at UC Berkeley. Finally, after college, I had an epiphany that made me realize I would not be truly happy unless I pursued a career in music. It was a scary plunge to take, not to mention a huge split from my plans to be a lawyer, but I’ve never regretted the decision.

GGM:  Wow – from lawyer to musician!  How about musical influences…who where they, how did you evolve musically, and is there any one person or act that changed your world?

AS:  If it wasn’t for Mark Peabody, my high school music teacher, I don’t think I would have fallen in love with music the way I did. He was an amazing teacher and mentor, who went on to start Marin School for the Arts. He challenged, inspired and believed in his students in a truly unique way. He was the one who asked me if I wanted to try the bass out instead of clarinet. Because of Mark, high school was a magical time where I was discovering Miles, Jaco, Mingus, Coltrane, Maceo, Kenny Garrett, Wayne Shorter, Herbie and so many more alongside my best friends. Our lunchtimes were spent in the music room jamming and our weekends jamming together or sometimes playing gigs or festivals. I am so thankful for that time in my life.  It made me who I am today.

GGM:  I love stories like that – what a great inspiration!  We recently had the pleasure of seeing you perform at the 2015 NAMM Show at the She Rocks Awards hosted by Laura B. Whitmore of the Women’s International Music Network. Can you share with us that experience and the changes you see ahead for women in music?

AS:  I love how Laura is bringing awareness as well as celebrating women’s contributions in music. It is an interesting time right now for women in music and in life, in general. We are breaking new ground, gaining more respect and challenging stereotypes and norms.  It’s certainly challenging at times, but well worth it.

In music specifically, it is still novel to see a woman playing bass, drums or guitar, for example. While I personally just prefer to be viewed simply as a musician, without regard for gender, there is some truth to the fact that women are relatively new to the scene and still make up a very small percentage of the field. Hopefully, in 10 or 20 years, that won’t be the case. That being said, now is the time to encourage and celebrate, just as WIMN is doing.

GGM:  So, let’s talk about the making of your music video for “Black Strap Molasses.” What possessed you to jump out of a perfectly good airplane?

AS:  Ha!  Well, I was on tour a few years back and I had this idea of jumping out of a plane while playing the Star Spangled Banner for a baseball or football game. When I decided to make my video for Black Strap Molasses, I wanted to run with the idea. The good news is that it is indeed possible! That bad news is that I needed at least five or so jumps under my belt before I could even attempt a practice run with a bass. At that point, I had never even skydived once! Then, there were the details of getting a wireless system in place to broadcast the bass to the ground, which took more time and money than I had at that moment. So, I decided to simplify the plan for what I could handle at the time and just jump from the plane sans bass.

GGM:  Well, you did a fantastic job – something I would never do!  What was the inspiration behind that song and the music video?

AS:  Black Strap Molasses is a thick, raw, unrefined sweetener with an unapologetically unique taste that’s not for everyone. I liked the idea of those characteristics in a person— someone who is saturated in their own character, who isn’t afraid to be raw, who isn’t hiding their true nature for fear that someone might not like it. In this song and video, Black Strap Molasses represents a magical elixir that rids you of your fears. Skydiving tied into that nicely! With the Mexican Wrestling masks, I just liked the visual of a room full of people dancing with them on. I also thought it would be pretty rad to skydive with one on, which is what we did.

GGM:  Besides your solo work, you’re the bassist in the all-girl Zeppelin tribute band called Zepparella.  What brought the band together and how did the band decide upon Zepparella?

AS:  Zepparella has actually been together for about nine years. I’ve only been a member for the last four years. When their old bass player left the band, Gretchen Menn reached out to me and asked me if I would be interested in joining. The rest is history!

I believe Clementine, the drummer, came up with the name Zepparalla. At the time, she was really into the movie Barbarella and merged the two names together to form the band name.

GGM:  Besides Zepparella, you’ve also worked with the Narada Michael Walden Band, Ernest Ranglin, and the Gretchen Menn Band. Let us know more about those projects.

AS:  Yes, I work as a full-time freelance musician in a variety of projects. I joined forces with Narada Michael Walden right after he got off tour with Jeff Beck and Rhonda Smith. He was really inspired by his time out with Jeff and wanted to do a project of his own. We recorded two alums, Thunder (swampy rock/funk) and Rising Sun (fusion) and then immediately went to Japan for two weeks to tour the albums. Playing with Narada is like nothing else. I don’t know if there are words to describe the power, finesse and pure energy he puts into the music. Plus, he is a warm and wonderful person who is a total inspiration to be around. I can’t say enough about getting to play with him over the last three years. A huge learning experience, to say the least.

Playing with Ernest Ranglin over the last two years has also been another wonderful musical blessing in my life. Ernie blends jazz, reggae and ska with insane guitar chops in a way that is uniquely his own. Plus, he’s one of the most kind and enjoyable souls to be around. He tells the best (and the worst!) jokes, yet somehow they are all funny coming from him. I believe we will be back doing some festivals this summer… I can’t wait to get back on the stage and lay down some heavy grooves with him!

Gretchen Menn is an amazing musician as well as a dear friend. What I admire about her most though is her skill as a composer. Gretchen has a true vision and an extremely unique voice. Her first album Hale Souls is a testament to this. While Stu Hamm played bass on most of the album, she invited me to come play on Scrapmetal, the first cut. She is currently working on her second album right now, so hopefully, we’ll be out playing some shows for that in 2016!

GGM:  You’re endorsed by several different companies. Can you give us a rundown of your gear?

EMG’s in the Sadowsky NYC

GGM:  Besides all you’re performing, you take the time to also teach young students. What’s the best piece of advice you would give aspiring musicians out there?

AS:  Well, there are a lot of things that go into being a professional musician.  Here are a few that I try to keep in mind for myself:

Commit to a regular practice routine everyday.  Check out my blog for a good example of that:  http://angelinesaris.com/blog/108-days-of-practice/

Have a good attitude.

Be kind to others.

Show up on time.

Prepare as much as you can.

Be a good human– I believe it makes it you sound better.

GGM:  What’s next for Angeline Saris?

AS:  I wish I knew!  Everyday is an adventure!  Seriously… I would like to tour more in the coming years. Then, in the off time at home, I would like to continue to write and record more of my original music. I’d also like to have more time to practice myself and continue to grow as a musician and as a person. I’d also like to become more proficient on other instruments, like keys, drums, mandolin, guitar and ukelele. So much to do, so little time!!

For more on Angeline Saris, visit her site HERE. 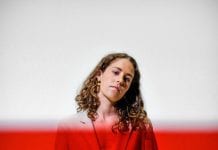 Interview: Michaela Slinger Chats About Her Water Bottle, Guitars, and the Joy of Letting Go