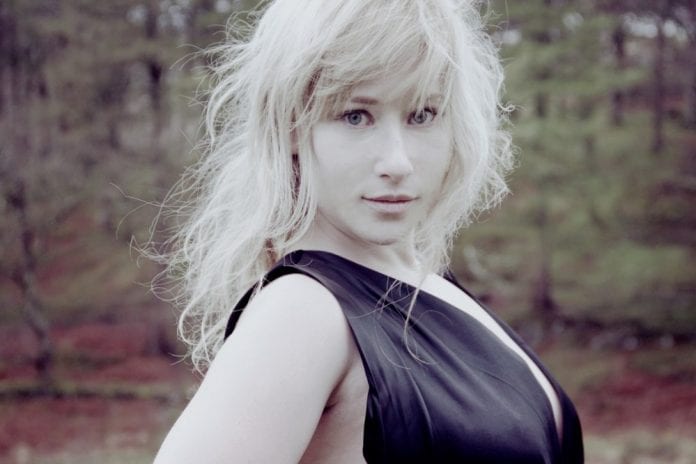 New York based singer-songwriter and guitarist Anna Rose came from a musical family – her mother a ballet dancer and her father an Oscar-winning Disney composer, and it was that musical upbringing and her love at first touch with a guitar that led her to her musical journey.

Anna Rose released her sophomore album Behold A Pale Horse last summer with producer Kevin Salem (Rachel Yamagata, Lenka) which has been described as” full of ’70s-inspired rock and roll tunes that run from straight ahead blues rockers to haunting piano ballads.”

Anna Rose covered the Stooges “Gimme Danger” after performing it back in 2010 for the “Jam for Ron Asheton” tribute. The song stuck with her and she began reworking the arrangement and recently released the recording which can be heard HERE.

We had a chance to learn more about Anna Rose, her musical background, influences, and her guitars!

GGM:  You come from quite a talented family -your father, Alan Menken, is an Oscar-winning Disney composer and your mother, Janis, is a ballet dancer; so naturally music was a part of your life from the beginning.  What was the first instrument you played and how old were you?

Anna Rose:  I know I was taking piano lessons from a very early age, maybe 2 or so, but I think the voice is absolutely an instrument and I’ve been using that since I could open my mouth, so I guess that came first! Then I picked up the guitar at about 5 and that was it for me…I fell in love.

GGM:  What made you decide to pick up the guitar?

Anna Rose:  I don’t really know, it was something other than piano, which I was used to seeing, but I was also beginning to understand that it was guitar I was hearing in my favorite songs…but who the hell really knows, I was so young I can’t really remember much!

GGM:  In what ways did your family encourage you to pursue your interest in becoming a professional musician?

Anna Rose:  Well, they allowed me to drop out of college…that was a pretty big one. They come to a lot of my shows. When I was a kid they drove me to my guitar lessons, band practices, etc. They knew it was my dream and I was going to do it with or without them, so I think it’s pretty cool that they’re along for the ride.

GGM:  What are some of your fondest musical memories growing up in your household?

Anna Rose:  Too many to count, but for me knowing Alice Cooper was upstairs in the studio working with my dad was a big one. Getting to meet Roger Daltrey after seeing The Who live at Jones Beach. Those moments are etched in my mind, but I really treasure the moments I’ve created through my own work. Opening for Jackson Browne and getting to tell him how much I adore his music, singing with The Stooges, seeing my music video on NME…I was always taught the value of hard work, so the moments I’ve created for myself are the most precious.

GGM:  Coming from a family background so engrained in Disney music, how did you transition to more of a rock sound?

Anna Rose:  Honestly, I will always love and respect the house that the Mouse built, but I was exposed to all different kinds of music growing up, not just musicals. I was raised on Rock ‘n’ Roll, Blues, Folk, Grunge…that’s my background.

GGM:  Do you have any favorite female musicians that have inspired you?

GGM:  Where are your musical inspirations drawn from?

Anna Rose:  All over the place. I try to stay open and not be afraid to feel something or try something new. I’m definitely an artist within the house of rock ‘n’ roll, but inspiration is everywhere.

GGM:  Let’s talk about your new sophomore album Behold a Pale Horse.  How did you choose Kevin Salem as the producer and what was the writing and recording process for this album?

Anna Rose:  Kevin and I immediately clicked. He loves rock as much as I do. He understood the direction I wanted this album to go and where I’m heading as an artist. We also co-wrote several songs together and they were killer, which sealed the deal.

GGM:  You toured the latter part of 2013 in support of the album; how was the tour?

Anna Rose:  All of the touring throughout 2013 was incredible. Honestly, I’m anxious to get back out on the road and play some more shows! Crystal Bowersox, Howie Day and Tyler Hilton have all been awesome. It’s really an honor to get to play shows with such talented performers and writers.

GGM:  Do you feel your music has changed since your debut album Nomad and, if so, in what way?

Anna Rose:  I think I have developed further into the artist that I am meant to be, so yes, the music has inevitably changed. The overall sound of this album is a heavier rock sound, though I don’t think that’s what defines me. The lyrics are darker, but again I can’t say that’s the reason Pale Horse is a departure from Nomad. It’s a number of things and I’m sure they will all continue changing over time because ultimately that’s my goal. I never want to feel that I made the same album twice. I owe it to myself and to the listener to constantly push myself forward as a writer and a musician.

GGM:  The official music video to “Beautiful World” from Behind a Pale Horse was recently released in July.  The video was filmed in the canals of Camden, London.  Can you share with us how you chose that location, the experience making the video, and what guitar you played in the video?

Anna Rose:  It really was the director of the video, Jennifer Tzar, who came up with the idea to film in Camden. We knew we would be in London somewhere, but Camden seemed perfect because it felt like the East Village (in my hometown of NYC) with all of its attitude and rock history. Besides the choice to use Camden, it was pretty spontaneous, though. The song is about finding beauty in the things that are often overlooked or unseen, so it was important to be in the moment and find these things as they came to us. As for the guitar in the video, it is my very well-loved Telecaster that I play at almost all of my shows.

GGM:  Speaking of guitars, can you share with us a little about your gear?

Anna Rose:  Well…at the moment my setup is fairly simple. For playing with my full band, I use my Tele and a small pedal board with my three necessities – Fulltone Supa-Trem, Fulltone OCD and MXR Dyna Comp. For any acoustic performances, I play my Taylor K14C or a Gibson L-Series Keb Mo Bluesmaster. I have a few other guitars…but that’s a story for another day.

GGM:  With all of your knowledge and background in the musical industry, what advice would you have for young, aspiring female guitarists?

Anna Rose:  Work hard and remember you have the power to make anything possible. Oh…and don’t take any sh*t from the dudes.

GGM:  So what’s next for Anna Rose?

For more on Anna Rose, visit her site HERE.