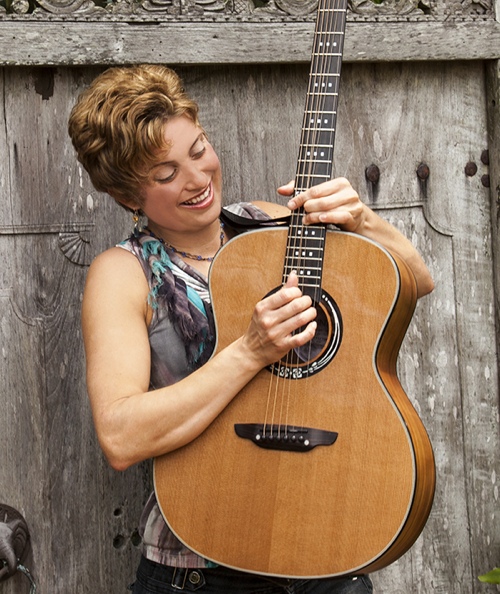 On a warm, spring evening, I paid a visit to a pub in downtown St. Petersburg, Florida, which had a courtyard right in front of it. It was there that I got to enjoy a live set by Christie Lenée, a female singer and guitarist who’s probably one of the more creative in terms of how she plays the guitar.

The online publication Skope described Tampa native Christie Lenée as “a refreshing burst of unrestrained love and feeling . . . It’s simply a joy to listen to her spirit break free.” Part of her free-spiritedness comes from how she plays acoustic guitar, at least beyond the usual picking and strumming. She’s done her own beats on the guitar’s body, and she has also enhanced its sound just by tapping the strings on the fretboard. When I asked her following her set how she came up with this style of acoustic fingering, she described it as something she figured out of a certain necessity.

“I was writing for choral music and strings at the time,” Christie said, ”and I was trying to figure out a way to play multiple parts at the same time, so I started doing the tapping style. Kind of like a piano.”

An alumna of Tampa’s Blake High School and its performing arts magnet, where she specialized in acting and classical guitar, as well as of the University of South Florida, where she studied classical and jazz guitar, as well as music composition, Christie, who’s been living in the Philadelphia area following prior residences in Portland, Oregon, and Taiwan, happened to be back home for not just live gigs like this, but also to finish up on various other projects, including a forthcoming album.

Besides Philly being within an hour’s drive or two from New York City, Christie describes it as “a big city with a small-town feel.” But while it can get snowy up in Philly during the winter just as sure as it gets hot, sticky and stormy during the summer in Tampa, Christie told me that she likes how the seasons change up there.

Christie first sang live at the age of five as part of Tampa’s famed youth show choir/ensemble Entertainment Revue. She first began playing guitar at age thirteen, then got her first guitar-playing professional gig while still in high school. “I played classical guitar for weddings and private parties,” she said, and ”then gradually worked into playing my original music for a living.”

Though the first rock concert she ever attended was an Alanis Morissette show back when she was in sixth grade [Christie: “Jagged Little Pill was the first album I ever owned, and is still one of my favorite records of all time.”], Christie counts classic rockers Pink Floyd and Jimi Hendrix; the late New Age acoustic guitarist Michael Hedges, acoustic duo Indigo Girls, jam-band master Dave Matthews and indie legend Ani DiFranco among the artists who influenced her the most.

Ani, of course, is synonymous with the phrase “indie legend,” not just as a singer and songwriter, but one who has released every album she has recorded on her own label. So I asked Christie whether she thinks releasing her own recordings independently is more advantageous than doing so through a major label.

“I think there’s advantages to both really,” Christie said, “and I commend Ani DiFranco for what she’s done to represent what you can do on your own. I’m open to signing with a major label before doing my own; it just depends on what comes first. Right now, I’m just putting stuff out. I did just get a distribution deal through Blingnot Media, which should certainly be helpful in reaching a wider audience.”

Back in the first decade of this century, while she was living in Taiwan, Christie helped form a band called Orenda, which, she explained, was a Native American word that meant “passion and desire of song.” After that, when she came back to Tampa, Christie’s next band was FunkGrass Groove, in which she played a more funk-oriented electric guitar, before dedicating herself to the solo acoustic guitar work that she’s become more recently known for.

Everything Christie has learned from her lessons and studies translated well into the performance I saw. She combines those classical and jazz styles with her aforementioned fretboard tapping to deliver rich instrumental textures. You can find those in her most recent album, Chasing Infinity, which is an all-instrumental album, and, as she told me, the kind of album she has always wanted to record for showcasing her guitar skills.

“It took a long time to write all that music and practice it to be recording-ready,” Christie said, “Likewise, it was an enormous reward to finish the project!”

A couple of times during Christie’s set, when she performed her original instrumental tune “Raining a Miracle” on her 12-string guitar, followed by her rendition of the Beatles’ classic “Let it Be” on the 6-string, she incorporated a rather unique instrument that she discovered last year, called the Engle. It’s been described as a “drumstick for guitar” and I asked Christie if she ever thought back then that the Engle’s inventor, Mark Engler, would have selected her to be one of its pioneer endorsers.

“No, it was a complete surprise,” Christie said. “I was at a venue in Philadelphia, and he just came up to me and said he invented an incredible product that he thought I’d do something amazing with…knowing how much I love to drum and beat on the guitar, I said, ‘Drumstick for guitar? I’m sold; where do I get one?’ Progressions with this revolutionary tool have taken off from there.”

“I recorded four compositions on the Chasing Infinity album featuring The Engle, then the next thing I knew Engler Innovations asked me to record the instructional videos of how to use the product. These videos are now accessible to anyone who purchases a signature model of the product. It was a pleasant surprise to see this quickly go international!”

In addition to her musical endeavors, Christie has also helped raise money for such causes as relief for victims of Hurricane Sandy back in 2012, as well as the organization TERI, Inc., which benefits autistic and intellectually-disabled persons [ www.teriinc.org ].

Christie Lenée is expected to have a new album out later this year, but in the meantime, you can find Chasing Infinity, as well as her prior albums, on CDBaby as well as her website, www.christielenee.com.  You can also follow Christie on Facebook, Reverbnation and Twitter, just by looking up “christielenee.” Also, you can see some videos of her on www.youtube.com/christieleneemusic.

And to find out more about the Engle, simply visit www.theengle.com.