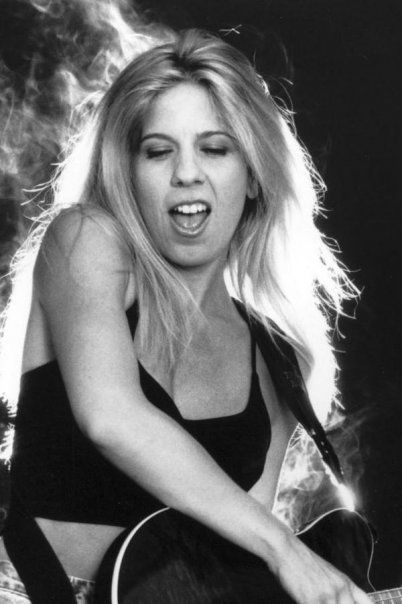 Guitarist Terri McCoy is a Portland, OR native who’s made her mark on the Los Angeles scene. A Musicians Institute Graduate, Terri has played in bands tearing up the sunset strip and has toured worldwide. She’s also a session player for Hollywood’s Local 47, worked on T.V. shows and films. Playing guitar since she was eight years old, her playing has been compared to Jimi Page and EVH. Guitar Girl Magazine caught up with the “Guitar Girl” to talk about her inspirations, magical moments and the music coming from her.

GGM:  You have a lot going on. What do you tell people when they ask what you do in music?

TM:  I do a variety of things in music. I have a pretty broad range of experience. Today I am currently working on my first solo EP and very excited about it. I mostly see myself as a songwriter and guitarist…but, I do play most instruments, dig deep in the recording process, love live performance and enjoy teaching.

GGM:  As a guitar teacher, what are the fun things you do with your students?

TM:  For the last 10 years most of my students are under seven. I spent many years doing private lesson to all ages but after working for the LAUSD KYDS program in Los Angeles and studying music therapy, I found my true passion is using music to help kids learn, heal, create and grow. We do all kinds of activities from learning to count out beats in drum circles to painting notes in different colors to express emotion, something Steve Vai taught me when I was at GIT in 1985. When you’re teaching little kids….it’s all fun.

GGM:  Now what about your music background and influences?

TM:  My musical background started when I was seven in the Deep South, I played little shows, took lessons and never put it down. I got my first electric at 13 and was in Hollywood at GIT four years later. There is a nice page in Pat Hicks’, the founder of GIT, book “Trading Fours” about my trip to LA. From there it’s just been one project after another – from Sunset strip in the ‘80s, Europe in the ‘90s, a nice continuing run doing soundtrack work for ASCAP and local 47 in Hollywood, and now my first EP.

My first real influence was Paul Williams. I bought “Here Comes Inspiration” when I was just a kid with my first saved-up allowance money. He is still a very moving force in my life today….it was the songs. I LOVE songwriters. I have older brothers so I was exposed to all the late ‘60s and ‘70s rock pretty early. That’s where I picked up an ear for electric guitar. I have so many musicians that have inspired me….all the greats from classical music to what’s current today. I listen to everything and have an appreciation for it all.

GGM:  And how did you come to be known as “Guitar Girl”?

TM:  People just started calling me that. I do love comic books and always would say…I’m a realtor by day and wear a guitar cape after eight! I love superheroes. I’m “Guitar Girl.”

GGM:  Who or what truly inspires you?

TM:  Children inspire me because I truly believe they are the future as they can and will change the world.

GGM:  Can you tell about what have been some ‘magical moment’ achievements you’ve had?

TM:  Oh wow, I have had so many that I could write a book! When I look back, it was pretty magical being in Hollywood in the ‘80s and going to the old GIT – that was magical. Almost every little goal I set, once I achieve it, it feels magical. I have met and played and hung out with some legends. The moment I reached that point of forgetting everything I ever learned and it just flowed, that was a big magical moment. And I think the moment I starting using my music to help others was the most magical achievement so far; paying it forward.

GGM:  As a girl guitar player, what are some of the challenges you’ve had to face?

TM:  Well, when I went to GIT there were only four women and 800 guys, so it definitely was a challenge. I never tried to sell myself with girl appeal. Anyone that knows me knows I won’t sell out on that. But it’s been a huge challenge, fought people on it my whole career.

TM:  Advantages, I never really gave myself any.

TM:  I want to get in and record my EP then I would like to record more once that is out. I have a few well known producers that have offered to work with me. I also will be doing some more recording down in LA with a few different songwriters I am collaborating with for some film scores. I am working at a school here in Portland teaching kids and love combing my knowledge of music therapy and instruments to help the ones that need it the most. I am also open to any other gigs that may come about as I love touring.·

GGM:  Any parting words of wisdom to girl guitar players?

TM:  Perseverance IS the key! (and that was told to me by the great Joe Diorio). Be real, don’t give up and be true to yourself.

For the latest info on Terri, check out her Facebook page https://www.facebook.com/guitargirl