Home Interviews Interview with Cori Elliott of The Vim Dicta; chats about her band,... 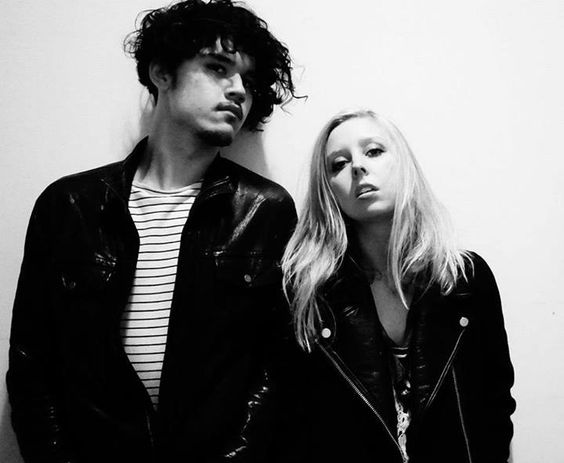 Young, vibrant and full of musical knowledge for her ripe age of 21, Cori Elliott of The Vim Dicta’s love of music traces back to her childhood and youth, growing up listening to musicians like Jeff Buckley, Sam Cooke, and Billie Holiday, among others. I commented to her that she’s an old soul; she humbly laughed, and I think she agreed. When listening to her smoldering voice and high-octave range, you can definitely tell influences of Buckley and even more versatile as The Mars Volta.

Cori started out with her band only two years ago in her garage, after meeting Matt through mutual friends, and obviously meshed well, so they decided to start a band. Recently acquiring a new drummer, the band just released their new single, “Point Blank,” out on June 25, with engineering by Shelly Yakus (John Lennon, Tom Petty) and Niko Bolas (Neil Young, Fiona Apple). In the short time they’ve started, The Vim Dicta’s talent is soaring to new heights with each move, musically and lyrically, they make. In-between LA and New York, we chatted with Cori about her background in music, influences, the writing and recording process with her band, and several of her favorites. Check it out:

GGM: What’s your background in music and who are your influences?

Cori: I started playing guitar around 13. I got my first guitar when I was 10, and I was really young, and it was hard for me to get into it. I started playing guitar because there was this boy I was hanging out with and he mentioned that he was going to learn guitar and so I decided I wanted to try it. So, it was a competitive thing at first. Then, a couple of years later, I was listening to a lot more music, and I really got into Bob Dylan. He was the reason I started writing music, because I was writing poems and other little ditties on my own. So, I started putting it together with some chords and progression, with licks and stuff. That’s kind of how I started with my background. I don’t know, it was kind of like a hobby until I moved to LA from Austin, going into my freshman year of high school.

My influences are all over the place; Led Zeppelin, Janis Joplin, The Beatles, Jeff Buckley, Patti Smith. I love Talking Heads and The Smiths. My roots are in the 60s and 70s. I also listen to a lot of Sam Cooke, Billie Holiday just kills me, and Nina Simone.

Cori and I bonded over our mutual affection for Jeff Buckley, and Cori mentioned that “his vocals are other-worldly.” I just got into Jeff recently and my vocals are more influenced by him now.

GGM: What is the recording and writing process like for The Vim Dicta?

Cori: Well, it started off with me and Matt in his garage. He has a digital 8-track and I would come to him with licks. We mostly write riff-based stuff, because of our set-up. I play guitar and bass at the same time to different songs. It starts off with the music most of the time, and I’ll have lyrics that I’ll have either written beforehand or…actually, most of the time we’re playing and then I’ll sing a melody and hum it out until it feels right. Then, the words will start to form themselves. I don’t really pre-think it too much. It comes out and halfway through the written song, I know what this is about. I know where I’m at right now in my life or whatever. It’s really sub-conscious. We write a lot at night, like when we’re jamming or something; a song will come out of that. But, it’s really give and take between me and Matt. Our styles are different, but together it forms this thing that I can’t really explain in words, and it’s very fluid. The drummer adds his flavor, which is a lot. The sound wouldn’t be as good without the drumming we have.

GGM: Did singing or playing guitar come first for you?

Cori: Guitar came first. I didn’t really know I could sing until I was like 16, maybe 17. I always sang in school choirs and school plays that we had to do, but when I started writing stuff on my own in my room, I was really shy about it and didn’t want anyone to know I was playing. My friend encouraged me to do open mics, and it took a lot of guts for me to do that. Even now, when I think about it, it’s really scary to do an open mic. My voice has definitely grown since I’ve started with the band. I feel like I’m still discovering it and it’s becoming something where I need to control it, but at the same time to let it go.

GGM: What would be your dream gig or line-up?

Cori: Hmmm…there are actually a couple. Headlining a really cool festival would be cool, like at Coachella or something. Or even like…there’s a venue in LA, called The Wiltern; I really love that place. I love the sound and the look of it; it kind of has this gothic and old-school theatre where you would see operas. Probably playing with Jack White, maybe just him, or The White Stripes or The Dead Weather. Wait, are they dead or alive?

Cori: Well then if I say Zeppelin, it will be hard to follow that or say anyone after that. Probably them and my influences, like Jeff Buckley. I would want to see all of them live in the same night, and then play with them.

GGM: Do you guys have any plans for a full-length album?

Cori: Probably, but it won’t come out until later this year or early next year. We just now got a new drummer (during their time in New York). We’ve been in New York since May 1st (they left on Sunday, June 30 to head back to LA), to play, meeting people, and getting certain opportunities, stuff like that. Something unfortunate happened with our last drummer that we had for two years, and we had all these gigs lined up when we got to New York, so that was really crazy, because we had to figure out how to find someone in this certain amount of time. We were auditioning 8 people, and some of them were really good, but they just didn’t have the right style. So, then our manager Dan and I decided to put up an ad on Craigslist (for a drummer), and the only person to respond was this guy named Chris and he was a session drummer for three years in New York. He was looking for a band because he was tired of the lifestyle of not knowing who he’d be playing with and stuff, so we got together and played. The chemistry was there and we immediately thought, “This guy’s awesome.” I feel like we’ve grown in a way too with him because he’s so experienced, and our game has been stepped up a bit. So, we had to record with him, and we have a bunch of recordings that we have to re-record. So, when we do that, we’ll probably pick out a date to release the album. We’re writing some new songs too.

GGM: What was your first album on CD, cassette and/or vinyl?

Cori: I actually never really had cassettes or purchased any of them. I did start collecting vinyl like three years ago. My next door neighbor at the time had a box full of them, and he was like “Pick and take what you want, I’m getting rid of them,” so I was like “Woo!” and went over there and found Sgt. Pepper and the White album, Zeppelin I & II, Bob Marley, and a bunch of really good stuff that he was going to get rid of. I totally scored for my first couple of vinyls.

GGM: Who was your first concert and do you have a favorite one you attended?

Cori: Oh my gosh, I think my first concert was Switchfoot. I mean, it was like my Mom took me and I was super young. It was in Texas, so there weren’t too many concerts going on, and I wasn’t into music like I am now, at that point. It was like a Christian-like concert. It’s just what I remember.

Favorite concert? Let’s see….I think the one that’s standing out in my mind, was at ACL (Austin City Limits) last year (2012), and it was Jack White, hands down. He was just  like, he has this intensity and spontaneity about his performing. I just love that because it’s so exciting and he was playing some White Stripes stuff, some Dead Weather, some Raconteurs, and some of his more recent stuff that he just put out. You know he has an all-girl and an all-guy band? I saw him with the all-girl band, and they were so good; it was really, really cool and electrifying, you know! I saw some really cool bands at ACL; I saw Iggy Pop and the Three Stooges; it was so weird, and he was on the ground, shaking his head with water all over his face, running all over the stage and yelling profanities at the audience (laughs). It was so intense, but it was cool to see those guys, because I don’t know when I would ever see them again.

GGM: What are five albums and bands you wouldn’t want to live without?

I know these are all cliches, but they’re all masters, and there’s a reason why they’re so renowned.

GGM: Do you have a guilty musical or TV pleasure?

Cori: Hmmm…Hmmm…I know I do, but let me think for a second.

I’ve heard some really good songs by Alicia Keys who I probably wouldn’t announce that I listen to her too much. It’s like none of her popular stuff, it’s kind of like the B-sides to her albums, but she can write some really good stuff. With her recent album she has, my friend has it, and we’ll listen to the whole thing. It’s not over-produced, or too polished, which is cool, and there are a couple of them that are raw, and I like that.

GGM: Is there any music that makes you cringe?

Cori: Probably most all of the mainstream stuff. It feels fake to me and makes me feel uncomfortable.

Cori: Yeah, me too! I want to shout-out to Janet Robin who was my guitar teacher and I just saw her on Guitar Girl Magazine. Thank you so much!

Connect with Cori and her band, The Vim Dicta: