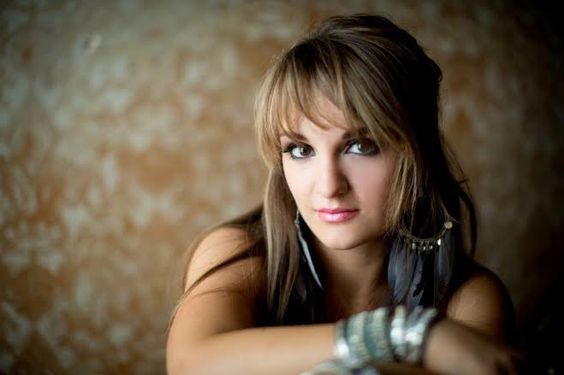 She has just debuted her self-titled album featuring her single “Touch the Stars,” that was released in February, in advance of the album’s release. Rachele has been writing songs since the age of 12 and her influnces are a broad range of artists. Rachele currently plays a Breedlove acoustic guitar.

We chatted with Rachele about her new album, her collaborations with Jamie O’Neal, her background with music, and much more. Find out about this on-the-rise, young talent and watch her go places, and catch her on tour near you:

GGM: Were you exposed to the genre (country) as a young child, the culture in Alaska, or is it a familial root?

Rachele: You know, honestly, I was exposed to country music through my family more than through living in Kodiak. The community was such that there wasn’t a ton of country music fans, and those who were fans were hardcore country fans. We were always trying to convert everyone else into being a country music lover (laughs). I really just grew up with it especially through my Dad; he would play guitar, sing country, and gospel country songs after meals. When we were in his truck, we’d listen to country radio or tapes. It was really more through my family.

GGM: Your collaboration with Jamie O’Neal is really interesting, and I wonder if there are any other country music veterans that you might want to collaborate with in the future?

Rachele: I mean, yeah (laughs). There are so many talented, current musicians, and others that are showing the ropes. that I’d like to collaborate with. The interesting thing about Jamie is that she was the first artist that I was a fan of as an artist and a songwriter. She’s an obvious choice and I’ve been really blessed to work with her. The ultimate dream for me, is heck, just to open up for, is Garth Brooks or to tour with him in any way, would just be unreal. Talking about people who have been a huge inspiration to me.

GGM: This is your debut album. What was the production and/or recording process like?

Rachele: This is the first full album of country music which has always been my heart, and definitely the first thing we’ve put out on this scale. This production was interesting because, honestly, it took forever (laughs). When we first started recording, we we weren’t really aiming to make an album, we were recording for the purpose of having a demo album. So, the songs have come together over such a large span of time. The cool thing is; there were some tracks that got kicked off the album (which I absolutely loved) and they just ended up being probably on another album. It’s not that they weren’t good enough, it’s just that the songs that we chose were the best ones. What ended up happening with all these songs, and changes happening on up until January, these songs ended up being songs that were all inspired by my life. The songs that didn’t make the album were songs that were inspired by my friends, or were stories that I made up with my co-writers. The songs that ended up the album were ALL songs that were inspired by my life, which is cool and worth the wait.

GGM: What is your favorite musical instrument to play?

GGM: Is there a second runner-up that you like to play or that you’d like to learn to play?

Rachele: Well, I play piano and I enjoy that. I don’t play it as much, and would love to play more. I was just telling my sister that I don’t play enough and I’m getting really rusty on the keys. As far as instruments that I always kind of wished that I’d play? I always thought it would have been really fun to learn the fiddle. I think it’s just a fun instrument. I probably won’t ever learn it, but if I could just pick one that I’d wished I learned to play when I was young, and addition to what I play now, I’d say the fiddle. It still wouldn’t beat out the guitar, though.

Thank you for the interview, Rachele, and I wish you much success in your endeavors and career!

Check out Rachele’s social media links and join in on her musical journey.