Home Interviews Interview with Jane Getter; her band, music, inspirations and being a role... 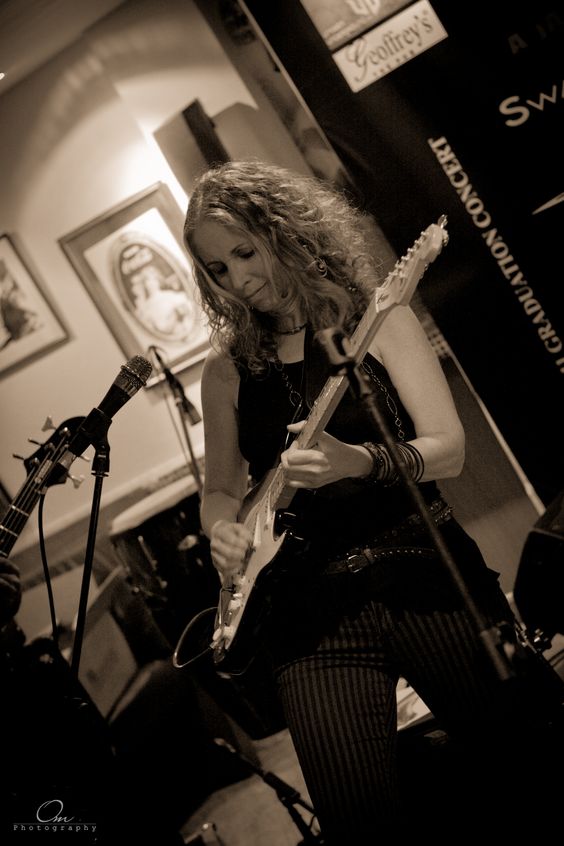 Jane Getter has been referred to as the “first lady of fusion rock” and Guitar Player Magazine said she is “the fieriest fretboarding female ever to strap on a Stratocaster.” Getter has performed in the Saturday Night Live Band, with Jaimoe from The Allman Brothers Band, toured with electric jazz masters Ursula Dudziak, Jack McDuff, Lenny White, Michael Urbaniak, and others. ASCAP recognized her with the Gershwin Award for Music for Theater or Dance in the mid 90’s. Getter’s albums include Jane on Lipstick Records, See Jane Run and three both on Alternity Records.

We had a chance to catch up with Jane and learn more about her current band, her music and her gear.

GGM:  Can you tell us a little about your current band line-up?

Getter:  My latest album “three” has keyboard player (and husband) Adam Holzman who currently is the keyboardist in the The Steven WIlson Band (from Porcupine Tree). He also was the musical director and keyboardist for Miles Davis in the ’80s. Bassist James Genus is the bass player in the Saturday Night Live Band and Anton Fig is the drummer in the CBS David Letterman Orchestra. Also, special guest vocalist Jimmy Gnecco joined us on a track. Lately, we’ve done some West Coast dates, and I’m also honored to play with drummer Chad Wackerman,  who played with Frank Zappa for many years, and with one of my guitar heros Allan Holdsworth.  Bassist Doug Hodges and vocalist Tyra Julliete also joined us.

GGM:  I read where you started out taking piano lessons as a child but wanted to switch to guitar after seeing your sister play? What made you want to make the switch and how old were you at the time?

Getter:  I don’t remember when the switch happened, but I started playing when I was around 10. I think I was always drawn to the guitar. I was taking piano lessons and my sister was taking guitar, but I used to spy on her lessons. I think my parents finally got the hint and let me switch to guitar. My sister only played for about a year or so.

GGM:  I suppose your parents were pretty supportive in promoting music education. Did they play any musical instruments?

Getter:  They were supportive in all of the arts although they weren’t musicians or artists themselves. My mother’s very close sister was a painter and  some cousins of mine are artists. I’m the only professional musician in my family. I took a lot of art classes when I was growing up, along with music. My parents always thought the arts were important.

GGM:  When was it that you decided that you wanted to pursue music as a career?

Getter:  In my first year of college I was a music and dance major. In my second year, I reached a point where I had to decide which one I wanted to pursue, and I chose music.

GGM:  Who were your early musical influences and how have they impacted your musical style today?

Getter:  I have an eclectic style and love many different kinds of music. They have all influenced my playing and writing  These are some of my early influences – Crosby Stills and Nash, Led Zeppelin, Allman Brothers, Bonnie Rait, Jimi Hendrix, Sly and the Family Stone, and so many more. Then I got turned on to jazz, first through fusion – Return To Forever, Mahavishnu Orchestra, and then straight ahead jazz  – Wes Montgomery, Miles Davis, John Coltrane,etc. I’ve always been into funk and got into world music around the time I was exposed to jazz. More recently I’ve been into classic and current prog rock bands like King Crimson, Porcupine Tree and Steven Wilson. I also like Periphery and Animals As Leaders.

GGM:  Guitar Player Magazine described you as the “fieriest fret boarding female to ever strap on a Stratocaster.” Can you tell us about your Stratocaster and your gear, and what was it that drew you to the Stratocaster?

Getter:  The Stratocaster is fairly versatile and since I play different kinds of music I wanted something that could rock out but still have a nice clean sound. My Strat. was made for me in the custom shop fashioned after the 1960’s Strat. I have since customized it more with a different bridge and tuning pegs, but have kept the pick ups. My main amp is a Mesa Boogie Mark IV, and I also use a Fender Deluxe for smaller gigs. I have a FIX pedalboard with an MXR Dynacomp, Maxon Overdrive, Seymour Duncan Lava Box, Boss Super Overdrive, TC Electronic Chorus, JAM Delay Lama, Boss Digital Delay, Rocktron Digital Delay, Vox wah wah, and an Ernie Ball volume pedal.

GGM:  Besides your Stratocaster, do you have any other guitars?

Getter:  I have four electric guitars and three acoustic guitars that I love. I am now endorsing a small guitar company out of NYC called Peekamoose Custom Guitars. I love this guitar and have been playing it more than any of my other ones lately. It’s like a combination of a Strat and a Les Paul, without the weight of a Les Paul. I also have a 1971 Fender Telecaster, 1953 Gibson ES175, 1973 Martin D28, Ovation nylon string circa 1980, and a Fender nylon string.

GGM:  Your last album “three” was released late 2012. Have you been writing and recording any new material since that release?  If so, what can your fans expect to hear?

Getter:  Yes – I’m happy to say that I think I have all the material for my next album now. All of the songs are still in the demo stage and I hope to record sometime this year. The material on this new album is more prog rock than anything else, but my jazz/rock fusion roots are still there.

GGM:  Fender has been instrumental in encouraging and supporting young girls to play guitar through their Girl Rock Nation program. How do you feel about programs like this, as well as other programs like the Girls Rock Camp Alliance, in the movement to empower young girls?

Getter:  I think those programs are great! I wish they existed when I was growing up. It’s important to give young girls an inspiring and supportive environment where they’re encouraged to step out of their comfort zone without being intimidated by “the boys club.” The “boys club” exists even in the professional world and the more confident and advanced the girl guitar player (or any instrument), the less likely she’ll be effected by it and other hurdles.

GGM:  With this movement towards encouraging young girls to play an instrument, do you feel you are a role model?

Getter:  I think I am. The fact that I’m still here doing it and have had some amazing opportunities hopefully will encourage young players to stick with it. I also hope that I’m a role model musically.

GGM:  What is the best piece of advice you would share with anyone wanting to pursue music as a career?

Getter:  Go into music as a career only if you can handle the ups and downs and  the sometimes financial insecurities. If music is something that you could not “not do” and your passion is strong, then you’re probably cut out for it. It can sometimes be a rough road, but the rewards are incredible.

“The Raven that Refused To SIng” – Steven Wilson

“Knocks Me Off My Feet” – Stevie Wonder

I cannot live without:  my famiy!

My dream performance would be with:  Jeff Beck as the 2nd guitar player

For more on Jane Getter, visit her site HERE.