Home Interviews Interview with Kristen May of Flyleaf on Hottest Chicks in Hard Rock... 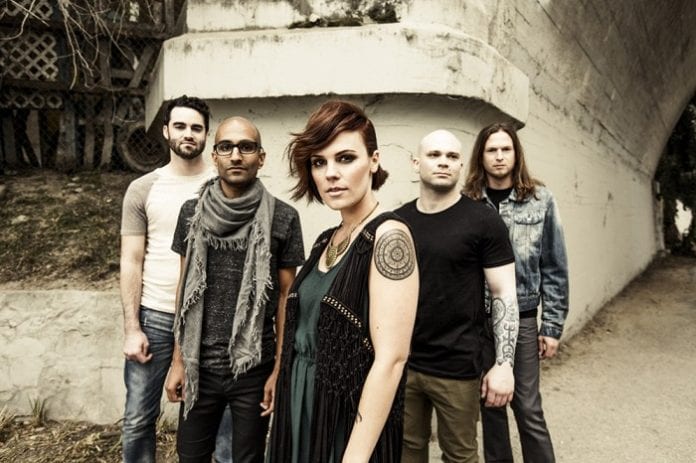 We had the pleasure of chatting with Kristen May who fronts Flyleaf. Flyleaf will play at The Masquerade here in Atlanta, Georgia on Sunday, April 19, 2015 as part of the Revolver’s Hottest Chicks in Hard Rock Tour.

For someone who has never heard of the band Flyleaf, how would you describe your music?

It’s emotional alternative rock. Some of it’s heavy, obviously. There are some heavier influences, too, but I don’t think it’s metal, some people call it metal, but I just think it’s rock ‘n’ roll.

Where did the name Flyleaf come from?

From what I understand, the guys came up with the name. I wasn’t in the band at the time, but Flyleaf is the empty page before the book, so it’s like a metaphor for our lives, that there is this blank page that we can write anything on it that we want to.

How did you come into the band?

My previous band had broken up and I spent some time writing with my friends in L.A. and Nashville, and working in a coffee shop in Kansas City, as well. I really wasn’t looking for another band, I was just kind of doing my thing. My manager at the time called me and said the guys were looking for girls to come out and audition in Austin, Texas where they live and so I said, “Well, that could be kind of interesting.” Like I said, I wasn’t really looking for it, but I spent some time listening to their music and I just fell in love with the band and fell in love with the rock, the emotional quality of it. So I thought this could be awesome and I could play in a band again. I went out to their home and had dinner with them, then just kind of jammed out about 4 to 8 songs and it sounded good, so we just kind of bonded on that.

How is the Revolver’s Hottest Chicks in Hard Rock tour going?

After this Revolver tour, what’s next for Flyleaf?

Well, that’s a good question. Jared, one of our guitarist, is having a second baby, so taking about a month off, possibly still be writing, and maybe doing some small dates here and there, some radio shows, some summer festivals, and then hopefully, late summer and into fall, get some big tour sets going.

What inspired you to get into music?

Well, I come from a musical family, my dad plays guitar, drums, and trombone, and my mom sings, so I just have always been around music all my life. I just kind of thought that’s how everyone was. We always had different styles of music playing. We were never in the car without music plying, we were never by the pool without music playing, you know, we were never anywhere without music playing, so that was always a big part of my life. My brothers play, too. I always loved music, but I didn’t start writing music until I got my own guitar when I was 17, so I had a lot of lyrics and melodies together. I just kind of learned to play guitar and piano. It wasn’t until I joined a band that I knew this is exactly what I want to do. The collaboration of writing with other people, and getting onstage and performing, it’s just this kind of wonderful experience. For me though writing is almost like therapy — it’s a way I get out all my emotions and what I’m feeling. Sometimes it will make it onto an album and sometimes I’ll just write music for myself. It is something that I think will always be a part of my life.

Do you have one favorite experience?

There so many! That’s the wonderful thing about touring as long as I have, since 2002. You see so many things, you meet so many people. I honestly don’t think I could pick just one because there are so many amazing experiences. The last tour we did last year for the album Between the Stars, took us to the Grand Canyon and it was kind of being there in that moment and then taking in the fact that I joined this new band and taking in the beauty of God’s creation which is so big and me feeling so small. It was this beautiful kind of experience for me. There are those days off that you get to see parts of the world and things you would never get to see, but it’s also the shows — to be there and meet the fans after the shows. So it’s hard to pick just one experience because we have such great and amazing fans to just share those experiences with us and the love of music. It’s really, really rewarding.

What’s the name of your most recent album and current single?

The album is called Between the Stars and the single we’re working on right now is called “Thread.”

What advice would you give to new musicians or artists who are up and coming?

Know your voice and trust that voice. Realize you’re the only one with your voice. Be proud of who you are and realize you have something unique to share no matter what anyone else says. In this industry you kind of have to find your thick skin, and you also want to be gracious and to accept what people are saying. I think you really need to stay true to who you are and know you have a voice and you need to listen to that.

Where do you see yourself in 10 years?

In 10 years I hope to have a couple of babies and living in Kansa City with my husband and making more music that I love, which hopefully other people will appreciate.

Flyleaf is currently touring Revolver’s The Hottest Chicks in Hard Rock. Look for them coming to your town soon! Check out their site to learn more about the band, their music, and upcoming tour dates HERE.