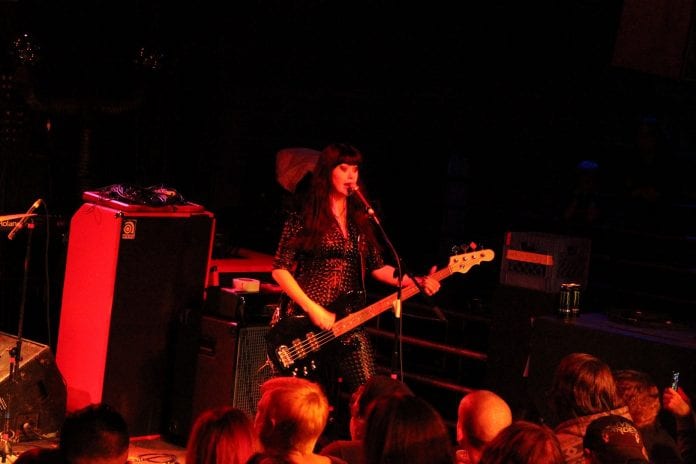 Die So Fluid played the Hell stage at the Masquerade with Eyes Set to Kill and Wednesday 13 in January. Guitar Girl Magazine caught up with them to catch a quick interview with this talented band!

GGM:  How would you describe your sound to people who haven’t heard your music?

Grog: Desert vampire rock. It has metal and post punk influences, but we maintain our own distinctive sound which is also very melodic.

GGM: Who is the band influenced by and who are each of your personal influences?

Grog: We all share certain influences such as Deftones, Soundgarden, The Cult. I listen tons of different stuff from Siouxsie and the Banshees to Misfits to Mastodon.

Drew: The Cure and the Ramones

GGM: How do you know each other, when did the band form?

Grog: We’ve known each other for many years since we were in previous bands on the London scene. We went to each other’s gigs and there was a large circle of interconnecting friends. Drew and I were in a 4 piece band called Feline and when we discovered the sound, we could create as a 3 piece. We invited Al to join in drums to complete that sound, and that’s how DSF was born. That was about 15 years ago, we’ve had some ups and downs, taken some time out to make money with session work along the way, but all with the ultimate goal of keeping the band growing and able to make albums.

GGM:  What is next for the band?

Grog: We’re currently on tour in the US with Wednesday 13 and Eyes Set To Kill, and we go out in March with The Dreaming for a West Coast tour. We’re determined to tour as much as possible in the States this year to increase our presence and get the word out! We have a new album to promote called The Opposites Of Light.

GGM: Is there a band that you want to see play live that you haven’t seen before?

Grog: Depeche Mode is the only band I can think of that I love, that I haven’t had the opportunity to see yet. Oh,and Alice Cooper- he rules.

Al: I’ve seen most bands I’d like to see, but it would be cool to go see Morrissey though.

GGM: What kind on guitar do you play?

Grog: I play a G&L L2000 bass guitar and am lucky enough to be an endorsee. I own 3, they’re the ultimate bass.

GGM: How long have you been playing your instruments?

Grog: I started playing bass when we were auditioning bass players for my first ever band. No one was fitting the bill, then a light bulb went on over my head and I picked up this guy’s bass and realized I could play it myself — ha-ha! That was about 20 years ago I guess!

GGM: What kind of energy do you get from the crowd?

Grog: My favorite gigs are when the crowd and the band feed off each other’s energy and everyone connects right there in the moment. That’s what it’s all about! It’s a special shared energy you don’t get in any other situation and that’s why music rocks live!

GGM:  What is your favorite song and who is it by?

Grog: I have a few but I’ll pick Deftones “Be Quiet And Drive (Far Away)”

GGM:  Where do you see yourselves in 10 years?

DSF: “Stadiums baby. Or maybe by then we can perform on Mars and beam it throughout the universe!”

Die So Fluid is a great live band and is presently on tour with Eyes Set to Kill and Wednesday 13. This band is talented and the future for them is bright. Looking for a good music show, go have fun and see them live.

Die So Fluid Music can be found here.

For more on Die So Fluid, visit their site at www.diesofluid.com.