Home Guys Interview with Nick Perri: Christina Perri’s ‘l amante“ Her other half and... 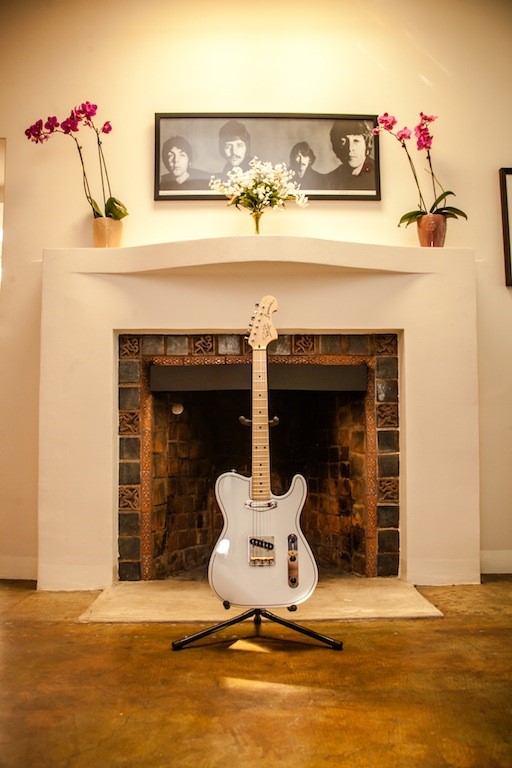 Perhaps you may know Christina Perri for her songs “Jar of Hearts” on “So You Think You Can Dance” and “A Thousand Years” on “Twilight’s Breaking Dawn” or from seeing her on some of her television appearances on “The Early Show on CBS,” “The Tonight Show with Jay Leno,” or “Dancing With The Stars,” but Guitar Girl Magazine was able to get to know more about who she really is and learn about a precious gift given to her from a place beyond love.

When we’re talking about her “other half,” we’re not referring to a husband, as she’s not married, but instead about her older brother, Nick. From a phone interview from his place in Los Angeles, he was able to give us some insight of what it was like growing up together, inside stories of when they hang out, and their very special bond.

What was pleasantly surprising about talking with Nick about he and Christina is, he laughs, “Oh, we’re the same person. When we’re both in the same room, it’s like too much Perri.”

GGM:  What was it like for you and Christina growing up?

Nick:  We grew up in the suburbs of Philadelphia. We’re jokesters and it was fun and funny. We’re not twins, but we would wear matching outfits and sing and dance. Our parents were very supportive and they would inspire us to perform. Early on we became to truly believe that we were destined to be performers.

GGM:  How would your friends describe you?

Nick:  For me, hardworking, focused and fearless but all the while not taking myself too seriously. For Christina, she’s a very caring and generous person. While she’s super busy, she always makes time for the people in her life. When we’d hear that we would never make it outside of a small town, it made us all the more determined to do so.

GGM:  When and how were you turned on to music?

Nick:  When I was 12, my Aunt Teresa, we called her “Aunt Dode,” listened to all these great bands. She would slip me cassettes under the table to listen to like AC/DC’s “Highway to Hell” and Pearl Jam’s “10,” she’s so awesome! I gravitated towards players like Angus Young and Jimmy Page, but I don’t sing…Christina does the singing.

And so begins the story of the gift from beyond love…

GGM:  What was your first guitar?

Nick:  It was a bright blue Aria acoustic guitar. I wanted an electric but my father, while not a musician himself, had the worldly wisdom to insist that I first master the acoustic. I devoted two years to my guitar and at that point, I felt I could really play while a lot of my friends who had electric guitars, amps and pedals, were just making a lot of noise.

GGM:  What got you started on working on them?

Nick:  I’m always curious about how things work, what makes their heart beat. After my Dad taught me how to solder, I was immediately drawn to electric guitars. I started swapping out pickups and parts and was constantly tweaking them to make them better. If you look at my desk now, there are parts all over it. It’s my passion…making electric guitars play, sound, and look beautiful.

It was my wife, Misi, who had the spousal clarity to point out how I was buying guitars only to completely strip and rebuild them to my own creations. When she suggested I build my own, the clouds parted, the sun shined, and the angels sang. Since 2008, my goal has been to build some of the finest American-made custom guitars. We don’t cut any corners. I want to make the best guitars humanly possible!

GGM:  What are your feelings about building custom guitars?

Nick:  PERRI INK. Custom Guitars are made by a musician for musicians. That’s the spirit of PERRI INK.

(Editor’s note: As Christina shines in the light, Nick too has been musically radiant with his playing with Shinedown, Perry Farrell, Silvertide, Matt Sorum, Sinai and with Christina.)

GGM:  What was the inspiration behind Christina’s guitar, l’amante? (Italian for “The Lover”)?

Nick:  As you may already know, she’s a huge Beatles fan. The pictures of her with her guitar were taken in her living room. She wanted something with a Beatles / George Harrison feeling to it. Also, a guitar that is timeless and classic…and white, so it would go with her ever changing wardrobe and photograph well. I told her it would be an honor to make it.

GGM:  What went into making her guitar?

Nick:  She trusts me completely and there was no pressure from her about it, but it was the most intense pressure ever I put on myself to make it perfect for her in every way. But there was more to it than that as I felt inside what it had to be. Knowing her in her heart of hearts, I knew it had to be a lightweight alder body, T-style guitar but contoured like an S-style guitar to blend seamlessly with her body and with a neck that would fit lovingly into her hand. And it had to have a warm, clean, amazing tone so it would be an extension of her soul. Her guitar had to be…well, her.

I went through every part, thoroughly scrutinizing it until I was for sure it was the one, every part. For example, she uses the neck pickup more for its warmth so the Bare Knuckles Yardbird pickups married with the RS Guitarworks capacitors were absolutely perfect. Once the guitar was built, its crowning jewel was its paint job done by none other than Bobby Bordeaux of French Kiss Kustoms. Who better to give your baby to than someone who has devoted his life to painting? It’s so much more than white as the more you look at it, the more you see. The color is actually Cadillac pearl white with defining contour stripes. It’s stunning to see and hear, for sure.Christina Perri l’amante custom guitar by PERRI INK. (photo credit: Austin M. Bauman)

GGM:  Was there anything you two disagreed on?

Nick:  The one thing we couldn’t agree on and we went back and forth over was the font. So she took a marker and handwrote l’amante and her signature and I wrote Perri Ink.  We both feel really good how it turned out.

GGM:  What does her guitar mean to both of you?

Nick:  I love my sister and how her guitar is an extension of her. It was an honor to build as it was like the culmination of all my years designing and building guitars. It’s extremely rewarding for me to see her playing it. When it was finally ready, she hadn’t ever seen it as I wouldn’t send her pictures as I insisted she see it in person. I took it to her house and laid it at her feet. She knelt down, opened the case and put her hands to her mouth. She immediately picked it up, put it on and said, “It feels mine.” It’s the perfect marriage between artist and instrument. I spared no expense or time to make her guitar. It was my gift to her from beyond love.

GGM:  Can people get a “Christina” guitar?

Nick:  Yes, it’s listed on the site as the l’amante and we’ve already been getting orders for it. Her guitar was featured at this year’s NAMM show. Right now there’s a ‘$500 off’ sale on them.

GGM:  What should someone do if they want one?

Nick:  Contact me or anyone at PERRI INK. Custom Guitars. Whether they want Christina’s guitar or another PERRI INK. guitar, every customer is treated like family. Every guitar starts with an idea and we go through as much upfront details as possible and then building starts from there. It usually takes about 8-12 weeks to make one so changes can be made along the way.

GGM:  What do you want people to remember about Christina’s l’amante and PERRI INK. Custom Guitars?

Nick:  With Christina’s guitar, I made it with the absolute most loving care possible. It’s truly a gift from my heart to hers. And as with any PERRI INK. custom guitar, it’s a one-of-a-kind instrument to last a lifetime. As I always say, Custom made, American made, and built with love!

For more on Nick Perri and PERRI INK. Custom Guitars, visit their site at www.perriinkguitars.com. For more on Christina Perri, visit her site at www.christinaperri.com.