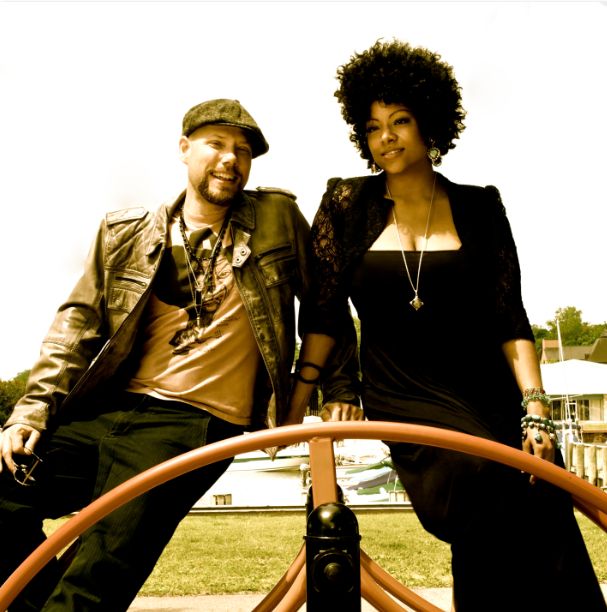 Adam Levine described Nicole Nelson’s voice as “One of the most powerful voices I have ever heard.” Cee Lo Green said “Your voice is like mother’s love.” In 2012, the guitarist and singer of the duo Dwight & Nicole appeared on NBC’s hit show The Voice wowing all four coaches during the blind auditions with her performance of Leonard Cohen’s “Hallelujah.” Fans instantly fell in love with Nicole and her performance rose to #26 on the iTunes Pop charts. Later that year, Nicole won the Boston Music Award’s “Female Vocalist of The Year.”

With their new album titled Shine On due out in April 2014, Dwight & Nicole are gearing up for what appears to be a very promising year for this dynamic duo from Boston. With heavy influences from Etta James and Gladys Knight to Bonnie Raitt and Cyndi Lauper to name a few, Nicole’s voice and music are as diverse as her musical influences. Shine On will showcase her powerful vocals and soft, sweet harmonies with Dwight, and there are some jazzy tunes, as well as reggae, not to mention the song that garnered the attention of The Voice judges and fans, “Hallelujah.”

Nicole and her partner Dwight have had the pleasure to share the stage with such greats as BB King, Buddy Guy, Carly Simon, Chuck Berry, Natalie Cole, and so many other great artists. She took some time from her busy schedule to discuss with us her early beginnings, how she met Dwight, her time on The Voice, and her new album Shine On.

GGM:  Nicole, I read where you started out playing violin and piano before picking up the guitar. How old were you when you first started playing a musical instrument and which came first?

NN:  The piano came first. My parents had an upright that was literally my first love. Then came the little 3/4 sized acoustic that I got for my seventh Birthday. I was obsessed immediately! Violin happened when I was 11. I really loved them all.

GGM:  What was it that drew you to the guitar?

NN:  My dad played a lot of Clapton, Hendrix as well as Paul Simon. I always just thought it was so beautiful and expressive. I started begging for one when I was around six.

GGM:  Who were some of your early musical influences that helped shape who you are today as a performer?

GGM:  When was it that you decided to pursue music as a profession and was your family supportive of this decision?

NN:  My mom was always very supportive- she’s a very talented artist and understands that whole kind of mad passion. It took my dad longer to warm up to it. I think he had real hopes that I would be a scientist! Something a little more steady.

GGM:  You were on Season 3 of The Voice and performed “Hallelujah” for the blind auditions. How did you choose that song and what was going through your mind when ALL FOUR judges turned around?

NN:  “Hallelujah” is just the world’s most perfect song. I sing it at all of our shows. It covers the full range of human emotion and singing it is like therapy for me. It’s deeply healing- and I hear that people feel that when they hear it too. How beautiful is that?!  At the moment all four coaches spun around and smiled my mind was blown!! It’s not easy to describe it but I think I was feeling a combination of elation and relief. It hit me that I was about to be a cast member of the most popular show on NBC and that my life’s trajectory would be changed forever.

GGM:  How did you get the opportunity to audition for The Voice?

NN:  Actually, the opportunity landed in my lap via a producer I’ve worked with in the past. He recommended me to one of the producers on the show and they arranged for an audition in New York. It went  really well and the rest is history!

GGM:  Adam Levine described your voice as “one of the most powerful voices I’ve ever heard.”  That’s a pretty big compliment! And, you just recently won “Female Vocalist of the Year” at the Boston Music Awards. Congratulations! How did you develop such a powerful voice or are you just a natural?

NN:  Thank you! Singing is the most natural thing in the world for me. I’ve always felt such a love for music that I was immersed in it pretty much non-stop. So I guess you could call it a combination of natural talent and obsession!

GGM:  What’s the best piece of advice you took away from your experience on The Voice?

NN:  Adam gave me lots of great advice! It’s hard for me to actually narrow that down but here’s a particularly good bit- I asked him about how to handle negativity in the music business and he gave the best analogy. He had spent some time in Africa at one point and just barely missed a run-in with a wild lion. Afterwards, he asked one of the guides what is the best thing to do if you find yourself face to face out there with an animal like that and the guide said (paraphrasing), “Never run or they will immediately chase you and they will catch you. Don’t show your fear or they will instinctively attack you. The only thing to do is stand your ground and pay them no mind at all.”  Isn’t that great? (I’ve added pray to that list!)

GGM:  You’ve played with several other bands in the past as well as your own band – the Nicole Nelson Band back in the early 2000’s. How did you end up meeting Dwight Ritcher and forming Dwight & Nicole?

NN:  I met Dwight in Boston in 2002 at a Blues jam at the Yardrock. We were both really young doing something fresh and new in the Boston blues scene fronting our own bands. We became friends an fans of one another early on and would share the stage a lot so it was really a natural progression. We both found ourselves living in Brooklyn, NY a few years later and started doing shows together for fun – and it all sort of blew up and took on a huge life of its own!

NN:  It was pre-Dwight & Nicole actually – Dwight and I were spotted separately at two different shows in NYC (days apart!) by the producer who asked us to take part in an upcoming film about the exciting music scene that was bubbling up in NYC at that time. It was an incredible experience. The craziest thing was being at the premier and seeing ourselves on that huge screen… just larger than life!

GGM:  You’re releasing a new album titled Shine On in April with Dwight as a result of a very successful crowd-funding campaign through Pledge Music. Can you tell us a little about your experience with Pledge Music and your supportive fans?

NN:  Honestly our fans are unbelievable. We fan-funded our first album !Signs via our email list and selling pre-orders at our shows. PledgeMusic wasn’t around yet then and it was SO hard to keep track of everything on our own. Working with them for Shine On has been like a dream! They are a fantastic resource for indie artists and they are designed specifically to fund music projects. I recommend them highly!

NN:  Milt is an absolute angel. There are no words to describe how much Dwight and I love that man! His studio is attached to his home like Levon Helm’s beautiful place. So when we’re there we literally can climb downstairs in our PJs and get to work playing music and having the best time together! The three of us are musical soul mates.

GGM:  What was the inspiration behind the album and what can your fans expect to hear?

NN:  Shine On is a collection of audio representations of the ups and downs and in-betweens of being human in 2014. Listeners can expect a beautiful full range of expression- and our homegrown earthy style. You can tell that we cut our teeth on the blues, but this album sounds like much more than that. There are many layers.

GGM:  How do you and Dwight approach writing and creating your music?

NN:  Consistency! We just keep on doing it as much as possible. We write when we are on tour, at home, in the bath, at the park, when we’re happy, when we’re sad… Just keep those good juices flowing.

First concert I ever attended was: Smokin’ Grooves Tour 1997!  The Fugees opened for Cypress Hill

My dream performance would be: Carnegie Hall with Mavis Staples and Dr. John

My guilty musical pleasure is:   Toxic by Brittany Spears