Home Interviews Interview with Pi Jacobs on her background, gear and her latest EP... 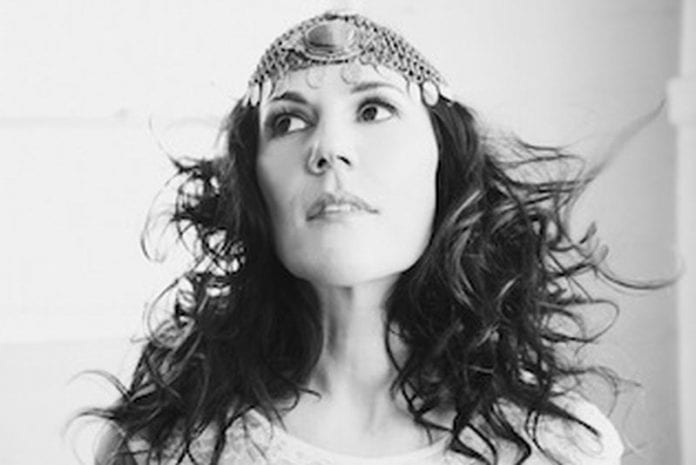 Pi’s songwriting ability, powerhouse vocals, and guitar prowess shine through on this EP with songs written with conviction based on life experiences. Songs like “Want To Want To” which Pi says is about being afraid to go for it, “Starting Now” inspired by the tragic story of the kidnapping of three young women by Ariel Castro, “Icy Road” on staying the course against all odds, and “The Train” about “the trains we take to vastly different lives,” says Pi. She slows it down on her cover of Zeppelin’s “Babe I’m Gonna Leave You” and follows that with the last song on the EP “All for You,” a song about love and intimacy.

Pi shared with us her diverse background, her musical influences, life in the music scenes of Northern California, New York City and Los Angeles, and the background and inspiration for Hi Rise Ranch.

GGM:  With the release of your new EP Hi-Rise Ranch due out in April, can you tell us what fans can expect to hear and a little about the music?

PJ:  Fans can expect it to rock, but also have a lot of beautiful, soulful 3 part harmonies. I’m proud to say that a lot of the songs on this album are inspired by other people (I get tired of writing about myself). There are songs about Grandmas, Kidnapping Survivors, Star-Crossed lovers and, most importantly, Satisfied lovers!

PJ:  Right when I started working on this record, I participated in this show / contest here in LA called Top-Tune, where you have to write a song in 17 minutes in front of a live audience. I was really nervous about that show, so I started trying to write songs in 17 minutes on my own to prepare. A lot of those attempts became the songs for Hi-Rise Ranch. I realized that I didn’t need to be so precious with my work, and that a good idea can come instantly and hold up – I started just grabbing those “instinctual” hooks and forming the songs around them.

The recording itself feels a lot more “band like” than many of my previous works, and that is indeed due to working with the same fabulous crew. It can take years to find the right people – those who bring your imagination to life in a way that’s better-than, but in-line with, your original vision. My band, Kel (Background Vox), Rita (Background Vox), Fredo Ortiz (Drums) Eugene (Producer), and Jaime (Bass) are actual friends, and that makes a huge difference. I know that when I bring a song to these people they will not only get it, but they will bring their own special genius to their part, in a way that makes it magic.

GGM:  “Starting Now,” one of the songs on Hi Rise Ranch, was written about the horrific story of the three young women that Ariel Castro abducted and held captive for years. What was it that inspired you to write that song and do you know if the young women ever heard your song?

PJ:  I was listening to a psychiatrist talk about Michelle Knight, Amanda Berry, and Gina DeJesus right after they escaped. His comment was that they “would never be normal and need years of psychological assistance” (I’m paraphrasing here, I’m sorry – I don’t remember the exact words). It made me really angry, that they were finally OUT of this horrific situation, and some “expert” was condemning them to a life of “broken-ness.” The song is really about my wish for them, and of course, my wish for myself, though I have nothing that compares in my life. I sincerely wanted them to be able to just walk away, start over, and live. When I play the song live, so many people have come up with different interpretations of the song – I’ve heard stories from veterans, and cancer patients… all kinds of survivors. I think the feeling is  universal – you survived something unspeakable, and now all you want is to start over, enjoy what’s left of your life, enjoy your freedom, and not give a second more to the evil thing you just overcame.

I don’t know if Michelle Knight, Amanda Berry, or Gina DeJesus have heard the song, but I hope if they do, that they will see it as an homage and tribute to their courage.

GGM:  If you had to choose one song from Hi Rise Ranch as your ultimate favorite to perform, which one would it be?

PJ:  I really love playing “Want to Want to.” It’s a fun song, but I love the subject: being “afraid to go for it.” Like most of my songs, the theme is about the obvious (sex), and about the not so obvious (all the ways we hold ourselves back from the things we really desire – job, friends, lifestyle, where to live, and of course, love).

GGM:  Reading your bio, you have a very interesting and diverse background. Tell us about your upbringing and how it has shaped who you are as an artist today.

PJ:  I was raised in San Francisco in a mixed race family (English-Irish mom, Filipino dad, African-American step-grandma and cousins). My mom was a hippie, and I grew up with a lot of gay people, so while most people are raised in a culture, I was exposed to several cultures. It was often confusing, but the best part of it, was that there was always so much music and art around. I really have to credit my mom for always having music, theatre, dance, politics, art, and beauty in our lives. No matter how poor we were – we always had art in our lives, it was our “religion” and our “community,” in the way that many people have church.

GGM:  Carole King’s Tapestry was your very first album. You had many different musical inspirations throughout your career, but what was it about Carole King that drew you in?

PJ:  It’s hard to know what I was thinking, I was very young. But when I think about those songs now, I think that they are wonderful snapshots of ordinary life – exposed by simple poetry, and great melodic hooks. As a singer, I love her blend of soulfulness and storytelling – and her writing style is so tasteful and hooky.

GGM:  Who were some of the other major musical influences in your life?

GGM:  You started singing at a very young age – I believe you were three – and then continued on throughout school. When did you start playing guitar, and then the decision to learn to play bass?

PJ:  Yes, I was three when I started singing in public -I was attending a “hippie pre-school” in the Haight. They had a choir, and I sang in it – I even had a solo, which I totally chowed, so I seem to have blocked it from my memory!

I started playing guitar when I was 10 or 11. When I was 15, I switched to bass, and ended up going through music school as a Bass / Vocal major. At the time I was really into jazz, and playing a lot of fast, complicated music- trying to prove myself. After I got out of school, I got back into pop music, and playing guitar as a better way to accompany myself on the songs I was writing.

GGM:  Having been raised in San Francisco, you also had the opportunity to live in New York and then ultimately Los Angeles.  How do you feel the music scenes differ in each of those cities and what did you learn from those experiences?

PJ:  I will always love San Francisco, it’s my home, and my family and best friends are still there. There is still a great “counter-culture” vibe that has survived since I was a kid in the Haight, but it’s a very small city, and limited in the amount of work a musician can do there. New York was so instrumental in my growth – it was the first place I went after I “left home.” The first night in town, I went to Sidewalk Cafe’s open mic wearing my pajama top (my clothes hadn’t arrived yet). This guy named Latch ran the open mic, and when I said I was new in town, the whole room said “welcome to NY! F-U!” Then I played my song, and Latch booked me a gig on the spot. It was a great welcome, to an amazing songwriter community. I still miss that, and I still return to NYC to play regularly (xoxo ROCKWOOD MUSIC HALL!).

Like all good Northern Californians, I was raised to sort of resent LA.  I came to LA kicking and screaming to follow a man (my husband), but within a few months I was in love:  with the easy living, the easy rental prices, the easy weather, the abundance of creative people that are surviving and thriving doing what they love. I realized I could be a “working musician” in this town, and no-one would ask me what I “really” did for a living.

PJ:  The new album comes out on April 14, we have a big party planned in LA on April 12 at The Grand Ole Echo- which is one of the coolest Americana residencies in town. Later in the year, I’ll be doing a CA tour, NYC and, I hope, another European Jaunt (probably in the fall). We’ll be hitting radio hard, so listen for it on your favorite indie and internet stations, and if you like, please request us.

GGM:  Can you tell us about your gear?

My workhorse, and probably most important guitar is my acoustic – a Martin Jumbo – most of my stuff is written on that, though I don’t always play it live.

For more on Pi Jacobs, visit her site HERE.