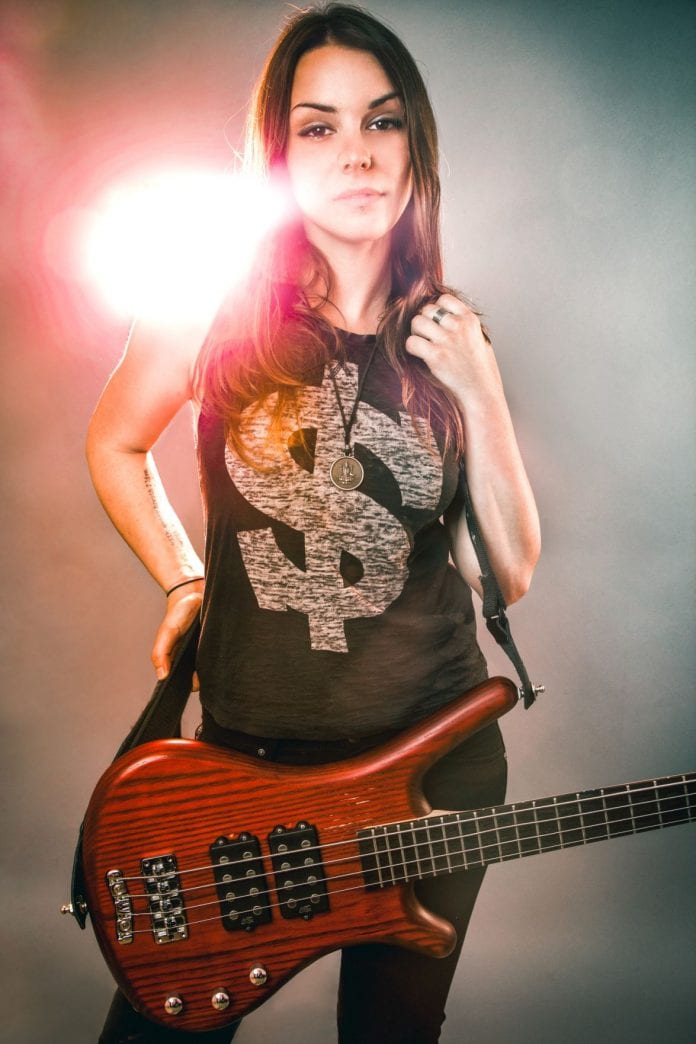 Last month on this site, we featured an interview with bassist Amanda Hamers and guitarist Rich Keane of Sunshine & Bullets.

That interview, of course, took place back in early April, when Sunshine & Bullets headlined an event in downtown St. Pete that was a release party for their current album Triangulum Mechanism.  While there, I also got to interview a woman who, like Amanda Hamers, also plays bass and sings, and whose band got to open that night for Sunshine & Bullets.

Serbian-born Sanja Jovanovic fronts a band out of the Orlando area called Anyone’s Guess, which has been around for about 8 years.  Together with guitarist Clint Chambers and drummer Matthew McCormick, this trio delivers a unique mix of hard rock and alternative sounds.  How so?  When  blogger Amanda Darrock of Wordkrapht reviewed their EP from earlier this year,March in the Dark, Chapter One, she described their sound as “addictive, raw, dark and core-shaking.”  Having watched them live, I would say those words carry over onto the stage, particularly the “dark” part, as witnessed by songs like “Apathy,” “Hunter,” and “Leavin’,” which they’ve been licensing for potential soundtrack play.

Bands ranging from Tool and Staind to Foo Fighters and 30 Seconds to Mars have influenced  Anyone’s Guess’ style, along with some classic Alanis Morissette touches thrown in for good measure.  Sanja also mentioned a few others who influenced her as well, like Garbage [with lead singer Shirley Manson] and the Cranberries [with Dolores O’Riordan], while also acknowledging, “I was raised on the Beatles and Led Zeppelin.”  But, while she had been performing professionally in Serbia, it was not long after her emigration to the US that a major concert she happened to attend became a sort of inspiration for her to resume her music career.

“When I moved to Orlando,” Sanja said, “I didn’t have much going on.  I went to the Shakira concert, and  it was kind of like everything just snapped me back into wanting to be in the music thing.  I didn’t expect Shakira to motivate me, but she did.”

Anyone’s Guess is the first and only band that Sanja has been in since she moved to Orlando, and I asked her how the band’s name came about.

“Anyone’s Guess is actually an idea that our original drummer came up with,” Sanja said.  “When we came together, we really had no direction, we all came from completely different backgrounds musically, and we didn’t know what was going to come out of it.”

Though she first learned acoustic guitar before taking up the bass,  Sanja started out as lead singer when Anyone’s Guess began.  Gradually she began playing some electric guitar, but when their bassist left, finding a replacement wasn‘t all that easy.  Sanja said, “I lost my patience and grew tired of looking for a bassist, so I picked up a bass and learned to play it.”

As with many of my interview subjects, I asked Sanja if Anyone’s Guess would sign with a major label should it offer them a contract.  “We like [indie] because our label is really cool about keeping our independency.  Our label doesn’t have any ability to do something they want to against our will, nor do they want to.”

I asked Sanja about a subsequent tour stop for Anyone’s Guess:  Rome, Georgia.  Given that it’s located about halfway between Atlanta and Chattanooga, many touring rock bands would consider Rome to be an out-of-the-way place, but Anyone’s Guess didn’t find that would stop them from playing there.  “We wanted to make as big an impact as we can off this tour, because our budget isn’t that big,” Sanja said.  “If we played a city like Atlanta, not many would think of us as an event when there are 10,000 other things going on.  But if we show up in Rome, since not many rock bands are in that area, the 40 or so that do like rock music will think we’re worth seeing.”

Subsequent to that, when I asked Sanja by e-mail how that Rome tour stop went, she told me that it went good despite its smallness. “The staff at The Lantern was so friendly and we were greeted with true southern hospitality. We got some new fans there and met some really good people that we’ll definitely stay in touch with.”

As for the tour that concluded, Sanja told me that Anyone’s Guess more than broke even, which, as she put it, was fantastic for a “DIY” tour.

And as sure as Sunshine & Bullets got to submit their own music for the “Unsigned Band Review” segment of the Tampa-based, nationally-syndicated Bubba the Love Sponge radio show last year, so, too, did Anyone’s Guess.  Bubba and his gang liked them so much that they were invited to appear late last April and play live in their studios on a specially-built stage.  Sanja told me that they had so much fun on Bubba’s show that it felt like time was flying by for them.

“It felt like 60 seconds to me although we played three songs and talked to Bubba and the crew in between,” Sanja said. “I’ve shared the stage with the guys for quite some time now so the actual part of playing live is kind of like logging into a computer when you walk into the office- it’s in the muscle memory. I think the part before we took the stage is what I am not used to. We were in this awesome green room with a free beer dispenser and a pool table. One of the guys walked in and gave us this intimidating speech about Bubba with some off-the-wall rules that involved no eye contact with Bubba, etc. We didn’t know if we should take him seriously, or if they were playing a joke on us.

“They were, of course, because we discovered that Bubba is seriously one of the most approachable, nicest people ever.  On top of that scary speech we were given, imagine sitting in a room between Matt, who is a born pessimist, and was 100% convinced that we will get buzzed off before we reach the middle of the first song, and Clint who on the other hand is the most optimistic person I’ve ever met. He was like that happy bubble in the Zoloft commercial- stretching, drinking a beer and cracking jokes.”

Besides performing “Apathy” and “Hunter,” Anyone’s Guess, per the Bubba show’s guidelines, were also told to pick a cover tune, and for that, they chose a rocking version of Lorde’s Grammy-awarded hit from last year, “Royals.”  It was an easy choice, though, as Sanja explained.

“We are a house band at The Manor, which is this pro wrestling/comic family dinner theatre. We play live sets between the matches and the owner of The Manor sometimes request[s] that we learn certain songs. Lorde’s ‘Royals’ was one of the songs we had to learn for the Manor a few weeks before, so since it was fresh and popular we decided to bring that one to the Bubba show.”

In addition to March in the Dark: Chapter One, Anyone’s Guess have also recorded two prior albums, Point: Counterpoint, which was their first album back in 2008, and Cost of Silence in 2010.  They already have a video on YouTube for their song “Apathy,” and are about to come out with one for “Hunter.”  Plus, as Sanja also told me, they will also have another EP out later this year, with a tour to follow.  So there’s no need to guess how Anyone’s Guess will continue to deliver on what they already have accomplished, and will continue to.

And, as Sanja mentioned above, Anyone’s Guess is also the house band for The Manor Professional Wrestling Dinner Theater, which stages its events in Kissimmee, Florida, just south of Orlando.  You can order tickets by visiting www.manorprowrestling.com.