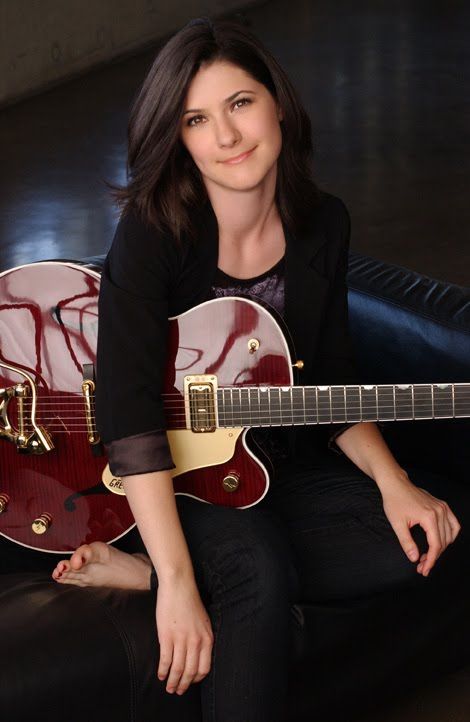 The bubbly and beautiful singer-songwriter, Sara Niemietz, is such a fun woman to interview that she and I always have a great time when we conversate. Sara has had a busy year, with the release of her newest album, Push Play, that she has been promoting since the release of it in June. She has also completed a duet with  B.J. Thomas‘s upcoming record, as well as accompanying Richard Marx on his first Christmas release, Christmas Spirit, her second time to work with Richard.

Sara took time to answer questions about women who have influenced her with music, as well as her mentors, along with what her fans can expect from her the rest of the year and into the new year. Read on to gain insight into Sara and her music:

GGM: How do you relate to other women musicians in this “industry”? Do you feel that it’s tougher on women to make a name for themselves in music than it is for men? Why or why not?

Sara: There are so many incredible female musicians making a great name for women in the music industry!  Naturally, there is a different perspective many female artists are able to share that is a great asset to the music world.  I relate well to fellow female musicians and always make a point of supporting artists (whether they are female or male)!  It’s true that women are sometimes faced with certain stereotypes, but all-in-all I believe that it’s about being true to the music and the individual artistry and letting all of that fall by the wayside.  I fully believe in music’s ability to shatter any gender-related boundaries. Ultimately, good music is good music, no matter who makes it!!

GGM: You are a multi-talented musician.  What musical instruments do you play and how long have you been playing?

Sara: I play guitar, bass, and piano. I got my first guitar when I was 12 or so. My bass followed soon after; I was 14. Piano has been in my life (and around the house) from a very early age. My mom plays and I can’t ever remember there not being a piano or keyboard nearby.

GGM: What do you feel are the ups and downs for women in music? Have any personal experiences to share?

Sara: I have heard plenty of stories about disadvantages and adversities women have faced in music, and it’s heartbreaking, because to me music is one thing everyone can come together on – it’s a great uniting force! Thankfully, on the whole, I haven’t been up against too much of that.  I’ve been lucky to work with and be surrounded by supportive folks that place the focus where it should be: on the music.  I always think of that Stevie lyric: “Music is a world within itself, with a language we all understand.”

GGM: Who are your “mentors” as women in music?

Sara: With regard to women that I know, my mom has been a very strong, positive force. She is tremendously musical in her own right and music has always been such an integral part of my life for as long as I can recall. As far as women, I don’t know (but have spent more time listening to than I can sum up), Janis Joplin and Aretha Franklin have been two of my big heroes growing up.  I have so many memories of car rides and childhood adventures with them as my soundtrack! A little bit later on, I began listening to a lot of Etta, Ella, and Billie. These women run the gamut stylistically, but what really fascinates me is their combination of brilliant singing and storytelling.  Listening to them sing, you’re living something with them, and there is such sincerity – such raw emotion!

GGM: When you and I interviewed last time, your focus was on your recent album, Push Play. I have followed your updates, and you have recently worked with Richard Marx, recently recording a duet on his upcoming Christmas album. How did that collaboration come about?

Sara: Yes! I have been fairly focused on asking listeners to push play on Push Play!  That’s been a great time!! When I was in Nashville (recording for BJ Thomas’s new album), Richard Marx called and invited me to record on his Christmas Spirit album.  He flew in and we tracked vocals! It was so much fun – his record is full of gorgeous songs and heart-string-tugging arrangements and I’m just thrilled to be a part of it.

GGM:  What can we look forward to in the future with Sara and her work?

Sara: I’m playing out a lot in the LA (and So-Cal) area, so there’s always something new to see out there! (Dates on website). I’m finishing up my own Christmas EP now (which will be out very soon)!  It’s a musical gumbo of some of my favorite Christmas songs along with a lot of the musicians from my last EP.  W.G. Snuffy Walden and I produced it together and he plays some beautiful guitar on there! My duet with B.J. Thomas will be on his new CD (to be released the beginning of 2013)! Lots of new originals and some covers (with accompanying music videos) are moving steadily forward as well!  I’m just loving spending my time creating, learning, and sharing music!

A huge THANKS to Sara for taking the time to interview with Guitar Girl Magazine!

Find out Sara’s upcoming performances by visiting her website.