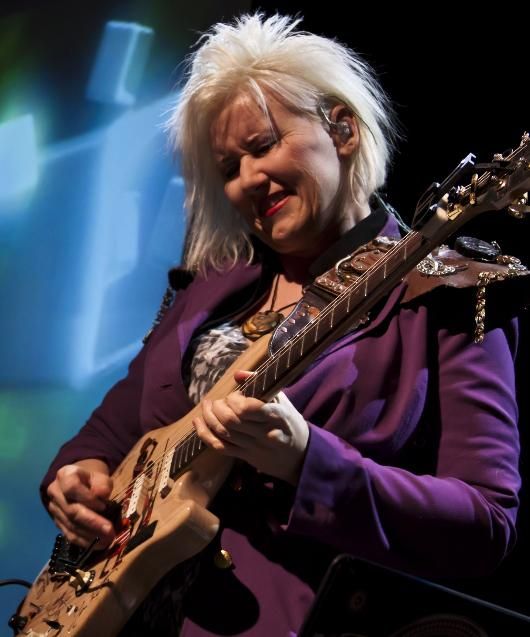 The high priestess of shred, Jennifer Batten, has a reputation virtually unparalleled in guitar circles. She is one of the most technically proficient and innovative players in rock and possesses an incredible resume. Most widely known as Micheal Jackson’s lead guitar player from 1987 to 1997, as well as her work with Jeff Beck, Batten is an “A Level” live and session player, solo artist, master guitar instructor, author, and steampunk artist with her own Etsy shop.

Guitar Girl Magazine was able to catch up with Batten via email while she was traveling in Brazil to talk about her perspective on a number of topics, including her definition of tone.

Clearly, you are someone that has put in massive amounts of practice hours to master your instrument. What do you feel are the essential elements to work on if one is trying to make a career as a guitarist?

To become a pro, you need to work on all the tools of your trade just like a carpenter needs to know how to measure, use a drill and saw, AND know the properties of various woods.

Musicians Institute set me straight with all the elements; from learning how to read music and chord charts, knowing scales and arpeggios all over the neck, knowing chord chemistry, and learning how to transcribe music. Some of these elements are not deal breakers, like reading music. Loads of excellent players don’t read or can’t write music, but for every element you don’t get together, you’re restricted from that access and are less valuable in certain situations. You may be a great player, but perhaps someone will hire someone else that has more skills than you because it’s just easier for them, for instance, to be able to deliver written charts and not have to explain things verbally.

When songwriting, do you prefer to collaborate with others or write on your own?

I prefer to write on my own. It’s easier to get in a creative zone with zero pressure. I’ve done both and find the strongest personality tends to make all the decisions.

Do you have a favorite mode of the major scale? Dorian, Lydian, Locrian?

My favorite is a combination of Mixolydian and minor blues for a dominant chord. So, for instance, when playing over a G7, I have a huge palette of 9 notes to choose from: G, A, Bb, B, C, Db, D, E, F

What are you working on when you practice these days?

I get into different bags at different points of my life. I’m getting more into economy picking or small 2 to 3 string sweeps as well as getting deeper into chromatics. I’m launching a new local Portland band this summer also, so I’m spending a load of time memorizing new tunes. I discovered Aretha Franklin’s version of “Rolling In The Deep” and am working on copying every nuance of her original treatment of the melody because it gave me chills with all of her any surprises on first through tenth listen!

Any new musicians/music on the scene that you are digging right now?

Mateus Asato and Lari Basilio are fresh Brazilian faces that bring a hell of a lot more to music than the standard blizzard of meaningless notes that has glutted the guitar scene in the past. I’m in Brazil as I write. This country is full of gifted players. I think they’re both living in LA now. They post a lot online and have gained a huge following.

What was the most important lesson you were able to take away from your time performing with Michael Jackson?

The importance of entertainment well above the music. There’s an audience in your face waiting for connection and emotional uplift. So, these days, the music itself is really not enough in most genres. I think that’s why I started doing a solo multimedia show. In that show, I cut videos to the beat for a whole other element beyond just playing guitar. I found that engages little kids that wouldn’t have the patience for just music, and enhances the whole experience for the audience.

What was your first concert?

I was very young, and it was Sonny and Cher.

“Your hands manipulate the guitar.”

We started to really talk about TONE…

Tone would be the combination of the gear you use and how your hands manipulate the guitar with a thousand nuanced moves. For that reason, you can have ten players play through the same system and same guitar and sound completely different.

I started using a modified Washburn Parallaxe (PMX10) guitar several years ago just because I was asked to check it out and I liked it. It’s designed very well, but it’s the first 24 fret guitar I’ve owned, so it took a lot of getting used to higher up the neck. Mine has a smaller scale than normal and also has three pickups instead of the standard two.

I keep it simple in the studio and started using the BluGuitar BlueBox speaker emulator with my BluGuitar Amp1. There are 16 choices of speakers as well as virtual mic placement, but for my gain channels, I use the Marshall 65 with it. At home, I’m using the UA Arrow 2X4 interface only because of a forced upgrade due to my Macbook Pro update. I actually hate it because it’s super fussy having now to use two windows and use their plugins. They hold you hostage to buy THEIR plugins, and I don’t want to, so my plugins are now minimal and for monitoring only. I usually print with Logic’s plugins.

“Work on all the tools of your trade.”

Every venue is different, and every new audience member changes the psychoacoustics. So soundcheck has almost zero relevance to the show sound. For the last three years or so, I’ve used the BluGuitar Amp 1. It’s under three pounds and has four channels, tube-driven, 100 watts, and is MIDI capable. I used it with the four cable method with my Digitech RP1000 for effects only. But I’m switching over to using the Line 6 HX Stomp; first of all, because of weight. The RP1000 is 12 pounds, and the HX is 1.7. The HX is also MIDI-capable, and the Digitech is not. So, finally, I can step on one button and have it change my effects as well as my amp channel. There’s way too much tap dancing to have to separately change the amp channel AND then the effects.

Prior to this setup, I used the internal amp models from the Digitech, which wasn’t ideal but was pretty consistent and fit in my suitcase. I’ve never wanted to rely on anything being provided when I travel, which is 99% of my gigs. The Amp1 was a game-changer and mega improvement in part because it’s tube-driven and I can take it in my carry on onto a plane.

Despite my newest gear, you can’t remove all the variables from night to night. I just had a nightmare in Brazil in using an expensive Shure wireless guitar system. It sounded horrible until I managed to borrow a Line 6 G50. That cleared up the problem. The whole wireless thing can be disastrous, from sound issues to cutting out issues. Then there are the in-ear monitor issues I’ve been struggling with. Your signal goes through so many variables; from the type of mic to the length of the cable, the signal needs to travel to get to the desk and back to your ears, to whatever variables are in the mixing desk. It’s frustrating at best. I do a lot of solo multimedia shows and usually, really enjoy the sound of the guitar, but when you add all the myriad of frequencies in a band, your own frequencies suffer. I don’t have the answer.

I don’t know why the industry
has been such a boy’s club
for so long.

Usually these days my practice is whatever project is ahead, whether it’s a recording or a show or a tour. I typically use the Transcribe! App which allows me to slow down parts, loop anything, change keys, change EQ, or remove the vocal or lead instrument. I’ll loop any section I have trouble with and attack it. I almost always will save looped soloing sections no matter how simple the harmony, and get used to soloing at that certain tempo and groove.

Jump in. Now’s the time. Thirty years ago, when I joined Michael Jackson, the industry was not friendly to females for the most part. But it’s changed radically, especially in the last five to ten years with more and more women being seen online. That encourages other women to jump in. Laura Whitmore is also someone doing a hell of a lot to shine a light on women’s accomplishments in all aspects of the music industry, with her many showcases and her annual She Rocks Awards during the NAMM show. I don’t know why the industry has been such a boy’s club for so long. It’s been acceptable for women to be singer-songwriters and acoustic guitar strummers, but outside of that, the numbers drop radically.