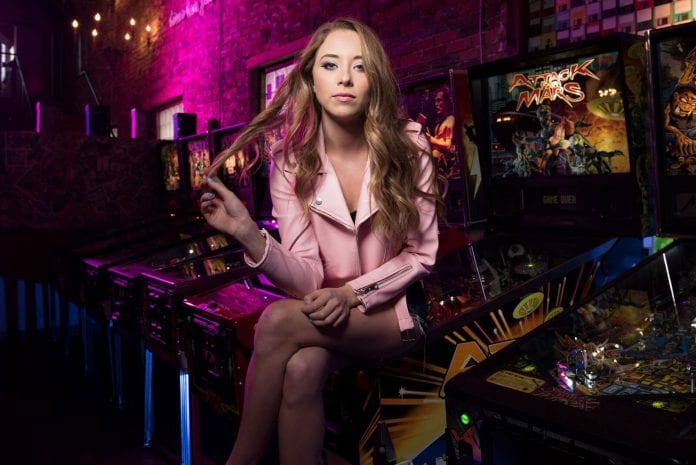 Nashville country artist Kalie Shorr has made it her mission to seek gender equality in country music. Through her weekly live show Song Suffragettes, she pulls together a group of all-female singer-songwriters who help support each other.

Earlier this year, Shorr was featured on PBS Newshour and NPR where she discussed the movement of female country music stars to gain more radio airplay. She, along with friend and country music artist Savannah Keyes, champion the “Let The Girls Play” Radio Disney channel.

Originally from Maine, Shorr relocated to Nashville when she was 19 years old to pursue a career in music. Her debut single “Fight Like A Girl” garnered the attention of The Highway, a SiriusXM radio station.

We met up with Shorr at CMA Fest to find out what she’s been up to lately.

We’re here at CMA Fest where I got a chance to catch your performance and the Song Suffragettes showcases. We had the pleasure of interviewing you at last year’s CMA Fest, so I just wanted to catch up and see what you’ve been up to.

I did a lot of touring last year. I did a tour called “The Road to the CMA Awards” tour. It was put on by Pepsi, Lays, and the CMA to get people across the nation excited for the Country Music Awards. It was really fun. We ended up having like 30 shows in 31 days, or something like that. I mean, it was absolutely crazy. It went from as far east as South Carolina to as far west as Oklahoma.

I also started working on my album, which I’m about to finish. I’m really, really pumped about that. It’s 13 songs and my first ever full length. It’s my debut record. I’m just really excited about it. I played some of the guitars on the record, and I’m producing, so that’s really cool.

You recording here in Nashville?

So basically, my producer and I, Skip Black, talked about getting back to basics. I’ve done the whole thing with the big shiny, polished, very grandiose recordings. These songs are just so personal and so raw and real that I felt like I just wanted to be in a safe space. So we just locked ourselves in his little one-room studio. Everyone who played on the record is either a member of my live band or a member of Song Suffragettes. So, it’s been really cool to see just how in-the-family it is.

I was able to catch the Song Suffragettes performance yesterday. I love that you’re so involved with it, and it’s a group of women supporting women.

It was fun. I played “Your Man” and “The One.” “The One” is like a breakup song, and “Your Man” is sort of like a jam. Yes, I’m very, very proud of my work there and to see it grow. It’s been five and a half years since we started, and it’s really become this whole thing. It’s really awesome.

So I ran across your segment with PBS Newshour and NPR about women in country music.

Yeah, that was amazing! NPR is so vocal and supportive of women in country music. I’ve done a lot with them, and we ended up being on PBS NewsHour with the Song Suffragettes talking about the song “Time Up.” We talked about my music, the Song Suffragettes, my career trajectory, and then just the community in general. And then from there, NPR had seen the PBS NewsHour special and then they covered it. We did a segment with Kelleigh Bannen and Beverly Keel [Change the Conversation], and we took calls from listeners and opened up the conversation. There were some people who called who really didn’t share the opinion that there was a problem with women in country. It was kind of fun to get to shut them down on live radio.

From looking at the performance schedules here at CMA Fest this year, I feel like there have been more women involved.

Yeah. This is actually, in the grand scheme of festivals, one of the most balanced, I would say. And that’s definitely safe to say, especially on the daytime stages, you see the very equal women to men ratio.

How about Joan Jett performing with Carrie Underwood last night?

Amazing. I love Joan Jett. She’s really cool and she’s doing a record with Wanda Jackson that they’ve been talking about. I’m a huge fan of female rock stars. I’m all about it.

So who are some of your big inspirations?

I grew up on so much country and ‘90s rock. So, I would say probably my two biggest, let’s say three biggest because I think it’s kinda a lovely blend of all of them, but it’s this spectrum of the country side of music with the Dixie Chicks to Michelle Branch and Alanis Morissette. My songs kind of operate on that little spectrum. I’ve always loved all of them. I’ve been covering “Ironic” at my live shows this week, and it’s been really fun. I’m a huge Alanis Morissette fan.

What guitars are you currently playing?

I have a Fender endorsement, so I play two different Telecasters. I have one that’s part of the American Professional Series with double humbuckers, and then I have a Deluxe Tele that’s sonic gray. It’s a really beautiful color that they had during the original issue of Fender guitars in the ‘50s. So, they had this sample that they never used until this series came out about two, three years ago. It’s got the double humbuckers and a Strat neck, and this beautiful blueish gray color —everywhere I go, people are like “Oh my God, what is that guitar?” I named her Mary Anne after the Dixie Chicks song “Goodbye Earl.” Then Wanda’s my pedalboard.

For acoustic, I play a really big bodied Taylor that’s a 716ce Sunburst Mahogany. It’s the deepest, warmest Taylor you’ve ever heard in your life. I’m very, very lucky with all three of these guitars for sure. I also just recently got a Laney endorsement.

I’ve also had the opportunity with Fender to go into their office and play their new Acoustasonic a few months before it came out. I was like “This is the coolest thing ever.” It’s wild because you go from this little parlor sound all the way to this giant Tele noise. It’s so cool.

It’s a hybrid between an acoustic and an electric guitar, right?

Well, the first three sounds of the guitar are, one is a little brighter, then you have a deeper mahogany acoustic sound, and then you have a little parlor, like a baby Taylor kind of sound. The fourth switch is the Strat sound. It starts on a kind of very clean Strat, and then you get to more like a John Maher kind of Strat. Then the last sound is a Tele, and you can do a clean Tele or one with some dirt on it. Technically, there’s like 10 full guitar sounds. For full band shows where I’m flying and can only bring one guitar, it’s like every guitar you need.

So, what’s next for Kalie Shorr?

Just producing the album and playing some new shows. I got to play the new music for the first time this week. It was so exciting to see how the fans reacted. So, I’m just falling in love with the songs all over again and getting to go out and bond with the people. I’m really excited.

Any words of wisdom you would like to offer to a young girl wanting to pick up the guitar and play.

Well, honestly, I wish someone would have told me that an electric is easier to learn on. I think that the reason a lot of little girls don’t play electric is they don’t see a lot of girls playing them. But, fortunately, I found Orianthi pretty soon into my guitar playing years. She’s actually moving to Nashville, so I’ve got like one or two degrees of separation. I wanna meet her. I love her so much. When I first saw her shredding, I was like “oh, I can do that.” It took me a minute to kind of get around to having the confidence to do that on stage, but now I’ll play a solo on the lead line and stuff. It just feels good. So, I think that the more little girls pick up an electric guitar, the more representation we will have. I love seeing Lindsay Ell and I hear people say “oh, yeah, she’s one of the best female guitarists in country music.” I’m like, “I think she is the best [female guitarist in country music] and also I think she’s just one of the best guitarists in country music.”