Kate Schutt was just getting her music career off the ground when she learned that her mother had ovarian cancer. She would become her mom’s primary caregiver for almost five years until she passed away in 2015. During that period, Kate wrote several songs to deal with the roller coaster of emotions she was feeling. What resulted was thirteen songs that would become her new album, Bright Nowhere, set to drop on April 30th, the week before Mother’s Day.

Bright Nowhere album was produced by 6x GRAMMY Award nominee, 2x Emmy Award-winning producer/arranger Rob Mounsey, who calls the album “a work of artistry and humanity, full of thought, humor and heart, and above all deep sincerity.”

We’re premiering a new single from the album tomorrow, so be sure and check back in to hear this exciting new song. 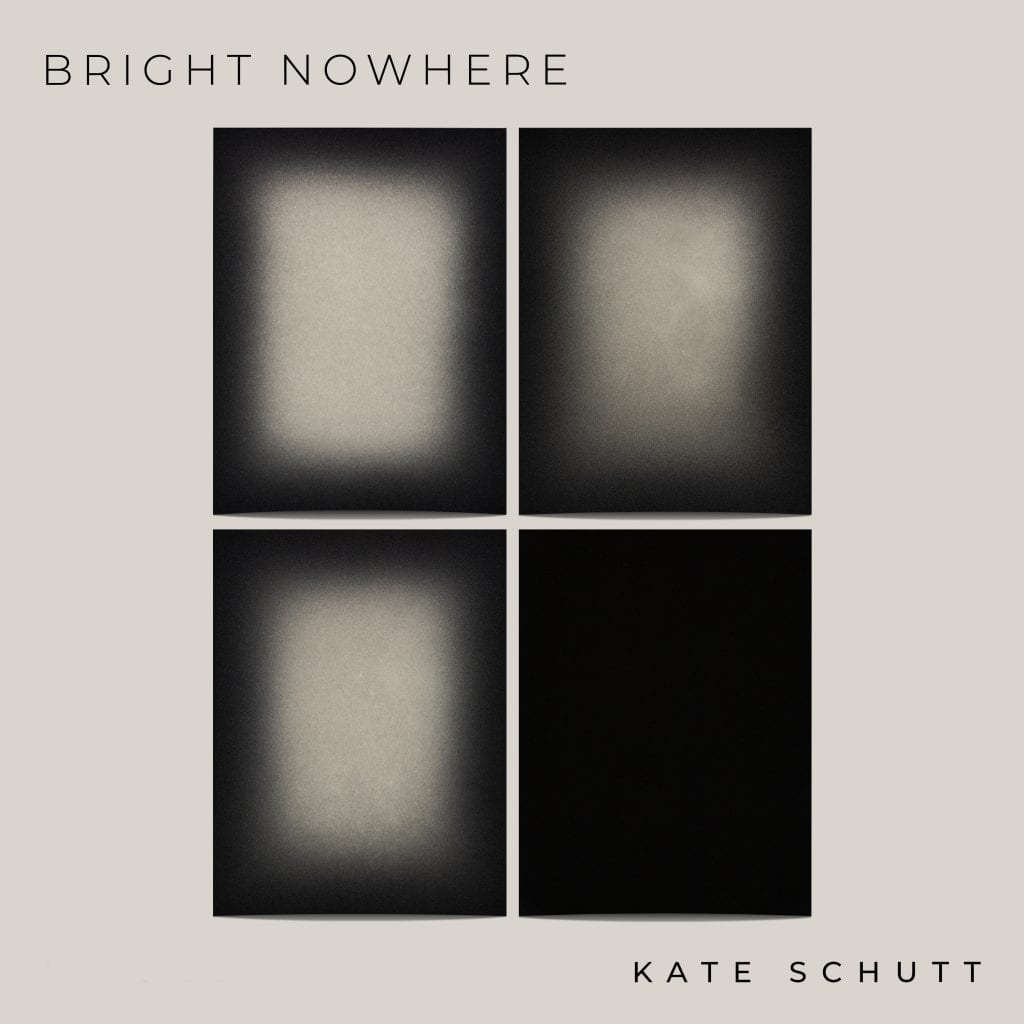 You have a new album releasing in April called Bright Nowhere. We know it was written during a difficult time in your life. Can you tell us a little more about your new music and how writing during that time helped you?

Bright Nowhere is an album of unsparingly honest pop songs that speak to connection, loss, living, and dying. It tells the story of my mom’s diagnosis of and death from ovarian cancer. I was her primary caregiver; I put down my guitar and music career, and I moved home to see her through to the end of her life.

I used lyrics and melodies to transform our unutterable grief into something shareable, sing-along-able. The music is candid and compassionate, heart-wrenching and, miraculously, life-affirming.

The album’s title comes from a poem of Seamus Heaney’s called “Clearances.” It’s one of eight sonnets dedicated to the Nobel Prize-winning Irish poet’s relationship with his mother.

Do you have a favorite part of the song/album, maybe a song or lyric? And what did the writing process look like?

The songs I’m most proud of? Two come to mind.

First, the song “Mothers.” I wrote it after my mom died, and in it, I tried to capture that curious way in which we take our mothers for granted. It’s only later in life (and then only if we’re lucky in a million different ways) that we start to see them as individuals, with unique hopes and dreams for their lives.

The song “Mothers” is one in which I think I captured that sense of what an enigma a mother can be, with her interior life going on alongside the life in which she enacts motherhood. Moms contain multitudes, like we all do, and this song captures that sense of the fullness of who they are.

The song that was one of the hardest to write was “You More Than Me.” In it, I’m trying to capture that moment when my mom got her terrible, world-shattering diagnosis and how, as much as I could be there with her and empathize with her, I wasn’t the one who had to live out this death sentence. I’m traversing and troubling the boundaries of empathy.  She would have to walk this road alone, ultimately. For me, that truth was hard to bear.

How did you first get started in music? Was there a particular moment when you knew you wanted to pursue music as a career?

I started playing piano when I was eleven. I wasn’t given a choice. I had two older brothers, and they escaped without having to take lessons on an instrument, but my parents insisted that I learn to play something. Piano it was! I picked up guitar soon after that. From the very beginning, I was always in bands: rock bands, acoustic duos, you name it. I added bass about a decade ago. Now, I’m working on my harmonica chops.

Making music that gets released and performed in public is something I love to challenge myself to do. I love the entire learning process. I love playing the infinite game of music. Writing timeless, melodic songs is particularly hard and thus rewarding. I try to write songs my heroes would like to listen to or sing. But I’m not sure, even now, if I want to pursue music as a career. It’s just what I’m doing. It’s who I am being.

Really what I am doing is trying to become the best version of myself. I want to be a good human, a good citizen, a good fighter for social justice, a good lover, a good sister, a good friend. And by “good” I mean honest, present, making an impact. Sometimes all of that looks like me making music and sometimes it looks like me doing other things—listening, protesting, painting, coaching, backpacking, reading, writing, meditating, fundraising, etc.

My musical influences include Ella Fitzgerald, Sarah Vaughan, Aretha Franklin, and Tina Turner. They include my guitar teacher from when I was twelve years old, John Dougherty. In short, my influences include anything that I am deeply intrigued or fascinated by. I love the songwriting of Cole Porter; I’m always trying to write a song that sounds like a lost Cole Porter song. Of course, I listen to music being made today. One has to do that! Currently, I’m in a deliberate practice class with a dozen classical musicians, so I’m returning to the deep, deep well of that music.

My goal is to write songs that are timeless. My heroes in all art forms did that—the great painters, the great writers, the great playwrights. They all created some body of work that was timeless. Put it this way: I’m trying to write a song that moves you deeply and, if you happen to be an artist yourself, makes you say, “Damn! I wish I’d written that!”

My advice is to stop using the words “music industry.”

To me, it’s important to take committed actions to create the world you want to live in. Words create worlds. I am careful not to use words that reinforce ideas and ways of being that are anathema to me (and other humans).

Moving on… Focus on becoming the best version of yourself. Become the most unconditionally loving towards yourself and, when you are able to do that, you will become unconditionally loving to others and the planet. Push yourself and take risks, but don’t do it for the outcome and all that you’ll “get”: the accolades, the recognition, the hype. All of that stuff is always and eventually hollow.

Find your inner fire and fall in love with making music because it’s a way you express yourself. You have to love it for it and love you for you. Do it because it’s how you live out your love and how you keep that inner flame flickering and flaring during the brief time you are lucky enough to be alive.

What’s next is what’s now: doing the work to become a better version of myself in every single moment. Turning my attention away from comparison and outcome-oriented thinking and towards what can I do in this here now that lights me up. How can I be more present in my own life, for my partner, for my friends and family, for the causes that I care about? How else can I grow? What else can I say no to so that I can say yes to what my heart is longing for. That’s what’s next.

On a very gritty level, what’s next is that my dad has just started hospice care. He has Parkinson’s disease and is approaching his death. My days are filled with caring for him and showing up for my family. Part of that means I’ll be playing the music from Bright Nowhere to him as a way to ease his mind and his passage to the other side. Doing so is another step towards my mission of changing the conversation (or lack thereof) around death and dying in our culture.