The LA-based indie post-rock trio Gypsum recently released their new single “Follow Me,” off their self-titled debut album that has been seven years in the making scheduled to drop on October 12, 2021, via Sonic Ritual. The band members are Sapphire Jewel (guitar/vocals), Anna Arboles (guitar/vocals), and Jessy Reed (percussion).

A press released described the track as “a lustrous, percussion-driven indie-rock tune that guitarist and vocalist Sapphire Jewell says was inspired by the people throughout history who have been forced to leave their home and seek refuge. ‘It’s not about any one movement but rather the constant stream of innocent people who’ve chosen between starting a new life elsewhere or risking their lives to stay. It’s sort of a privilege check and that security isn’t permanent.'”

The band fills us in on their new music.

What inspired your new album?

Sapphire:  We’ve held onto these songs for years and were waiting for the right moment to record them all. It’s something we’d wanted to do for a while, but one day the pieces came together, and the process was set in motion.

Tell us about the writing and recording process.

Sapphire:  Gypsum songs tend to be a collaboration of everyone in the band. For many of the songs, one member would bring in a riff or an idea, and we’d build the rest of the song around it, but some of the songs arose entirely out of jamming and improvising together. I think it’s special that no songs are created the same way with this band.

How would you describe your music?

Anna:  I think if you enjoy good melodies, lots of harmonies, and tons of vibey guitar vibes with dense chords and extensions, this music is for you. There’s definitely a lot of musical heavy lifting behind our songs, but I think we have packaged them in a way that is listenable and not pedantic.

How did the trio form?

Sapphire:  We met in college and started playing music together when we discovered that we had similar interests and tastes in music

Your band name has a unique meaning. Share with us what inspired the name.

When and why did you get involved in music?

Anna:  I’ve been playing guitar since I was about 10, but I got into music as a pop culture thing more during my teen years. One of my best friends had an older sister who was cool, and I felt like I was constantly trying to keep up with their musical knowledge and tastes. I was the oldest child, so I had to chart my own pop-culture adventure. I still have all the mix CDs my friend and I used to exchange—very important artifacts to me. That kind of started my musical education and put me in the habit of putting in the time to find good music. It also started my large CD collections, haha.

Jessy:  I have been into music for as long as I can remember. My parents loved listening to music, but I also had friends whose older siblings helped expose me to various kinds of cool music in the early days of my music discovery before I figured out ways to seek it out on my own! I started playing piano in first grade, and by the time I hit fourth or fifth grade, I was obsessed with going to my friend’s house whose older brother had a drum kit set up. By middle school, I was allowed to get my own drum kit, keep it in the garage, and take lessons from a very inspiring teacher who also pushed me to delve into classical percussion as well. I have always loved playing music in various settings, seeking out new interesting music to listen to for fun, and sharing all of it back and forth with friends. The movies and TV shows I watched growing up also played a factor in fueling my interest in music in various capacities.

When and what inspired you to pick up the guitar?

Sapphire:  I was probably in sixth grade when my best friend asked if I would take guitar lessons with her. We would sit in the same lesson together and learn a little bit of guitar but mostly goof around the whole time. I ended up really taking to the guitar, and she quit after only a couple of months. After that, I taught myself for a while and got really into Death Cab for Cutie, José González, and The Shins. I mostly liked creating my own guitar parts, even though I didn’t play with anyone else. I enjoyed that more than learning covers and other people’s creations. It was magical to make something that I’d never heard before and to know that it was mine! I didn’t take learning that seriously until I went to Sasquatch Music Festival in Washington State and heard so many incredible bands that I decided it was what I needed to do for the rest of my life. I can’t remember what inspired me to really start playing, but I remember a lot of the experiences that made me want to keep playing.

Anna:  My mom was always playing her guitar when I was young, so I always thought it was the coolest thing. It’s just been the thing that has always stuck with me.

Sapphire:  I tend to write on whatever guitar I’m playing the most at the time. A lot of the Gypsum album was written on my Gibson ES 355. I love that guitar but almost never play it anymore. Now I tend to write on my Fender Jazzmaster because that’s what I’m always using for shows and rehearsals.

Anna:  My PRS Hollowbody Spruce has always been my go-to for this band and still is. It’s such a nice-sounding instrument; it’s a pleasure to write on, and it’s built like a tank, so it can withstand whatever gigging I do with it. So easy to play.

Sapphire:  Each member tried to create the best ideas they could to serve these songs. I hope that love and attention to detail comes through.

Anna:  Well, after this interview, I’m probably going to think about what’s for lunch. 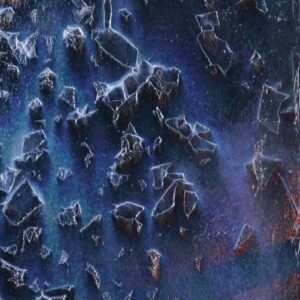 Gypsum formed as a weekly jam session in 2014 as a way for them to “have a safe space to drop the ego that was ever-present in music school,” remembers Jewell. After a band field trip to the L.A. Natural History Museum, the band pulled their name from a mineral that takes both functional and vibrational forms (desert rose crystal, drywall) – this idea aligned with the possibilities of the project, which takes its members outside of insular writing and into an ecstatic commitment to the songs and one another.

Featuring all three members on backing vocals, Jewell and Arboles’ voices blend with atomic affinity, rich alto leads encircled by hazily imploring harmony stacks. Reed, whose interest in Brazillian polyrhythms and Latin percussion inflect her performance, navigates twisting song structures with otherworldly fills. The guitarists’ lifelong love of riot grrl and grunge inform the dynamic builds of their intricate fretwork. As a group, Gypsum cites influences as diverse as punk, prog, jazz, and psychedelia and takes inspiration from genre-hopping jazz and punk acts like Hiatus Kaiyote, DIIV, and Foals. If it sounds like a science experiment, its three members view it that way, too.

About the album from the press release:

Gypsum was tracked over fourteen days at Station House Studio with engineer Mark Rains (Tanya Tucker, Alice Bag), a studio chosen for its relaxed energy so the band could focus on self-producing. Reed used a hodgepodge of kits ranging from the 1930s to present, swapping out toms regularly and changing snare tunings to accommodate her “sounds and vision” for each track. Jewell, who knowingly laughs “I don’t like dry tones,” assembled an arsenal of subtle delay and reverb pedals to drench her angular riffs, adding saturated dimensions to post-rock that might otherwise skew aggressive. Knotty intersections between Arboles’ and Jewell’s guitars, sometimes layered to the double-digits, are the result of each consulting on the others’ tone, exemplary of Gypsum’s egalitarianism. Arboles, who took over bass duties for this record, also experimented with a vintage Echoplex tape delay, creating wall-of-sound feedback loops on “Grafting” to shake up its organic timbres, and producing strange vocal swirls and rewound cymbal psychedelia on “Margaret,” a spoken-word groove inspired by a Joan Didion essay.

Not all sonic experimentation stuck—Korg synths and Roland pads were scrapped—but the trust required to turn these corners together, even if they’re dead ends, is part of Gypsum’s extraordinariness. From the icy swirling post punk of “Gull Lake” to the reverb drenched, dark indie pop of “Kaleidoscope”, Gypsum is a deeply rewarding listen dense with mystery, complexity, darkness, majesty and beauty.

After seven years, the group members’ admiration for one another has not waned, after all, the band states, “In Gypsum, the whole is greater than the sum of its parts.” The Gypsum interior artwork (featuring a long exposure, pinhole solargraph taken by drummer Jessy Reed) is “a nod to the way in which the band has moved slowly over time to create this complete work,” Reed says.