Home Interviews Lisa Parade of No Small Children: Rocking After the Bell Rings 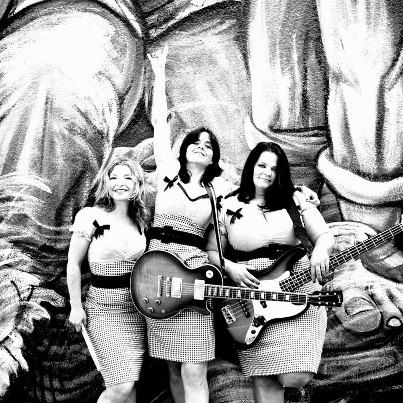 What began as an imaginary idea between a couple of schoolteachers has evolved into a full-fledged female band that rocks after the bell rings. No Small Children [NSC], featuring guitarist-singer Lisa Parade, bassist Joanie Pimentel, and drummer Nicola B., deliver a sound that has already made them one of the fastest-rocking, fastest-rising bands in the Los Angeles area. Some would think it’s not easy teaching students by day and being a rock band by night, but thus far, No Small Children have had no problem figuring out how to handle both.

I recently asked Lisa about doing this kind of double duty, as well as a few other topics like her take on a certain movie that combined rock with school, their latest music video shoot and some songs they’ll be releasing soon.

GGM:  For my opening question, Lisa, when did you first learn how to play guitar?

Lisa:  I started playing guitar about ten years ago. I played drums/sax in all my bands before that, but as a songwriter, singer, teacher and producer, I felt that not knowing how to play the guitar was affecting my freedom as a musician. I started playing it to accompany myself in an acoustic “singer-songwriter kind of way” at first. I played a bunch of coffee houses, got a band, played a ton of gigs and then switched over to electric when we started NSC. Now I play my Les Paul in a definitely not so “singer-song-writer kind of way.” As it stands, learning how to play the guitar was one of the most liberating things I have ever done.

GGM:  Where was your first professional performance as a musician, and what was that first-time experience like?

Lisa:  The first time I played my guitar professionally, I had all kinds of nerves, and when you have all kinds of nerves, you get “flustery” and “rushy.” The gig went well, but it took me some time to get a handle on the gear and all that comes with it…set up, tuning, pedals, tone, cables, tempos…  The first gig we had with NSC was at The Guitar Merchant in Canoga Park, CA. The tempos to most of our songs are fast, but that night, they were really, really, really fast. Haha…but we had so much fun.

I grew up playing marching snare drum in an Italian processional band called The Roma Band of Boston. We played all the fests in Boston in the summers and we also played lots of parades. I guess that was officially my first professional gig …that band was a trip…I learned a lot.

GGM: How did you meet Nicola and Joanie to form No Small Children?

Lisa:  All three of us are schoolteachers at the same school. Nicola and I had been working together for about nine years when we started the band, hypothetically at first. We gave the band a name, thought about outfits, started writing songs and rehearsing until we were ready for a bass player.  It just so happened that Joanie was moving from Boston to LA around the time that we were ready for her. She didn’t play bass, but played cello and sang. Even though cello is tuned in 5ths and bass is tuned in 4ths, I knew she could pick up the bass in no time, and she did. She worked her butt off, too. We have been on fast forward ever since. Also, she started working at our school this school year. Joanie is my sister by the way.

GGM:  Are any of the three of you still teaching and, if so, how do you manage your time between teaching school and being in a rock band?

Lisa:  We are all teaching still. During summer “vacation,” Nicola went to Columbia (in NY) for a 6-week masters program, and Joanie and I ran a summer arts program here in LA called The Exploratorium, which is part of LA’s Academy of Creative Education. Joanie and I did local unplugged shows while Nicola was away. She came home on July 13th and we played a show…two actually…on the same night…one at the Redwood and one at El Coritas. We have played like 65-70 shows since January…and many of them on weekdays. We are often pretty tired but find the love of the music to be energizing, which in turn makes us better teachers. Kind of like being in love I guess (barf). Being teachers is a big part of who we are.

GGM:  Do any of you teach, or have taught, music in school, or just normal subjects in the vein of math, science, English or history?

Lisa:  We teach elementary school. Nicola teaches 4th grade and Joanie and I teach music. Orchestra, Jazz Band, Pep Band, Chorus. I am also an administrator. I used to be a [high school] band director in Randolph, Massachusetts before my band HEIDI got signed to Warner Brothers and we moved to LA.

GGM:  A decade ago, there was this movie entitled The School of Rock, starring Jack Black, and featuring a young Miranda Cosgrove, later of Nickelodeon’s iCarly, as one of the students.  Have you ever seen that movie, either in the theater or on video, and, given what it was about, what’s your take on it?

Lisa:  Wow, was that a decade ago??  I think Jack Black is the man!!! I loved that movie….a romantic version of what it is really like, of course, but who doesn’t love a good romance?

GGM:  What guitars do you currently play?

Lisa:  I play a Gibson Les Paul Standard, pretty much exclusively. I love the sound of it through my rig and I love the feel of it under my fingers. I use very heavy strings played through a Lone Wolf Amp and Marshall 1960B 4 by 12. I’m working on my pedals. I recently won “The John Lennon Song Writing Contest” and the Grand Prize was a whole bunch of gear,  including a bunch of pedals….I ordered them last week and this will be my new exploration for NSC.

GGM:  For your video of “Might Get Up Slow,” you played out your teaching roles rather nicely.  You’ve since shot another video, so what song would that be for, and how much fun was it compared to “Might Get Up Slow”?

Lisa:  Making the video for “Might Get up Slow” was so-o-o-o-o-o much fun and pulled on all of our creative juices (which is probably why it was so much fun). It was created with a very low budget by a very talented film student. His name is Clint-Khile Bragger.

We have a song called “Drunk Creepy Guy” that we have been playing live for about 3-4 months. David Berlinsky came up with a concept for a video, directed it and is in the process of editing it. Like “Might Get Up Slow,” it is a comedy, but for this video we had actors, hair and make-up, dream scenes and a lot more people involved. We did two full days of shooting…one at a bar called Silly’s in Winnetka, CA and one at Green Screen Studio. It was incredibly fun to tape and I cannot WAIT for you to see it!!!

GGM:  Finally, since you’ve been working on your first full-fledged album, how did you pick Bob Marlette to help mix it, and when will we expect it to be released?

Lisa:  We recorded drums for 10 songs before Nicola left for New York. We will be releasing the songs as we finish them, one at a time. We are planning to have another EP with five songs on it by the beginning of our east coast tour in August. We thought about this a lot and decided that we didn’t want to wait to release a full length LP. It takes too long and we want to keep moving. As far as Bob Marlette, I have special connection with him….he is my husband…so it seemed like an obvious choice…haha. But seriously, Bob is an incredible producer, engineer and mixer, and he has been totally supportive of us from the very beginning.

I can’t predict whether the women of No Small Children will give up the value and prestige that comes with teaching for the rock star life, but I do think they’ll continue doing what they do best, as both teachers and band members.