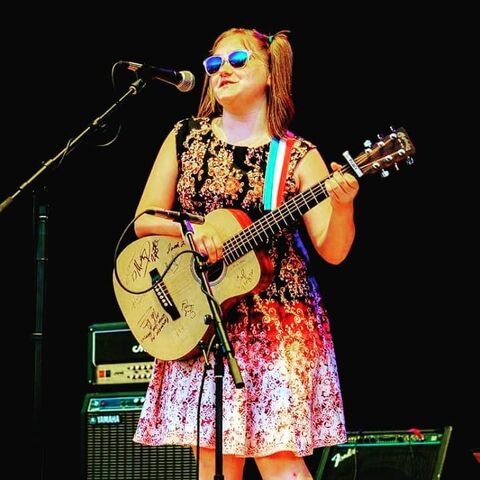 Ruby Leigh Pearson, Lit’l Miss Country, is a young singer and guitarist from Missouri. Although it is impressive that she is performing at only 11 years old, what is really impressive is the success that she has achieved despite only starting her second year as a musician. According to friends and family, Ruby just started singing one day and impressed many around her. When someone in Nashville heard one of Ruby’s very first videos she posted, they sent it to George Gruhn of Gruhn Guitars and said this little girl needs a guitar like yesterday. George Gruhn watched the video and agreed and set everything in motion. She received her first instrument, an LXM Little Martin Guitar, which led to her learning to play guitar in a very short period and receiving many endorsements. Ruby often performs traditional country and covers of classic country songs by artists like Loretta Lynn and Hank Williams. 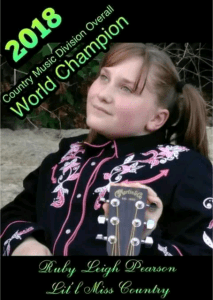 Since beginning her career just over a year ago, Ruby has taken advantage of the opportunity to perform with and for many notable musicians. She has played with George Portz and the Friends of Bluegrass, Mickey Gilley, Johnny Lee, Rhonda Vincent, Tony Jackson, and opened the show for the Ozark Mountain Daredevils. She performed at her first competition, an open competition karaoke contest held by St. Louis Cardinals pitcher Adam Wainwright, where she sang acapella all the way to the finals.

She was hand selected by Dr. Dale Smith and signatured in by him to represent her home state of Missouri in the national finals of the American Kids National Championships, where she won two gold medals, a silver medal, and an additional national gold medal for a performance above and beyond the expectations of all the judges. She also won a Crystal Vase for Finesse, and a Crystal Star for Best Dressed.

About performing, Ruby says, “I love performing; it makes me feel so good when I see people smiling and enjoying my music.” 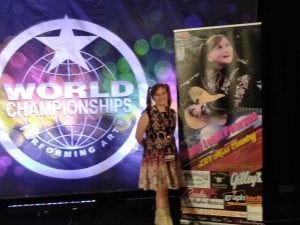 The young performer also has proven herself in several other competitions. Ruby Leigh Pearson is the 2018 Country Music Division Overall World Champion in the World Championships of Performing Arts (WCOPA), considered the Olympics of performing arts. She won gold in country music and silver in gospel when she competed against 64 other countries at the event in California. She also won the Loretta Lynn So You Think You Can Sing Competition and the Dolly Parton Mountain Soul Vocal Competition.

Ruby shared her excitement with us about performing at WCOPA: “Being hand selected to represent the USA is such a huge honor by itself, but to bring back the Overall World Championship title to the USA is amazing! I’m so glad that everyone had enough faith in me to do this. I would have never dreamed I would be a world champion at anything; heck, I really didn’t know I could even sing just a year ago!”

In her year and a half of playing, Ruby has received many deals and endorsements from brands. Her first endorsement was from Roadie Tuners, whom she represented at the NAMM show in Anaheim. She also works with Martin Guitar, Graph Tech Guitar Labs, Vocalz VU, Guitar Socks, Optima Strings, Fishman Music, CNZ Audio, Zither Music Co., and CAD Audio. Recently, D’Angelico presented Ruby with a Bob Weir SS electric guitar.

Ruby says of her endorsements, “I’m very proud to work with what I feel are the very best companies in the music business. I have turned down some endorsers because I did not feel I could be honest about their products and that would not be good for me or them. It’s not about how many; it’s about where your heart is and how you truly feel about the product, and it’s a commitment from both of us to make it good for each other.”

The young artist is also getting recognition in music publications. In 2017, Ruby Leigh Pearson was named one of the top 15 unsigned artists in the world by Fair Play Country Music Magazine.

Ruby is not slowing down. She has even more success planned for the future. She has been invited to play with Mickey Gilley (one of Ruby’s biggest fans) again for the sixth time. She was also nominated for the Junior Artist of the Year award as part of the 2018 Josie Music Awards. And, look for Ruby’s appearance on the WoodSongs Old-Time Radio Hour soon.

Ruby Leigh Pearson has accomplished a lot for her young age in only one and a half years, and the future looks promising for her, especially if she continues to learn her craft and book appearances and competitions with the tenacity she has already shown. Ruby says, “I am so lucky that God has given me such an amazing gift. I will let God open the doors like he has been doing so far and let him lift me even higher than I could ever dream to fly on my own!”