Home Interviews Meet the Sisterhood of Musicians behind Lockdown Sessions 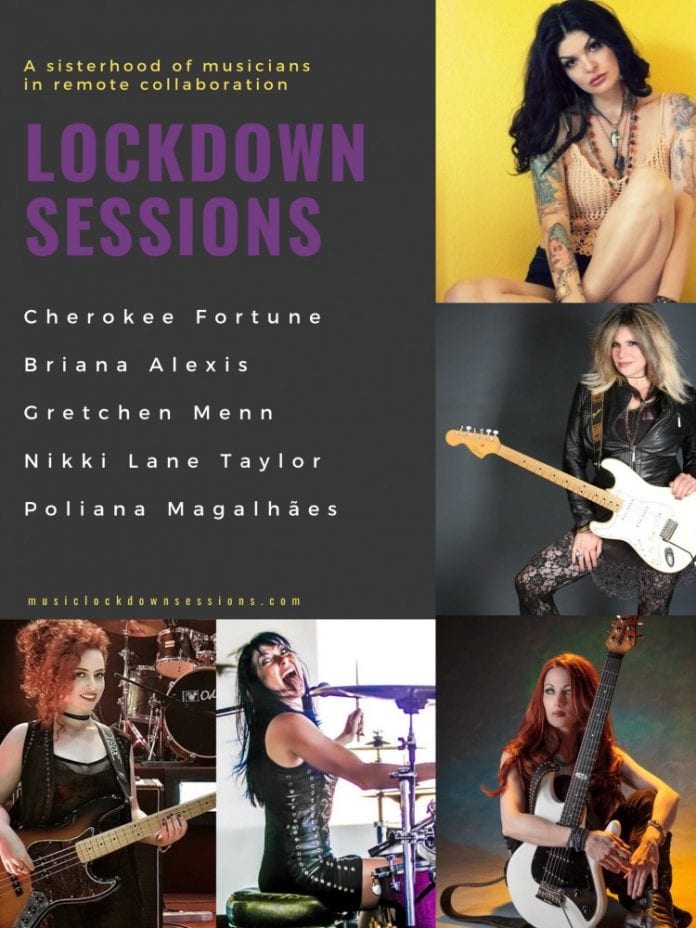 On August 20, 2020, we held a Facebook Livestream Event chatting with the musicians behind Lockdown Sessions to hear more about their background in music, how the collaboration was formed, how they chose to cover Jeff Beck’s version of “Rollin’ and Tumblin’,” and so much more.

For those who missed the live event, check it out here!

Meet our host and guests:

Guitar Gabby
“Guitar Gabby” is an Atlanta Native and proud graduate of Spelman College and Vermont Law School. Her background in environmental and music law fueled her desire to start and manage the international all-women touring collective, TxLips Band, LLC. Logan believes it is important for artists to be well rounded and versed in many areas of the music business, thus inspiring women worldwide to be an unstoppable force. She is also the host of our Facebook Livestream event featuring women of color in the music industry, so be sure and check her out.

Cherokee Fortune – Vocals
Vocalist Cherokee Fortune comes from a long line of professional musicians. Growing up she was surrounded by music and began singing at age five. As a result, she acquired a wide range of musical influences that have helped her develop her own style. Cherokee is a seasoned performer, having fronted bands in London, New York City, and Los Angeles. Cherokee has also released several solo projects heavily driven by blues, country, rock, and slide guitar. We hear there are more to come.

Briana Alexis – Guitar
Briana Alexis began her career early on during the hair metal days, playing in bands on the Sunset Strip.  She moonlighted during the day while learning the business of music manufacturers for Randall Amplifiers, Fender Musical Instruments, and Gibson Guitars.  Briana is an alumni of the Dick Grove Music Academy and majored in jazz studies.  Her musical genres include classic rock, jazz, and blues.  She is the founder of the all-female rock band Absinthe, where she began her collaboration with singer Cherokee Fortune.  Briana is an educator and clinician and has appeared in ads for guitar magazines.  In 2015 she founded her own production company, Southpaw Music Group, where she records music for TV and film.

Gretchen Menn – Guitar
Gretchen Menn received her BA in music from Smith College, where she studied classical guitar with Phillip de Fremery. In addition to her original, instrumental work, she is guitarist of Zepparella, the Led Zeppelin powerhouse. She is also an educator, having recently authored How Music Works, which was published by Stringletter Media, and taught in the online guitar camp, Guitar Cloud Symposium, with Jennifer Batten, Nili Brosh, and Vicki Genfan. Menn released her first solo album Hale Souls in 2011, followed by Abandon All Hope in 2016, and is currently working on her next release for late 2020.

Poliana Magalhães – Bass
Brazilian native Poliana Magalhães brings in the bass. Her style of music ranges between Funk, Rock, R&B, Brazilian Popular Music – MPB, pop, gospel, and Persian music. She was the resident bass player for the Late Show “Adnight Show” in Brazil and has recorded and toured with many artists from Brazil, Europe, USA, and Persia. She is currently working on her first album and also spends her time teaching.

Nikki Lane Taylor – Drums
Rounding out the band is drummer Nikki Lane Taylor aka “The Nikster.” Growing up in a musical family with a recording studio in their house, Taylor was exposed to music at an early age. Her father, Mel Taylor, is a graduate of Berklee School of Music and one of her earliest musical influences. A wide variety of instruments surrounded her, but drums stole her heart. The ambidextrous drummer has played with the likes of The Delphines, the pop-punk band fronted by Kathy Valentine of the Go-Go’s, as well as Kevin Martin & The Hiwatts. She is currently working with Randy Rhoads’ brother, Kelle Rhoads, the Iron Maiden tribute band, Maiden USA, and the Soundgarden tribute band, Black Daze.

Watch the video of Rollin’ and Tumblin’

And be sure and visit our sponsor FU-Tone at https://www.fu-tone.com