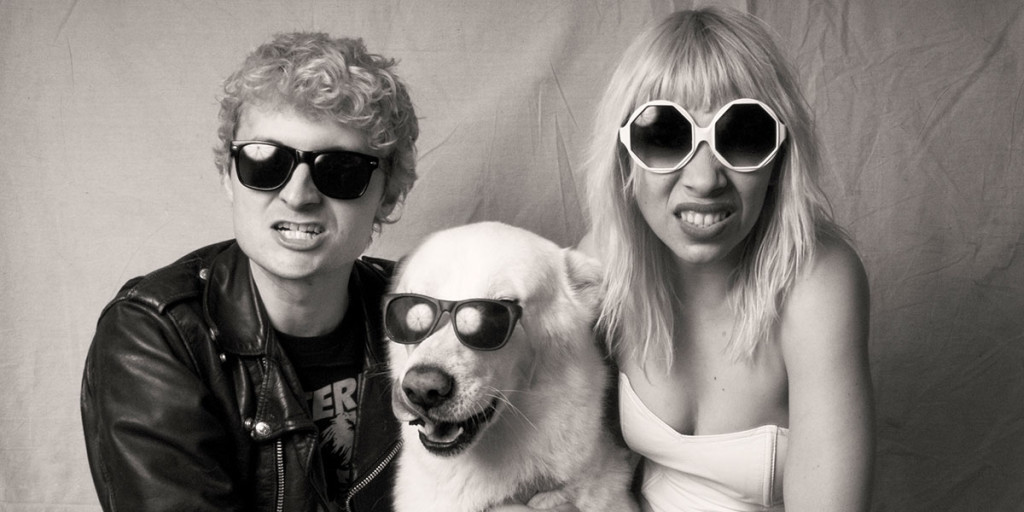 The Ghost Wolves is a husband and wife duo out of Austin, Texas comprised of Carley Wolf on vocals and guitar with husband Jonny on drums. The duo was formed in 2010 and has been making get strides on the music scene with their eclectic performances, relentless international touring, and collaborations on art and fashion.

Their latest album Man, Woman, Beast was recorded last year at Arlyn Studios in Austin, TX, produced by Gordie Johnson, Ben Richardson and the band, was released late last year via Nashville’s Plowboy Records, and contains 13 tracks of punk-infused rock and roll blues. The band has dubbed their music as “stomp n’ roll” which they describe as a variety of American styles – blues, rock ‘n’ roll, and swamp-boogie ‘a la Bo Diddley.

Man, Woman, Beast follows Getchya Hip Thrust (2012) and In Ya Neck (2011). The Ghost Wolves’ music has been played on several Oxygen shows including Bad Girl’s Club, Funny Girls and Best Ink, as well as the TV series Shameless and MTV’s Real World: Explosion. Japan is a also a huge fan of Carley and Jonny, as one of their songs was chosen for a trailer for a Japanese martial arts film titled Why don’t You Play in Hell? and the Japanese cult fashion line, Hysteric Glamour, carried The Ghost Wolves’ clothing in their stores for the 2014-2015 winter season.

A multi-instrumentalist, Carley plays the piano and drums, as well as several stringed instruments- guitar (electric, acoustic and classical), mandolin, fiddle and the upright bass. Not only a trained musician, Carley also has a degree in Sound Recording Technology and conducts clinics and workshops on songwriting, music and sound engineering.

Carley has recently received endorsements from Silvertone Guitars and Eminence Speakers which she can now add to her collection of her signature one-string 1960s Teisco and her 1965 Harmony Silhouette.

And, when not focusing on music, she raises wolves!  Learn more about this very talented, interesting artist and her music, inspirations, gear, and more.

We started the band about four and a half years ago. The name came from our 15 year old male alpha wolfdog’s death, which came just as we were forming. We wanted to carry on his legacy and after having a supernatural experience with his spirit, we had no other choice but to name the band The Ghost Wolves.

You’re music has been described as “stomp n’ roll.” Can you tell us how you got involved in music and describe your music for us?

I have been into music since I was a child, surrounded by musical instruments and singing. My parents had me in dance and music classes starting at age three and I fell in love with the stage and performing. It’s always been a part of my life, starting my first band in middle school and growing into different projects from there. Having gone through genres ranging from country and rock-a-billy, to classical guitar and jazz, I have reached the mix of blues and rock and roll that is The Ghost Wolves. In this band I switch between an electric six string guitar that I play with a slide and a one string guitar, Jonny plays drums and keys and we both sing. We call it stomp and roll.

A multi-instrumentalist, can you tell us what instruments you play, when you began playing music, and more about your education – as you also have a degree in sound technology?

I started on piano and then acoustic guitar as a child. In college I studied sound recording technology and classical guitar performance. I also started playing mandolin, banjo, and upright bass on my own while I was in college and was in a couple bands playing those instruments. I put all of that down when I started playing electric guitar though. After I graduated I sold my classical guitar and bought an amp and Jonny and I started the band. From there I have changed my guitars, amps, speakers, and pedals several times, experimenting with different sounds. It continues to be a growing and learning process and will continue to evolve. I recently started playing a reissue Silvertone 1478 and Eminence Speakers.

I understand you have a one string ‘60s Teisco and a ’65 Harmony Silhouette. Tell us about those unique instruments.

The Teisco was a wedding present from a dear friend of ours. He left it on our front porch one morning and texted us telling us to go look behind the bushes. There we discovered a beat up six string 1960s guitar with only one string on it and a beautiful inscription on back he had written about love. We were touched by the thoughtful gift and hung it on the wall to admire it. A few days later we were jamming and we both looked at it and said, “I wonder if that thing actually makes noise?” I plugged it in and we immediately wrote a song on it and have been writing with it ever since. I haven’t even considered putting anymore strings on it, we love the simplicity of it.

The Silhouette I picked up at my favorite guitar shop in Austin, Austin Vintage Guitars. It has DeArmond pickups which are the gold foil ones that they made in the 1960s. Those things sound so gnarly.

Who were your musical influences and was there any one person or band that changed your world?

Lucinda Williams, Ronnie Dawson, Loretta Lynn, and The Runaways were big influences on me as a kid. My mom and Aunt turned me onto a lot of music I otherwise would not have heard. Tom Waits has always been a hero of mine since the first time my aunt showed me his music when I was in middle school. When Jonny and I started this project we were listening to RL Burnside and The Cramps.

How do you and Jonny approach the writing process and how are your songs inspired?

When we are off the road we leave our instruments set up so we can play at any given time. Often we will just be jamming and making stuff up and one of us will say,”Cool! Do that again!” and that’s the beginning of a song. Sometimes one of us will come to a rehearsal with a sketch of a song and we will develop it together. We co-write everything and trust each other enough that we are open to the others suggestions.

We are inspired by life experiences and all the crazy people in our family and that we meet. We are inspired by bands we play with and by artists of all kinds. We soak up a lot when we are on tour and don’t have much time to write on the road, so when we get home we process it all and songs come out.

The Ghost Wolves have done some very unique performances and have even been described as “wild.” Tell us about your latest music Man, Woman, Beast.

Man, Woman, Beast is our debut full length album and was recorded in Austin at Arlyn Studios. I would rather people just go on and listen to it than go into great detail talking about it. Plowboy Records out of Nashville released it. You can get it from them at www.plowboyrecords.com or get it on iTunes, or better yet, get it from us at one of our shows!

You recently played at SXSW in your home. Can you share with our readers that haven’t had the opportunity of attending the event the vibe in Austin during SXSW?

Austin is a madhouse during SXSW in March. We love it though. It is such an exciting time to be in Austin. Music industry people, performers, and lovers of music come in from all over the world to experience the madness. There are bands playing all over the city at any given time of the day or night. You meet so many people and see so many amazing acts it’s insane. That is the best way I can describe it. As chaotic as it is with the traffic and crowds, I recommend it to anyone who loves music. Many people may not realize that you don’t need an official wristband or credentials of any kind to enjoy it. There are free shows all over the city during the day and at night you can get tickets at the door of the venue you want to attend.

You’re on tour now. What can fans expect to hear?

We will be playing a lot of new songs on this tour. We have been writing all winter and will be road testing the new tunes. We plan to record later this year, so we are preparing for that. It is tempting to record new songs right away, but it works better for us to take them on the road first to make sure nothing changes after playing them for a month. We often make small adjustments on the arrangements and lyrics to tighten things up while on tour. That way when we go into the studio we can get them down in a take or two. We will also be playing some songs off of Man, Woman, Beast.

Besides performing, you also teach and perform clinics and workshops. What’s the best piece of advice you would give to a young aspiring artist?

Write. Just stick with it, if it is what you love, spend time with it. Keep writing, keep playing, get involved with a community, go to open mics, play with other people. Put your heart into it and don’t give up. Don’t let other people get you down. Write. Write. Write.

What’s next for Carley and Jonny Wolf and The Ghost Wolves?

We will get back from this tour in May and will continue with preproduction and plans for the next record. We have dates in the states through the end of the year as well as a tour in Europe in the fall. We will also be working more on our clothing line and music videos.

The top 3 songs on my playlist RIGHT NOW are: “Alice” by Tom Waits; “Ugly Boy” by Die Antwoord; “Same Mistakes” by The Happen Ins
If I could perform with anyone it would be: Jonny, and The Cramps
My favorite song I’ve performed is:  My newest song, whatever it is at the time.
One thing people don’t know about me: I secretly play banjo!
In one word, music to me is: Gung ho

For more on Carley and Jonny Wolf and The Ghost Wolves, visit their site HERE.