Home Interviews Music and Matrimony: An Interview with Amanda Hamers 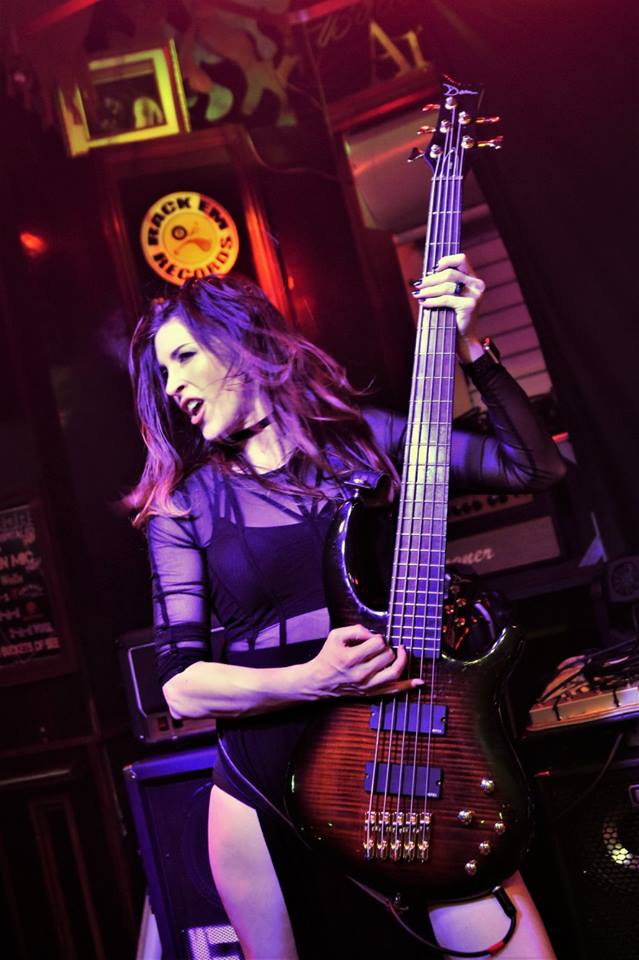 Amanda Hamers is a bass player and vocalist who writes, performs, and records in the three-piece rock band Sunshine & Bullets. Last year, she got married during a music video on stage in front of a live audience of fans, friends, and family with her now husband and bandmate, Rich Keane, Jr. We checked in with her to hear what’s new with the band and the new couple.

We first interviewed you back in 2014 after discovering Sunshine & Bullets on “The Bubba The Love Sponge Show” when you got to play a live show. Tell us about that experience.

I have to admit—I was a bit nervous for that one! I was familiar with Bubba’s reputation and show personality, so I knew that I didn’t know what to expect! It turns out he’s really cool in person off the air, and we had a great time! We still listen to Bubba every morning. It’s one of our favorite shows.

How did Sunshine & Bullets come to be?

We started in 2010 and went through a few changes, but Rich Keane, Jr., has always been on vocals and guitar, and I have always been on vocals but switched from bass to guitar and then back to bass. We started as a three-piece, but experimented all the way up to being a five-piece at one time! Our fifth member was an on-stage lighting guy-slash-hype-man. Right now, we’re back to being a three-piece, and we have a different drummer, Matty Exile. He is also an amazing singer, writer, and guitar player.

Was there always a romantic connection between you and Rich?

The truth isn’t as exciting as the rumors. Rich and I were friends before the band, and we became best friends over the years, though we did fight a lot! Yes, it is possible for a man and a woman to be best friends without a romantic relationship. We were both in other committed relationships, and unfortunately those relationships didn’t work out. When we were both single, we started spending even more time together. I didn’t quite realize it at the time, but we were starting to go on dates. I ended up telling him I didn’t want to date a musician, but that I’d think about it. It was actually right after the Bubba show that I told him, “OK, let’s give it a shot.” We haven’t fought since. 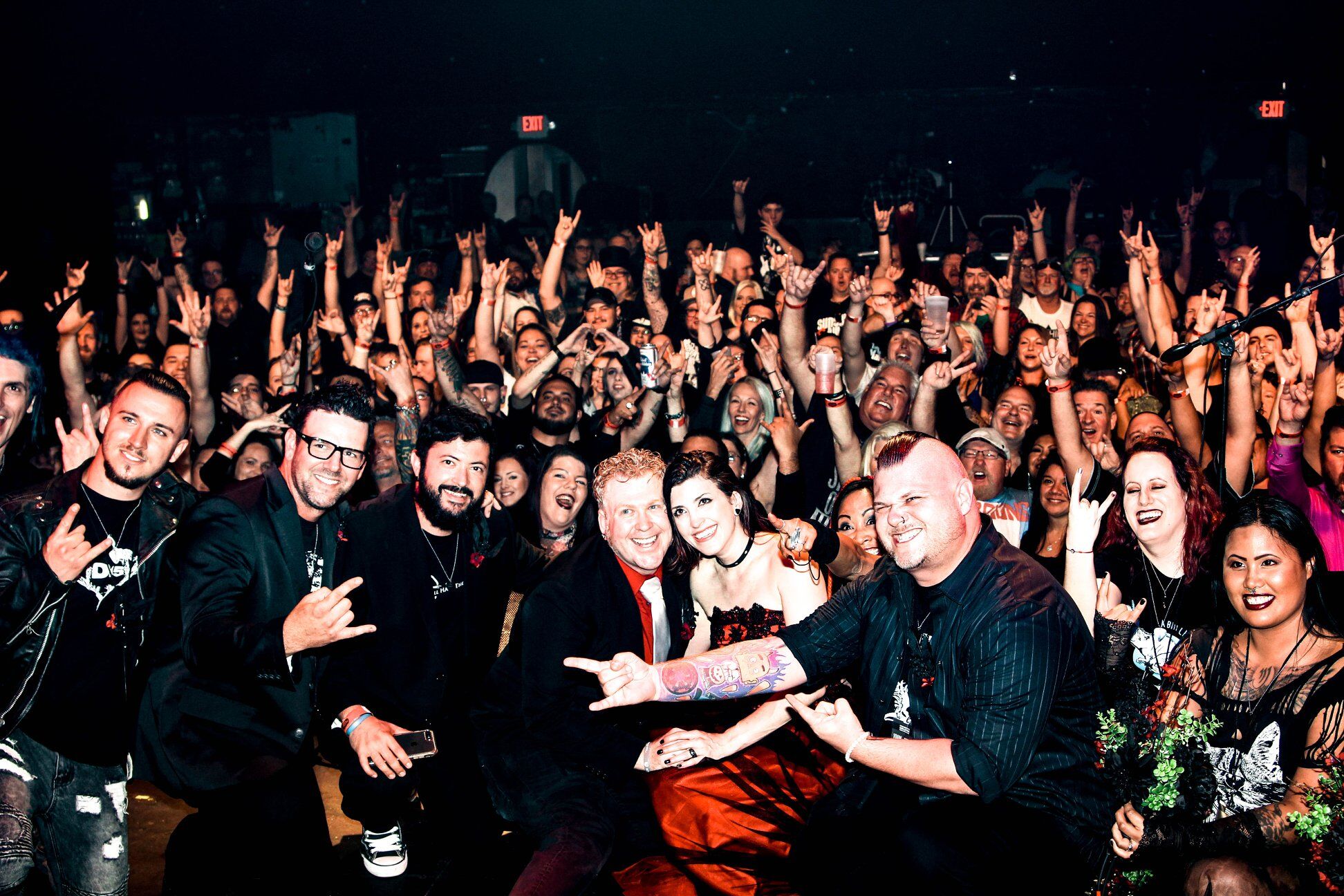 I believe you even got married on stage during a live performance?

What a dream! I was never the type to fantasize about a wedding as a young girl, but this was better than anything I could have imagined! We wrote a love song for each other (our only true love song in the band) and made our wedding into a music video shoot. The wedding invitation was a (free) concert ticket. We filmed it with our good friend and awesome videographer Christian Cousin, and our musician buddies were in our wedding party. I wore a red and black dress and held it at an iconic music venue in Saint Petersburg, Fla., The State Theatre. It’s a historic 1924 building that holds a lot of memories for Rich and me as friends, best friends, bandmates, and now as husband and wife.

Now, let’s talk about music. What’s your journey been like?

I was born in New Orleans, and my mother said I loved listening to the local jazz musicians from the womb. Like Rich, my parents picked up on my enthusiasm for music and encouraged me to play guitar. I thought that if I could play “Purple Haze” on guitar, then I could do anything. So that’s the only thing I practiced! Later, I started writing my own stuff. It wasn’t until I met Rich that he noticed I played guitar like a bass, and he let me borrow his Ibanez five-string. I fell in love! I still tinker with guitar here and there, but deep down I’m a bass player

Who are your favorite female role models in the music industry today?

There are more now than ever, but I think that until we have enough diversity to not think about whether a role model is female or of another race, then we can’t say we’re there yet. I admire many female artists such as Joan Jett, Sia, Lady Gaga, Beyoncé, Madonna, Chrissie Hynde, Mariah Carey, Taylor Swift, Pink. For bass specifically, I appreciate Tal Wilkenfeld and Carol Kaye.

How do you define tone?

I like to think of tone as a character—you want the right actor for your part. For example, I used to have an acoustic fretless bass that had a tone I imagined was a jazzy tenor female singing in a smoky nightclub. For my current setup, I think of it as a powerhouse diva who has a raspy grit when she belts it out, but a soft, sweet side that’s also really expressive (when I use the clean channel).

What gear are you currently using?

I have two Dean Edge Pro five-string basses. I call them my twins because they’re identical, except one is red and the other is black. Each is detuned half a step, but one is standard and the other is in G#. I got rid of all my amps, and now I play direct through my beloved Darkglass B7K Ultra to the house PA system for live gigs. For recording, I use a Kemper, and it’s awesome for finding great bass tones! As for accessories, I switch between hands and custom-made Sinister guitar picks—they’re little black heart picks that we got for our wedding! I dig my NYXL bass strings, and I have a few comfy and cool looking Levy’s straps. I store my gear in Gator bags and cases. (Disclosure: I work in the industry for two of the brands I mentioned, but I love them all!)

Does your gear change between recording and live performances?

I change only from the Darkglass to the Kemper. Every once in a while, I’ll try a different pedal or bass for a different pickup selection as long as it serves the song well.

What advice do you have for young girls pursuing music?

Some people will tell you that you’re a goddess just because you’re a female in the music industry, and others will criticize every move you make. Surround yourself with those rare few who will be honest with you about what you can rock out on really well, but help you where you need it. I would tell girls to make sure to be honest to themselves, too. The industry can be fickle, but if you can find that balance between diva and shoegazer, you can weather any storm.

What’s next for Sunshine & Bullets?

We’ve been gigging really heavily for the past few years, so it’s time to focus on writing. We will release our love song and wedding video soon and will be writing more music after that. Rich and I always have ideas brewing in the background.