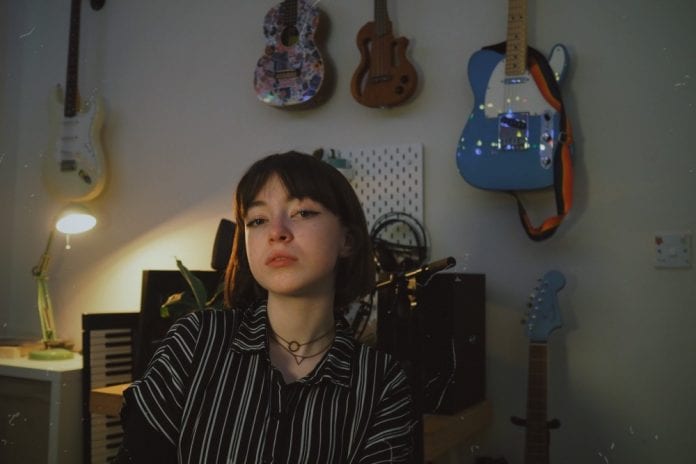 Dublin singer and guitarist Patricia Lalor released her new single “Self Aware” today from her forthcoming EP Do It Again set to drop on July 24. “Self Aware” follows the release of another track from the EP titled “Alone.”

At only fourteen years old, Lalor is wise beyond her years with her ability in songwriting and her beautiful vocals. She is definitely one to watch in the alt-pop scene.

Lalor filled us in via email on the inspiration behind “Self-Aware” and what fans can expect from her new EP. She also talks about her approach to songwriting and her beloved guitars.

“Self Aware” is your new single which dropped today. What inspired the song?
‘Self Aware’ was inspired by me wishing I was more outgoing in music, and in real life, I guess. While I was writing it, I was just feelin a LIL down about myself. I feel like everyone has those moments, and when I had that moment, I wrote a dramatic song about it. Not mad though, a semi-good song came out of it!

The single is from your upcoming EP Do It Again, releasing July 24. What can fans expect?
I would expect something completely different from the last EP Sleep Talk. This song and this EP, in general, is a lot more dark than Sleep Talk. I’m kinda experimenting with sounds as one does, and I feel like anyone who really, really liked Sleep Talk would not like Do It Again as much, and that’s fine because again, I’m experimenting and learning and all that stuff. Not everyone can like everything, but Do It Again has a lot more of an experimental sound to it.

How and when did you get involved in music?
Well, I would like to think it all started because of my mom and her love for music, there was always good music playing in the house or in the car when I was little. That’s definitely influenced me, but my music journey probably properly started when I was around ten and joined guitar lessons for the lols. There was no intention to “start my music career,” I was just doing it for fun. The singing and writing kind of just slowly came along with learning guitar, and it was all really just a thing I did cause I enjoyed it and still do.

How do songs come to you? Do you have a specific writing routine or sessions, or spur of the moment ideas?
Right now, I don’t really have a proper writing process. Sometimes I find nice chords and write lyrics to them. Sometimes I think of lyrics without any melody, write them down in my notes, and then put chords to them, so there’s a bunch of different ways I write right now, and I’m using all of them, it’s great!

What was it about the guitar that attracted you to the instrument?
I started playing guitar when I was like ten, so it was really just a random after school thing I did for fun. I was just a kid with an instrument, and I still am, but I definitely see more beauty in the guitar now that I’m a tad bit older. I see how fortunate I am to have learned how to play it at a young age and how it’s just ingrained in me, and it’s easy to play. I especially saw that when I started to learn how to play the keyboard and was completely terrible at it. I was like, ‘Ohhh, I’m not just good at everything. I have to practiccceee!” Who knew? But I love playing guitar so, so much—it’s got a LIL space in my heart.

Speaking of instruments, what brands do you play, and why?
Right now, I only play Fender guitars because that’s all I have, but I one hundred would love to try more. I do love my Fenders, though. I have a Telecaster and a Stratocaster, and I love them both equally, like they are my children.

What guitars and equipment do you use while recording, and do you use anything different when performing live?
To be honest, I’m not sure. I’m really new into this equipment world, especially since I started with just a guitar and an amp, and suddenly there’s all this other stuff that I should know about but don’t. A lot of music people have told me that I will get better and become like obsessed with gear and know everything about it like they have, but I just can’t see myself becoming obsessed just because I’m so oblivious with this equipment. Who knows, maybe one day I’ll become an expert with my gear, but for now, I’m just cruising along focusing on the music side.

Who are some of your female role models?
I love this question. My biggest female role model that comes to mind straight away is Elena Tonra. She is the singer in the band Daughter but also does her solo stuff under the name Ex:Re, and I love all of her stuff—she is so powerful, and you can hear it in her music. Also, she gives me a good ol’ cry listening to some of her sad songs like ‘Smother.’ A few others are women like Emily Sprague (she sings and plays in a band called Florist, and her words are so beautiful, and so is her music, she’s incredible), Lila Ramani (she’s the lead in a band called Crumb, I’m obsessed with Crumb, such a vibe,) and Victoria Legrand (she’s the singer behind Beach House, her voice is beautiful and unique, and she makes really dreamy music with this other dude Alex Scally).

What music are you listening to today?
I’m listening to a lot of Radiohead, Zero 7, Florist, Broken Social Scene, Bon Iver, Beach House, Crumb, and Ariel Pink. Those are probably some of the main people I’ve been listening to, and I would recommend, especially Zero 7. I need someone to talk to about Zero 7, so I can talk about how amazing they are, so hit me up if you listen to them, haha!

The effects of the pandemic affected so many, and with the cancellation of live shows, what are you doing to stay connected with fans and to continue to write and record?
I’m going to try and post more regularly on YouTube (aiming for every Thursday, but we will see about that). It seems like everyone loves the covers and I love making the covers, so I feel like it’s a good way to connect. I’m also really active on Instagram, posting small snippets of what I’m writing or doing LIL q&a’s is also really fun for me, so I will continue doing that as well! Basically, just continue what I’ve been doing for fun and hope people connect! 🙂