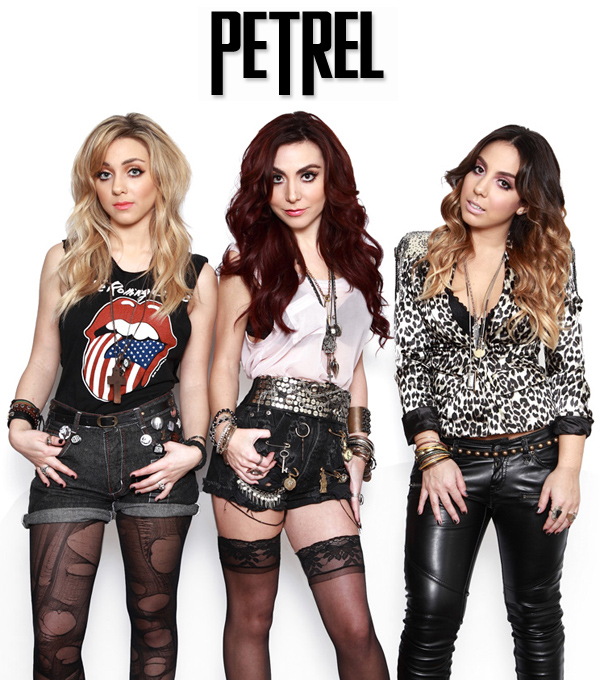 The Los Angeles-based, sister-fronted pop-rock band Petrel has to be one of the hottest acts going.  Though they are transitioning into young adulthood, the Long Island-born Petrel sisters–singer Jess, keyboardist Bekah, and guitarist Destiny–have already proven themselves through many live shows, as well as given back through helping youth in some of the Western Hemisphere’s poorest regions.

And, as reported here on this site over a week ago, Petrel are currently on tour with singer-actor Aaron Carter, the younger brother of Nick Carter from the Backstreet Boys.

Recently, I asked the Petrel sisters about how they landed this big tour, as well as other topics like their years performing live together, their diverse array of influences, their humanitarian efforts, and what their take is on having success that’s worthy of being in the Rock & Roll Hall of Fame.

My first question is for all three of you.  Like many singers such as Aretha Franklin and Katy Perry, you started singing in church.  What was it like when you went from that to playing clubs in New York City?

Petrel: Playing in clubs in NYC was a different crowd.  When we played in church we were playing every week to pretty much the same group of people. Felt like family.  When we played shows in the village, we were all underage at the time playing grungy rock clubs filled with people that were older than us, that were oftentimes drunk, that were people we didn’t know.  It was good for us.

What musicians, Christian and/or secular, have influenced each or all of you, and how would you describe your sound?

Petrel: As musicians, singers and songwriters, we have been influenced by so many artists.

Bekah: I was influenced by the R&B vibe of Alicia Keys and gospel flow of Israel Houghton. I really sunk my teeth into soulful music.

Destiny: I was influenced by John Mayer and was into a lot of alternative rock bands like Paramore. Our sound is “pop rock” like the candy.

My next question is for Destiny.  When did you start learning how to play the guitar?

Destiny: I picked up the guitar when I was twelve years old.  I took to it instantly and never put it down. I remember spending the whole summer in my room learning songs. It sounds cliché but I really ate, drank and slept guitar. I still do.

Following up on that, Destiny, your guitar playing earned great words from Daisy Rock founder Tish Ciravolo last year.  How did you get the endorsement from Daisy Rock?

Destiny: I was introduced to Daisy Rock Guitars at a NAMM show in California last year.  I remember walking by the Daisy Rock display and I freaked out! There were all these glittery acoustic and electric guitars that looked like they were made specifically for females. I was not only impressed with the look and feel of the guitars, but I was inspired by their vision. They’re really big on empowering girls and I love that!

Any of you can answer this next one, and it’s about touring.  You were on a KidzBop tour back in 2008, and you’ve also played Disneyland, a Bloomingdale’s store in New York City, and even a few NBA games.  Would the Warped Tour, or a festival like Lollapalooza, Coachella or Bonnaroo, be an eventual goal for you?

Petrel: We love touring, love playing shows! We love interacting with people and making new friends on the road! Any one of those festivals would be cool to play.  There’s nothing like playing outside in the open air during the summer time.  We had a good taste of that back on the Kidzbop tour. Music festivals are like one giant party.  Speaking of parties, we are about to hit the road with Aaron Carter on “The After Party Tour.” We’ll be opening for him for 21 dates. Can’t wait!

And speaking of whom, how did Aaron Carter’s people select you for “The After Party Tour 2013”?

Petrel: We met Aaron 3 years ago on an airplane, and let’s just say we hit it off.  He’s a lot of fun, great personality. Fast forward, he just wrapped an amazing run on the off Broadway show “The Fantasticks.”  He reached out to us inviting us to join “The After-Party Tour.” With a tour title like that, who would pass it up?

The three of you have also shown your humanitarian side by helping out, as well as entertain, impoverished youth in Mexico and Haiti. Since you’ve played those two countries a few times already, has your popularity continued to grow there with each visit?

Petrel: To be completely honest with you, when visiting any 3rd-world country, it’s never about increasing our popularity, but it’s more about us being able to give back. We have a special place in our heart for the children, and although they have grown to love us and count the months when we will return again, our reward is putting smiles on their faces!

Perhaps the most notable and successful sister-fronted band has been Heart, with Ann & Nancy Wilson, who are about to be inducted into the Rock & Roll Hall of Fame.  But while a Hall-of-Fame-type music career is what any act can strive for, do you think it’s that important?

Petrel: Any great artists, like Heart, should be acknowledged for their amazing career.  We were happy to hear that’s happening for them this year. I think every artist’s goal is to leave a legacy.  Well, it’s one of ours. I mean… it’s cool to think that after you pass away, your music can live on and reach generations you can’t. Being recognized by the Rock & Roll Hall Of Fame is making history. That’s dope.

You all did some very good dramatic acting in the opening scene of your “Bombshell” video before the song itself kicks in.  Would that necessarily mean any of you are going to be actors in addition to already being singers/musicians?

Petrel: Well, thanks!  None of us have really thought about it. We like to entertain people, so maybe one day.

Finally, will we be expecting a new album or other projects from you later this year?

Petrel: We are excited to announce the release of our EP during our tour with Aaron Carter.  It’s entitled “The Heart Truth” and drops February 26th. Right now, our single “Bombshell” is available on iTunes.  Also, we have a few original songs on www.youtube.com/petrelsisters.

“The After-Party Tour 2013,” with Petrel opening for Aaron Carter, continues right up until April 6 at the Key Club in Los Angeles. You can find out which cities Petrel will be playing in, as well as get ticket information, by visiting www.petrelmusic.com