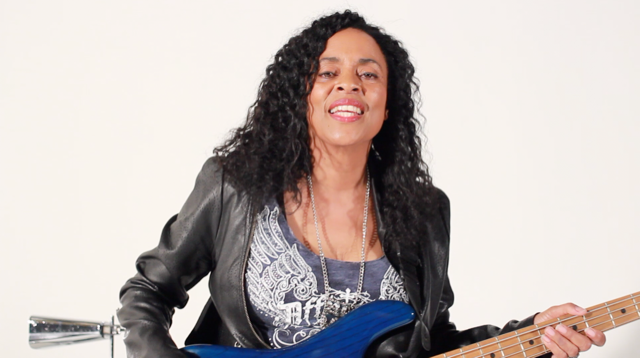 Nicknamed “Fenderella,” Joyce Irby is best known for her work with the all-female band Klymaxx, formed in 1979 in Los Angeles. She was also part of George Clinton’s P-Funk collective in the ‘70s. Throughout her career, she has been an instrumentalist, producer, songwriter, and singer. Irby has recently been back in the studio creating new music and working on her memoir, I’d Still Say Yes. From this memoir, she shares about her background in music and how she started playing bass. Enjoy these excerpts from her book, used with permission from Irby and her publisher.

“…I used to sing with a hairbrush in the mirror. And I begged my mom for a guitar, and she got me a real one when I was about 12. I couldn’t make my hands hold chords properly, but I would pick the bass notes out on the lower strings of the guitar.” She recalls talking her father into buying her a real bass guitar and says, “It was a black Fender Jazz Bass. I played and taught myself while dealing with the customary prize of swollen hands and blisters for a while. I also picked up trumpet and played tenor sax in the Reid Ross High School Stage Band.”

“By the time I got to my senior year in high school, my dad got me a car, a Mustang, which I did not appreciate nearly enough because it did not have power steering. I decided to start driving all over a three-state area, usually alone, to attend concerts by popular groups like Earth, Wind & Fire, Graham Central Station, The Ohio Players, Parliament Funkadelic, Rufus and Chaka Khan, Bootsy Collins, Gladys Knight, Al Green, New Birth, O’Jays, the Brothers Johnson, LaBelle, KC and The Sunshine Band, The Jackson 5, and more.

When it comes to major influences in her life, Irby credits George Clinton. In her memoir, she devotes a section to him titled, “Make My Funk the G Funk!” She writes, “George Clinton has been a primary force in my life for decades. He has been a mentor, a good friend, and a musical father figure. He always made time for me, even in the midst of every crazy thing he had to deal with throughout his career. He was always complementary, and just cool. I feel like he saw something in me, and that’s what I’d hoped.”

Irby got the nickname “Fenderella” from another bass player in North Carolina. “I was so crazy about getting my dream bass, a black Fender Jazz Bass, but somebody broke into my apartment and stole it after ‘I Miss You’ was a big hit. I never replaced it. I’m probably the only bass player who relentlessly promoted the Fender brand and never got anything from Fender. Even in all my writing and production credits on our hits, I used only the name ‘Fenderella.’”

Irby writes the best parts of being successful can be found in the little things. “You know you are a success when you can buy whatever you want to eat! Seriously, that is how I measured it. Probably the coolest thing is that musicians you have admired for years may now know who you are without you having to explain. I’ve had this experience so many times! Even 30 years after the fact, I still meet people I admire who also admire me. It is humbling and a blessing.” She adds, however, that it’s important to stay humble. “One of the worst things is, you start to think you are so special because people tell you that. It usually comes from people who admire what you do, but they don’t know you on the inside. This can be confusing and dangerous depending on how you perceive yourself. I think it happens to everybody at some point.”

Irby has pursued music for years because she loves it, and that is the advice she shares with young women getting into the industry. “Passion is the only reason to do anything. Trust yourself first, but be open to suggestions and criticism—it usually comes with good intentions. Understand that this is a business and sometimes you won’t get paid, but if you pay attention to the right people, you may get an education you can’t pay for. Share your gift with others. There are so many kids that can play me under the table right now, and I am always encouraged and get excited when I see a young lady playing any instrument—but especially bass!”

These days, Irby is back to writing and recording for herself after spending years supporting young artists and producers in Atlanta. “I miss the love exchange from live audiences, so I’m also doing some performing with my Atlanta-based version of Klymaxx. I’ve got some great female musicians I work with and I love it.”