Home Interviews Susana Prieto: The Female Half of Duo Melis 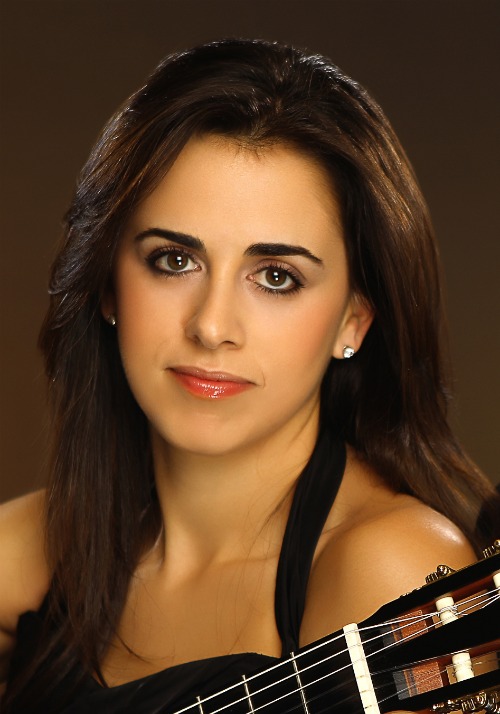 For this holiday season, we at Guitar Girl Magazine would like to change the pace a bit and feature an interview with a woman from the world of classical guitar.

Susana Prieto was born in Spain, a country whose guitar history goes back to about the 15th century.  In addition to being a talented classical guitar player on her own, Susana is just as famous worldwide as the female half of a classical guitar pairing known as Duo Melis, the male half of which is Greek native Alexis Muzurakis.  Since they began as a Duo in 1999, they have played in concert halls worldwide, offering a style that Mark Switzer of Soundboard described after their performance at the 2008 Guitar Foundation of the Americas Convention as “technically superb [and] musically convincing”.  Over the last few years, Susana and Alexis have also taught at the National Conservatory in Strasbourg, France.  They have also been in great demand for master classes at various conventions.

I recently asked Susana about how she evolved into the guitarist she is, and how Duo Melis got started, as well as other topics like their experiences in competitions and with symphony orchestras, their teaching of not just the music they play but the business behind it, and how they inspired a fellow guitarist to dedicate a composition to them.

Steve: First, Susana, how did you learn classical guitar, and what have been your influences?

Susana: I liked classical music from an early age and the guitar was a very close instrument for me, because growing up in Spain gave me the chance to listen to Andres Segovia playing on the National TV very often. As a young guitar student, I had the great opportunity of listening to David Russell playing live and it was a magical experience that convinced me of the beauty of this instrument.

Steve: How did you meet up with Alexis to form Duo Melis?

Susana: We first met at a guitar festival in the Canary Islands, where he was with his former duo partner to play a recital and I was a participant of the international guitar competition. We became a couple then and we were together for three years before making the decision to play as Duo Melis.

Steve: Of all the competition awards Duo Melis have won, either together or individually, have any one or more of those stood out from the others?

Susana: Every competition was really special and I can remember each one with the same emotion. If I had to choose one, perhaps the first competition we won as a Duo in Germany in 1999. We were already thinking for some time to play together, so we decided to prepare for the competition and see how we like the experience. We had a nice time preparing the repertoire, even though we only had three months to do so, and won the first prize. That encouraged us to continue playing together and was the beginning of our career as Duo Melis.

Steve: As mentioned on your website, Polish guitarist Marek Pasieczny dedicated a concerto that he composed to you and Alexis; you have, so to say, returned that favor in kind by performing it live. While fan appreciation is a good thing, what’s it like when a fellow guitarist appreciates your work enough to compose a concerto?

Susana: It’s always a great honor when a fellow guitarist recognizes your work and it’s even more special when your playing inspires a composer to write something for you.  We admired Marek’s work as a composer as well and were delighted when he proposed to compose a concerto for us. At the moment, we are working on a duo piece that Marek dedicated to us and we will be performing it in Poland next year.

Steve: In addition to performing together, as well as by yourselves, Duo Melis have also played with various symphony orchestras. Does performing with an orchestra provide a different feel, as compared to a solo or duo performance?

Susana: We really enjoy playing with orchestras. The feeling is totally different than performing solo or duo. When we play with orchestras, there is a musical discussion between the conductor, the orchestra and our duo, so it doesn’t have the same freedom as performing on our own. On the other hand, needing to adapt to other musicians’ ways of thinking and playing, makes this experience something very special and it helps you develop as a musician.

Steve: I saw a video on your YouTube page of Duo Melis playing “Toccatina Opus 40” by Nicolai Kapustin. I love how fast-paced it’s arranged, but are those kinds of pieces more commonplace in classical guitar than some think?

Susana: We listened to the Toccatina and we thought that it would be interesting to see if it could be played on two guitars. Although somehow the jazz idioms generally feel very close to our instrument, Kapustin’s complicated writing made it a very difficult transcription. The funny thing is that after working very hard to adapt the piece for a long period of time, we realized that it only lasts three minutes!

Steve: How have you and Alexis imparted your expertise as classical guitarists to the students you teach at the National Conservatory in Strasbourg?

Susana: Being a concert performer gives you the experience to teach your students many other components of the business apart from technique and the music.  There are so many things to learn from the experience of being on stage. All of which could really be helpful to teach to your students about how to prepare for a concert, a competition, how to present on stage and many other details.

Steve: Finally, Susana, are there any future albums, tours or projects in the works, in addition to your and Alexis’ serving as teachers?

Susana: We have a new CD coming out soon, where we play pieces by 20th century composers such as Manuel de Falla, Enrique Granados, Alberto Ginastera, Mario Castelnuovo-Tedesco and Nikolai Kapustin.  At the moment we are working on the program for our next album, with music from the French Baroque era. The entire program will be transcriptions of compositions for harpsichord and we are in fact working on those arrangements.  All of the above, in addition to the new piece dedicated to us by Marek Pasieczny, which we will perform next year in Poland.  We are preparing for our 2013-2014 tour which will take us to the United States, as well as many other countries in Europe and we’ll make our debut in India and China.

Considering that India and China are more populated than the US, I’m sure classical guitar fans in those two countries will be in for this Duo’s unique approach to classical guitar.

More about Duo Melis at: