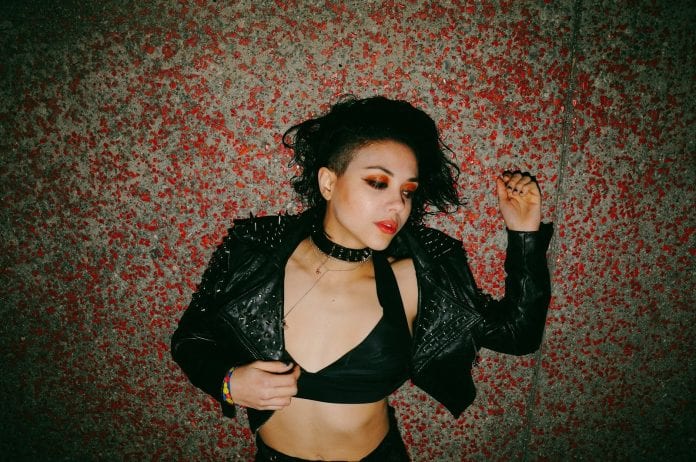 Alexa Melo released of the official music video for her first original single in almost three years, “DOPE SICK.” The 23-year-old West Coast alt-pop artist is back after recovering from major vocal cord surgery. “DOPE SICK” is from her sophomore EP entitled MUTE set to be released on October 12th.

“Dope Sick” was mainly inspired by a breakup, but its title isn’t a flippantly-used metaphor. “I grew up around substance abuse. And during a recent breakup, I noticed similarities in the addictive, masochistic behavior. ‘Dope Sick’ is about almost dreading the day the withdrawals end, because the healing officially signifies you’re truly alone again.”

To preorder the EP, go to: http://smarturl.it/MUTEep

Alexa Melo has garnered over 2 million views and 36K followers on YouTube singing her twist on cover songs. “DOPE SICK” has already received thousands of views, with hundreds of likes and comments.

Melo first self-titled album was released in Summer of 2015 and received widespread recognition with performances across the West Coast. Unfortunately, Alexa would be sidetracked due to a cyst on her vocal cord. “It got to the point where, if I didn’t get a vocal cord cyst removed, there would be irreversible damage,” Alexa would later reveal.

Despite this setback, Melo is back and has an even wider fan base, and is now ready to share her story of the last three years with the release of “DOPE SICK” and her upcoming EP MUTE (out on October 12th).

You are about to release a music video for “DOPE SICK” your first original release in almost three years …tell us about it!

Well, I wrote this song last summer while I was in a major transitional period. I began writing the first lyrics to the song while I was driving up to Berkeley from LA, with everything that I owned in the back of my car. I was moving out of my family home, away from LA after sort of reaching a rock bottom from a four year, unhealthy relationship. The inspiration for the song came from the concept that my relationship with pain and anxiety had changed. I began to associate all these negative emotions and abusive behaviors with love. Like an addict who craves and withdrawals from the very thing that’s causing the sickness in the first place.

The inspiration for the video started with the blood visuals and everything else followed. The director (Daniel Garcia) had this idea that we’d film droplets of blood dripping into an IV bag that I’d have attached to me and each drop would trigger a memory from the relationship like a morphine drip. Sort of showing how reliving the memories became as toxic and addicting as the relationship was.

You produced all the instruments on the track yourself. Who were the musical influences that inspired you to play those instruments?

I’ve been playing keyboard and guitar since I was around 12-13 years old. I started producing my songs around then as well. Every instrument I’ve familiarized myself with came from the desire and ability to produce and write records. And my inspiration to produce my own records comes from every band and artist that I grew up with. Production is a massive part of my love of music, both listening and the making of it. Playing the instruments myself was the only way to compose and produce on my own.

What’s your guitar gear consist of?

I have a pretty modest setup, nothing too fancy. I have an American Strat, and I have a hollow body noel Gallagher supernova guitar. I have a few fun guitar pedals and a VOX amp, but when I’m recording, I just plug my guitar straight in and effect my guitar tones through Pro Tools plugins. This gives me so much versatility and freedom to change the tone as the song progresses.

I see you have a new EP coming out in September titled MUTE. What can fans expect?

A lot of angst. I didn’t hold back on the emotion and I tried to be as raw and honest in my lyrics as possible.

Videography is my new interest. The director of all the music videos on MUTE, Daniel Garcia, sort of took me under his wing to show me a whole new world of videography. Through the production of these videos, I learned so much and it sparked my interest so much. I hope to get good enough one day to direct my own videos and maybe even direct videos for others.