Home Interviews Tenille Arts: Music, Award Nominations, Nashville, and Everything in Between

Tenille Arts is an incredibly talented rising country music star hailing from Canada who got major exposure on ABC’s The Bachelor. The show’s experience led her to a record deal, and she then released her sophomore album, Love, Heartbreak, & Everything in Between. The album did exceptionally and made even more of a name for Tenille Arts. After the success from the reality show and creating an album that received rave reviews, Art’s career has started to skyrocket.

Guitar Girl Magazine, along with several other media outlets, chatted with Arts via Zoom about her musical inspirations, the new high points in her career, and even bedazzling her guitar. She shared several pressing topics her fans want to know—her feelings about her nomination for ACM New Female Artist of the Year, which is her first US award nomination, being a part of CMT Next Women of Country Class of 2021, the success of her new single “Give It To Me Straight,” performing at The Opry, and exhilarating upcoming endeavors as a young starlet.

Arts is nominated for Academy of Country Music Awards New Female Artist of the year alongside other female powerhouses such as Mickey Guyton, Gabby Barrett, Ingrid Andress, and Caylee Hammack.

“I was sitting right here in my apartment, and my boyfriend had actually set up his phone. I was like, ‘This seems a little overboard . . .let’s just watch the nominations.’” When the announcement was made, Arts said she sat there with her mouth open, exclaiming ‘Is this real? Is this actually happening right now?’ Once it started to sink in, Arts said she was just so excited and grateful for her team. “It’s been a weird couple of years for everybody. I’m just very proud of my team and everybody that’s been a part of my career so far. This kind of feels like the launching off point for a lot of things.”

On being named as part of CMT’s Next Women of Country, Class of 2021, Arts expressed her excitement. “I was super excited to find out I was of that [Class] and that I get to share in that group of women.” Carly Pearce took the time to create a welcoming video for Arts. “How cool is that, that she took the time out of her day to welcome into this,” shared Arts. She went on to share that she “played for CMT five years ago as soon as I moved to Nashville, and I just remember hearing all about the CMT Next Women of Country. I feel really lucky to be a part of that group of women and hope to learn and grow with them over the next year.”

Arts also shared that the group of girls has been able to do a few Zoom meetings to stay connected and that the team sent them cookies. They have been able to get to know each other through texts and virtual meetings, and she hopes they can all meet in person to grow together and build their Next Women of Country community more fully.

Having grown up listening to many country artists of the ‘90s, when asked how it felt to know that artists like Faith Hill and Shania Twain have won this award, she said, “Yeah, especially being from Canada and knowing that Shania Twain winning this award was one of the first big things for her. I just hope to follow in those footsteps and have this be something that really takes my career to the next level.” 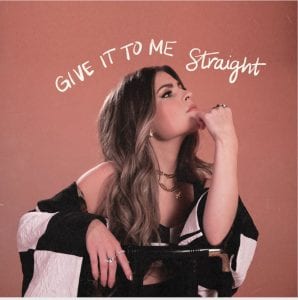 Arts has had many wonderful opportunities this year. She performed her recent release, “Give It to Me Straight” for Country Radio Seminar’s 2021 New Faces of Country Music. On performing the song, she says, “It was the first time I’d ever performed that song. I hadn’t even really played it acoustically or anything and played it with the whole band. And it was just amazing. It’s one of those songs that I just felt immediately super comfortable with. It just felt very natural to sing that song. I always get a little nervous before the high note, but performing it live was really fun, and getting a little bit of that nervous energy in there felt really good. We’re close to the end of this crazy year and a half, and it feels like we’re going to get back to live shows really soon. That just sparked a little fire in me and got me really excited.”

“Give It to Me Straight” was co-written with Dave Pittenger and Alison Velts. When heading into the writing session, she says, “This was an idea that I had literally the night before the writing session. I didn’t know what we were going to write,” which makes her panic. After hearing the phrase, give it to me straight, she thought, “There’s two different ways that you can take that phrase, ‘Give it to me straight’ – a drink, or just telling somebody, ‘I don’t sugar coat things. Tell me, what’s going on.’ We immediately clicked on that idea.”

Having recently performed at the famed Grand Ole Opry, Arts shared, “The thing about the Opry is that they want everyone to succeed. They’re bringing in these new artists because they think they deserve the opportunity to perform on that stage. And I think a lot of that too, for the nerves is just being like, ‘Okay, I deserve to be here. They want me here. They’re taking me in with open arms and they want me to be a part of this Opry family.’ I’m excited to be a part of that.” 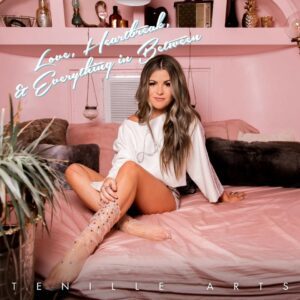 When it comes to guitars, she got her first guitar as a Christmas gift from her parents. “I grew up always wanting a guitar, and my parents got me one for Christmas, 10, 11 years ago. It’s a guitar made in Canada, and it’s one of my favorites. I always feel like that’s where I write my most vulnerable songs. Then I also have two PRS acoustics and the black one I got as something to go with my album, Rebel Child. I just recently got a new one and bedazzled the entire front of it to go with Love, Heartbreak & Everything In Between. I have three guitars, and I love them all. They kind of all have their own little thing going on.”

Arts chatted about the country music scene in Nashville saying, “I think for me, it’s just like realizing really how small the community is. Once you get your foot in the door, it’s small, and everybody really does kind of know each other around Nashville. They’ve all worked together at some point in time. Every time I run into an artist, they’re like, ‘Oh yeah, you worked with this writer or this producer or whoever.’ It is just one big thing.” Her biggest takeaway? “The biggest thing I’ve learned is to keep those relationships going and rely on other women in country music.”

To learn more about Tenille Arts, follow her on all social media platforms @tenillearts.