Home Interviews The Command Sisters talk music, sisterhood, and the power of guitars in... 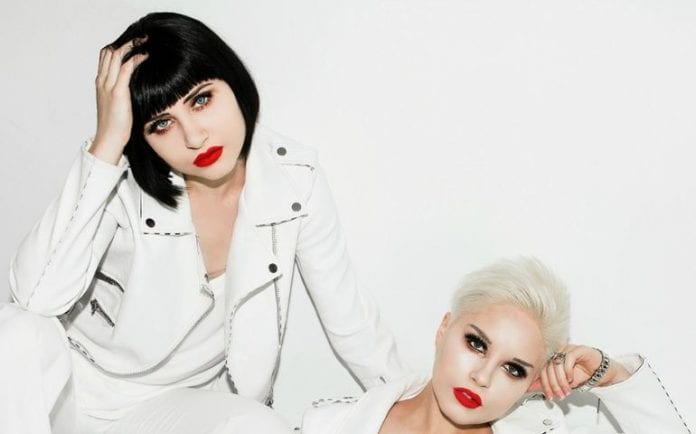 Charlotte and Sarah Command are “commanding” a great deal of attention lately as the sister duo The Command Sisters. The Toronto based duo began their musical journey in the small town of Alberta playing acoustic instruments in the county genre. Over the years, they felt something was lacking and changed their course following their gut and relocating to Toronto to follow a more electronic, energetic style of music. This new sound can be heard in their debut pop single “Low Profile” which was released in the fall of 2017.

The sisters were recipients of the John Lennon Songwriting Contest, have performed at the She Rocks Awards at NAMM, and have been named one of Canada’s Walk of Fame Emerging Artists, to name a few of the duo’s achievements.

We caught up with the sisters about their use of guitars to fuel a powerful pop song, sisterhood, the guitars they play, and what’s next on their horizon for The Command Sisters.

What was the inspiration behind your single “Low Profile” and the songwriting process?

Charlotte:  The creation for “Low Profile” was a very interesting process for me. I actually wrote this song about a vivid dream I had, where I was in a tumultuous relationship with someone who was full of secrets and wouldn’t open up to me. Keywords like, ‘Low Profile’ and ‘Lifestyle’ came when I woke up, and I knew there was something special I needed to do with it. It didn’t take me long to find a melody and finish it the next day; the lyrics spun their own web, and everything just went from there.

When it comes to being sisters, do you both feel that the bond helps you become more creative while writing?

Charlotte:  Sarah and I, not just being ‘close’ but also being sisters, I believe, is a big factor in the creative process of our songwriting. Having a career together has taught us a lot about loyalty; being business partners while also being family and learning how the two can co-exist. Because we’re family, we’re able to be super honest and open with each other when we song write, so there’s no nervousness or holding back. Songwriting is all about transparency with the other person, which we obviously have as sisters, so it definitely becomes an advantage when collaborating.

We recently saw that you have partnered with Press It; how did this partnership benefit the band when it came to filming the music video?

Charlotte:  For us, the visuals are just as important as the music. It is a space where we can feel very creative, where we can create a “Command Sisters” world on set. We have a million movies and music videos planned in our heads that go to our new music. So, it was very special to complete the first one with the help of Pressit. They let us collaborate and brought our ideas to life even bigger than we imagined. The video was pretty wild for us. I can’t say much, but pink Marshall Stacks and a tattoo artist was included! We can’t wait to do something crazier next time.

Has the band always been the Command Sisters, or did you both ever venture towards other groups or solo projects beforehand?

Charlotte:  We’ve always both just been the Command Sisters. Our career is currently a little busy, so I don’t think we’d have the time to commit to other bands. We always joke though about starting a Hall and Oates tribute band on the side!

As far as both of your backgrounds in music, when did you both start playing guitar?

Charlotte:  I started guitar when I was 12, which really paved the way for my passion for songwriting. Sarah started guitar around the same time, well, she was around nine, and absolutely HATED it because it was painful and far too big for her. So, she picked up a mandolin instead, which was more her size, and loved it! When she saw me getting good at the guitar, however, healthy competition kicked in, and she wanted to give it another try! She picked up the guitar so instantly and naturally and MUCH quicker than me, immediately figuring out how to solo on her own and has never looked back.

I’ve seen on social media that you’ve unfortunately been a victim of bullying? How did you both find ways to combat this unfortunate ordeal?

Sarah:  Yes, I dropped out of high school in grade 11 due to a severe case of bullying that put my safety at risk. It is a time in my life that I don’t like to look back very often. It took me a few years to recover, which I think shows the real impact that bullying can have on a person. I still have my days. Thus far, I have chosen to not speak on it much, with the fear that it will come off as a publicity stunt. But I really do want to start using my voice in any little way that I can. I hope, if anything, our music can be an example of someone overcoming hate and instead do what they truly love to do.

A lot of the songs from our upcoming album have the message of being bold, independent, and ultimately being yourself. I don’t think I could sing those words so close to my heart if I hadn’t been through what I have been through. There is a positive to (almost) every situation.

As musicians, what fellow artists played an inspiration for creating “Low Profile”?

Charlotte:  The Weeknd was a HUGE inspiration for this one, (i.e., “Can’t Feel My Face”) and a lot of funky stuff from the ‘80s and ‘90s. I wanted to create something that was pensive and moody lyrically, but, sonically, sounded fun and hooky and upbeat. Also, that bass though.

Endorsed by Martin Strings, how do you feel about the playability and tone? For both of you, what is your acoustic guitar of choice?

Charlotte:  Martin Guitar has been our acoustic since day one. Our sponsorship actually came years after, surprisingly. We were performing at the main stage at the NAMM Show in California, and Chris Martin had seen us while grabbing a taco. We are dedicated Martin players, both with their strings and instruments. Once you play one, you’ll know. There’s nothing like a Martin tone when you’re writing a song.

Sarah:  Our new music is filled with electric guitar sounds. From distortion to funk rhythm. Electric guitars can give any pop track that extra funk and rock ‘n’ roll edge, which is why we love using it in our music so much.

Our electric of choice is our S2 Starla from PRS Guitars. Like our Martin, it is effortless to play. Super light, which helps us rock out on stage. And the tone is fabulous. Did I mention it looks incredible with every suit I own? Probably one of the most stylish guitars I’ve seen. #Sold

What’s next for the Command Sisters and when can fans expect the news? Video release? Touring?

We are excited to announce that our debut album will be out soon, with a series of crazy vids and shows to follow shortly after. We will also be launching a special merch/clothing line in the near future, entitled “COMMAND.