Home Interviews The GFM Band: Defining “Beautycore” for the Women Movement in the... 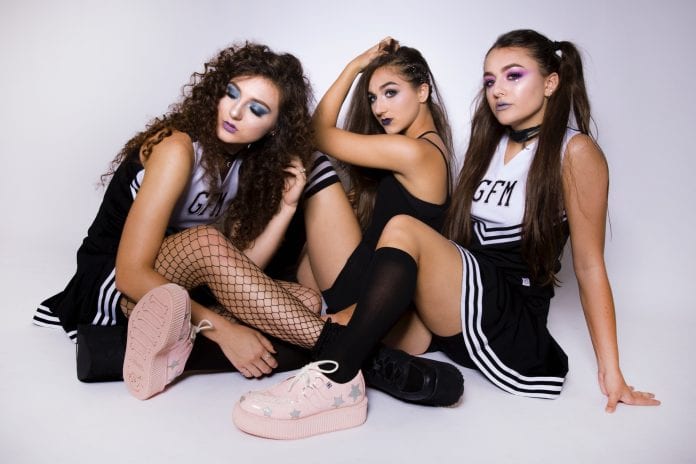 Funny how great developing talent makes its way to GGM, and maybe this could be categorized under the heading “Divine Intervention.” The Christian “Beautycore” sister trio Gold Frankincense & Myrrh (or simply GFM) based in Jacksonville, Florida (as was Lynyrd Skynyrd) featuring sisters CJ, Maggie, and LuLu English is no exception. These young sisters were mentioned to one of GGM’s contributors by none other than his cable guy, and after he checked them out, he went straight to our editing team; and now we are excited to share with you what we learned in a great interview with this very cool band, GFM!

Gold, Frankincense & Myrrh is described as a “beautycore” band. Tell us more about GFM and beautycore.

We came up with the term beautycore in 2016. People were always asking what genre of music GFM was, and we would tell them metal or metalcore, but we didn’t feel that we completely matched up with the “definition” of metalcore. Obviously, we aren’t your average metalcore band because there are only three members of GFM, and we are all girls who are 19 and younger. We started using beautycore as a joke between the three of us, but a bunch of bands we were playing with actually liked it, so we started running with it. Now it stands as the title of the women movement we are trying to bring to the metal world.

When did the three of you decide to form a Christian metal band and how did you decide on the name GFM?

Since we are all sisters, we grew up playing music together but didn’t officially start GFM until 2011. We were a cover band then, and we were playing some shows. Then in 2014, we started to write original music and began touring as original GFM. We are a faith-based band, and GFM stands for Gold Frankincense & Myrrh. Our mom suggested using Gold Frankincense & Myrrh because those were the gifts given to Jesus at His birth, and we were three gifts given to her.

Are your parents’ musicians? How did you get involved in music?

Our parents actually do not play any instruments, and they don’t sing. Because they are not musicians, they wanted us to be involved in music in some way, just to give us a broader perspective of life. They told us we had to take music lessons when we turned five, and if we absolutely hated it, we could quit after two years. We all ended up falling in love with music, and the rest is history.

What bands have had a major influence on your music?

There are way too many to name, but a few bands that have really influenced us as musicians are I Prevail, A Day to Remember, and Wage War.

CJ, you’re the oldest and play guitar. How long have you been playing and what inspired you to learn guitar?

I’ve been playing for one year. Honestly, Taylor Swift’s first country album really inspired me to play guitar because she was a young woman playing guitar and singing and making her mark in the music industry.

Next up is Maggie on bass. Did seeing your sister play an instrument encourage you to want to play?

It actually didn’t. We all started music lessons around the same time because we are so close in age. We all were supposed to start with piano, but I was the only one who continued with it; everyone else branched off to their own instruments. It wasn’t until Lu had started to play drums that I picked up the bass. I was still playing piano, and our dad pushed me to learn the bass so that we could start a band. I was afraid I wasn’t going to be any good at it and that it would be too hard to learn, but within a month, I couldn’t see myself playing anything else.

And, finally, Lulu rounding out the trio, I guess drums would be the natural instrument to add to the family’s arsenal of gear.

I picked the drums when I was four and a half; I didn’t even want to try to play the piano. I had a passion to play the drums before the idea of starting a band even came around. After I had been playing for about a year, our dad encouraged us to start the band. Maggie started playing bass, and GFM was created.

We always want to be able to promote a positive message through our music, whether that be serving as a beacon of hope or just relating with people in their troubles. We want our listeners to know that they’re not alone in their struggles, and yeah, sometimes life sucks, but you are strong enough to get through it. We are a faith-based band, so we will always promote our relationships with Christ as well, seeing as that is the only reason we’ve been able to remain in a healthy mindset and get through our issues. We’re not going to force that down our listeners’ throats, but that’s also something that we will never shy away from.

You’ve released two albums with the last one titled Identity Crisis. Share with us one song off of that album that speaks to you and what message you would like to share with our readers.

Identity Crisis didn’t have a “title track,” but the song that acts in that way is “Graveyard of Identities.” It talks about how easy it is to morph into a different person when you are around different people. There are a lot of insecurities that come with the constant morphing of yourself, and you very quickly start to lose who you really are. Those are some of the loneliest times of your life because nobody knows who you truly are; not even yourself. We want to bring awareness through “Graveyard of Identities.” The struggles listed above are often silent, and you can’t get help without reaching out, so we started our “I Will Not Be Silenced” campaign. We encourage our listeners to reach out and get help; to not be silent if they are dealing with anxiety, depression, self-harm, or even suicide. We urge them to not morph into somebody that will make others happy. It’s okay to not be okay, and we will always be there for our listeners, even if no one else is.

Your faith is obviously very important to all of you as evidenced by the band name and through your music. How does it help guide you all both personally and in your musical career?

As we stated earlier, the only reason that we are all still here is because of our relationship with Jesus Christ. We’ve all gone through times while growing up where we didn’t “feel okay,” where without that constant relationship with Jesus, we could’ve gone into a downward spiral mentally. There have also been so many times where God has physically protected us, whether it’s through van breakdowns, sicknesses or injuries while performing or drives where no one has slept. We also credit all of our success to Jesus Christ because there is no way we could get our opportunities without Him.

Being so young, where do you draw your inspiration from for your music and what part do each of you play in the songwriting process?

When it comes to songwriting, we don’t have a specific system that we use. We all bring different ideas to the table whether it is with lyrics or melody.

Since your last album was released in 2016, do you have plans on releasing any new material soon?

There is new music in the works, but we are not at liberty to talk about a release date yet. We are super excited about the new songs, and we can’t wait for our fans to hear them.

Tour Vlogs on your YouTube channel are clips from some of your travels while touring. Do you have a crazy tour story to share?

On our California tour in 2017, we were just entering Lafayette, LA on I-10 when our trailer came off the hitch of our van. Luckily, we had chains connecting the trailer to our van, but this meant we were dragging the trailer behind us, while the trailer jack was scraping the asphalt. We could see sparks shooting behind us as we were driving and had to maneuver through multiple lanes of rush hour traffic to pull off on the side of the road. We made it safely to the side of the road and luckily were able to lift the trailer back onto the hitch. The entire faceplate for the trailer jack was burnt away, and there was a burn trail on the road behind us. We were blessed to have some friends nearby who looked at our trailer and let us stay the night.

What does sisterhood mean to you?

It means having a special bond with your sisters that creates music in and of itself. This allows the creativity to flow between the three of us and to create a sound that is like nothing in the marketplace. It means always having someone to share life with, to share music with, to share the struggles of life on the road with, and someone to celebrate all the successes with.

GFM has quite a few shows lined up in the next few months and then will be heading to Germany for the CVJM Loud and Proud Festival. Will this be your first time overseas?

Yes, and we are totally stoked to begin our international music life. We can’t wait to finally meet our fans from all over the world.

We have a silly warm-up dance that we do to loosen up our muscles because our show is so energetic. We also always pray right before we go on stage.

If you had the opportunity to collaborate with any artist or band, who would it be and why?

Can you give us a rundown of your stage gear?

We are sponsored by Orange Amplifiers, so both CJ and Maggie use their amps. LuLu is endorsed by SJC Drums, so she plays a custom designed SJC kit. We are endorsed by 64 Audio, so all of our in-ear monitors are made by 64 Audio. All of our equipment sits in our endorsed Gator Cases. CJ plays with endorsed Sinister Guitar Picks, as well as Schecter, ESP, and Charvel Guitars. Maggie plays an Ibanez and an Ernie Ball Music Man bass. All of our mics are Shure mics.