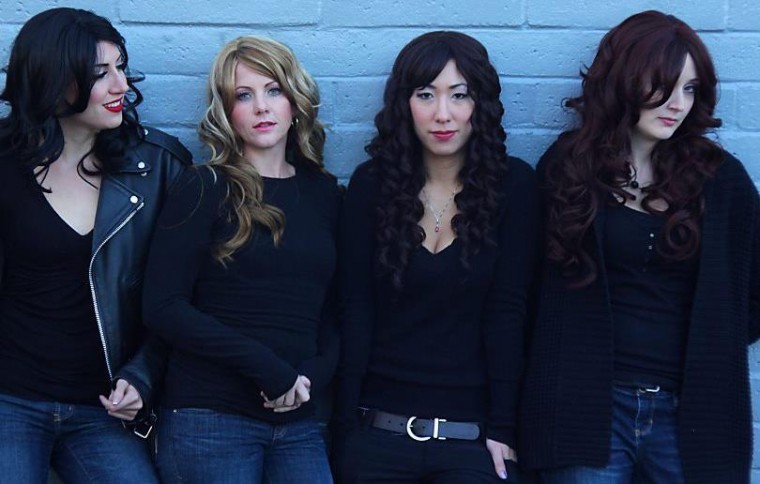 If you have not had the chance to check out this tribute band, now is your chance because there is truly nothing like the Killer Queens.  Founded by one of Queen’s biggest, die-hard fans, Joyce Kuo made this vision of an all-female band come to life.  In fact, they are the world’s only all-female tribute band to Queen.

Their shows are high energy and focus solely on their live performance. Equipped with Brian May’s Red Special and Vox amp, Freddie Mercury’s free falling mic stand, and authentic costumes to match, these extremely talented musicians offer a full show with costume changes, lights, fog, and are for all ages to enjoy.

Guitar Girl Magazine’s very own Tara Low first met up with these killer rock stars early this year at NAMM in California. See the interview here on YouTube.  We wanted to learn more about these talented ladies, so we followed up with them and this is what they had to say.

GGM: How long have the Killer Queens been playing music together as a band? Does any member play or played in an original band?

TKQ: At the end of 2011, The Killer Queens came together and began diving into the magic of Queen. We have all learned so much while exploring the complexity of their music.

Our singer, Nina Noir has a self-titled solo rock project as well as writes and sings for an Americana project called The King’s Horses.

Our drummer, Dana Parker has played with many original projects in the past including a project called The Shebangs and cofounded Different Strokes Percussion.

GGM: How did you all meet?

TKQ:  Every member of The Killer Queens has been active in the San Jose music scene. We met through mutual friends and shared musical projects. None of us had played together before our first rehearsal but many of us had wanted to work together. This project was the perfect opportunity.

TKQ:  There have been so many incredible shows. It is hard to pick the most memorable. One of our first major shows was at Northstar Ski Resort in Tahoe. We got the opportunity to play for a few thousand people on New Year’s Eve and ended the show with a giant fireworks display! It was an outdoor show in the freezing snow covered Sierra Mountains but it was totally worth it.

GGM: How do listeners respond to an all-girl Queen Tribute band?

TKQ:  There tends to be two reactions. The first reaction is shock that an all-girl Queen tribute exists and that they have to see that! The second reaction is a suspicious audience that wonders if a bunch of girls could really rock as hard as Queen. We are lucky to attract an audience that rocks out with us and sings every single word to all their favorite songs! Over the last couple of years we have gained a dedicated fan base that comes to all of our shows. It is an amazing feeling to get to share something that means so much to us with so many other Queen fans.

GGM:  Who are some of your other musical influences?

TKQ:  We all have such a wide range of favorite bands. We love Stevie Wonder, Michael Jackson, Etta James, No Doubt, Tenacious D, Sublime, Incubus, Portishead, Bjork, Sly and the Family Stone, Led Zeppelin, The Who, Linda Ronstadt, Metric, The Pretty Reckless, and of course, Adam Lambert, who is currently on tour with Queen!

Be sure to check this band out because they will, they will, rock you!! Rock you!!

Get social with The Killer Queens: