My name is Leanne, and I’m a bassist and vocalist! I picked up the bass at age 12 and taught myself to play by learning my dad’s entire CD collection. I’ve been touring professionally since 2013 when I joined the band, Hunter Valentine. We played everywhere, from festivals in Japan to US tours with Cyndi Lauper, to Linda Perry’s studio in Los Angeles. When they disbanded in 2016, I set out on my own as a hired gun, taking gigs with tons of different artists! My roster of recent gigs includes Hank Von Hell, Corey Feldman, Jane Holiday, and Derek Day. I love playing live, and being on tour is my favorite!

I never thought much about tone until I became a hired gun playing for multiple artists at a time. When I was working on my own projects, I would quickly find a tone I liked in the amp and bass settings and stick with it. At one point early in my career as a hired gun, I was playing for a black metal band and a folk singer-songwriter in the same week, and I realized I’d need to up my pedal game to fit their styles. Now, I have a tone setup for each artist I work with, and I’m always open to suggestions based on their preferences. My definition of bass tone currently is seamlessly fitting into a style while also maintaining a bit of personality

I play a 2008 Fender Precision bass. I’ve been playing Fender since I learned to play at age 12, and my dad actually gave me my 2008 bass as a gift. He passed away in 2011, and he’s the reason I am a musician, so having that bass with me on stage feels special and significant. As for amps, I had to sell some of my favorite gear when I moved from NYC to LA, so I left some good amplifiers back there, but right now, I’m using an Ampeg 112V2 75 watt combo. I use a full tone bass drive pedal for any grit that an artist might want, and I use an Empress compressor for more pop style projects. I also use a Cry Baby Wah pedal from time to time.

I use Ernie Ball slinky bass strings! I generally like a sharper tone, so I go with rounds rather than flats.

I am all about preparation. If possible, I go into the studio fully, having memorized the songs I’m recording. That way, I have a solid foundation of understanding for any improvisation or changes that an artist might request, and I don’t need to waste time figuring anything out. If we’re writing the songs in the studio, my technique lately has been “do more!” I was in the studio with Tim Armstrong (Rancid, The Transplants) last year, and he pushed me way out of my comfort zone, and I wrote some of the coolest bass lines of my life. Of course, you should always get a good “safe” take, but it’s essential to think outside the box if you have time to get a few wild takes to have as options.

I have a huge filing system that contains the charts I made for every artist I’ve worked with in the past five years, even if it was defined as a “fill-in” or a one-off. If and when they call me back, I don’t have to start from scratch, and can just relearn based on those charts. Once a show is booked, I run the set at least once per day in order to memorize the material. I also listen to the music even without my bass in hand in order to speed up memorization.

You might not be taken seriously as a female-identifying musician or crew member — people often assume I got a gig based on my looks rather than my skill. My advice is always be prepared to prove them wrong. Have your “secret weapon.” I cannot argue that I’m the BEST bass player in the world — I’m not! But I get gigs by consistently showing up as the most professional and prepared person at the audition or at the fill-in gigs. Define what sets you apart, and when people try to knock you down, remember why you were hired. 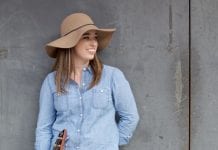