Ever since Kiki was a wee little girl, she had a passion for animals and music. Like many little girls, she dreamt of being a veterinarian, playing doctor on her stuffed animals.

At the age of six, she also discovered her passion for music and started classical piano lessons. When she was thirteen, her family gifted her father the first family acoustic guitar, a Yamaha Eterna, to be exact. Her father taught the first influential three chords G, C, and D. After that, she sought out the rest of her guitar education through the internet (yes, pre-YouTube days). She played in countless garage bands throughout high school with all types of music varying from indie to, more importantly, death metal. She also learned how to play the drums at the age of sixteen followed by a bit of undeniable bass-slapping.

After graduating from the University of California, Irvine with a bachelor’s in Biological Science/Pre-Medicine, she decided to take a break from the books and become a full-time shredder with the all Asian-American girl band, Nylon Pink, as the lead guitarist and, later, lead vocalist.

She then had experience playing on stage with Taylor Swift at the 2014 VMA’s and Usher at CBS’s Fashion Rocks Fall 2014. She was also the lead guitarist of Bret Michael’s in a commercial for Nissan. She then joined the band She Demons run by the Misfits’ Jerry Only, touring internationally and nationwide in the fall of 2015 as direct support for the Misfits. The band name was later changed to Hellfire Heart.

After music took a halt, her and former singer of Nylon Pink, Kaila Yu, decided to pivot their brand into a travel, beauty, and lifestyle blog, which generated over 100,000 views per month in the first six months of release. They later wrote the best-selling book “30-Day Travel Challenge: How to Make Your Travel Dreams a Reality and speak as travel experts on multiple news networks such as KTLA, CBS, NBC, and Fox News.

She lives in Los Angeles, Calif. with her two beloved furry feline masters (that’s right, they reign the house), Meowlius Caesar and Nyx, and her tattooist boyfriend, Martin.

What is your definition of tone, and how has it changed over the years?
Tone has been a touchy subject ever since I’ve picked up a guitar. Growing up, I really loved metal…like really, REALLY loved it. I loved it so much that I didn’t really like any other tones except for heavily distorted dirty metal chugs. This likeness still sticks with me to this day, though recently, I’ve been more interested in exploring cleaner tones as well.

Which guitars, amps, and pedals are you currently using and why?
For years, I’ve played Ibanez and Schecter guitars because of the heavy metal tones and body shapes. However, now I’m playing Zemaitis, and I’m absolutely LOVING their guitars. They put so much care into the craftsmanship and treat their guitar-making like an art. I’m so happy with my Zemaitis® Z22QQ TOB. I also play out of a Marshall JCM 2000 and use really minimal pedals these days.

Are there certain recording techniques you prefer in the studio?
When I played in a KPOP cover band, we did a lot of post-production and a ton of effects to make it sound more electronic. Recently with our new releases with Vigil Of War, we recorded at Barefoot Studios where tons of Warped Tour band records were made. It was amazing to create all of our sounds direct from amps…no plugins, just raw tones. I loved that recording style.

How do you keep your sound consistent onstage?
Because I don’t play with too many pedals, I honesty prefer just to get the tone perfect on my amp. I move around a lot on stage and have accidentally activated pedals on live shows, so I like to get it right and tight on my amp.

What does your practice consist of?
Scales, scales, and more scales with a metronome, of course. Then a few twiddly dees and twiddly dum stuff to warm up. Lastly, I run through the set, once sitting down and the rest standing up.

What is your advice for young women who hope to work in the music industry?
Be bold. Be brave. Don’t let anybody tell you who you should be. Be yourself and own your s**t. You are a magical unicorn, talented and beautiful in your own way. That’s what people want to see!

Get your copy HERE. 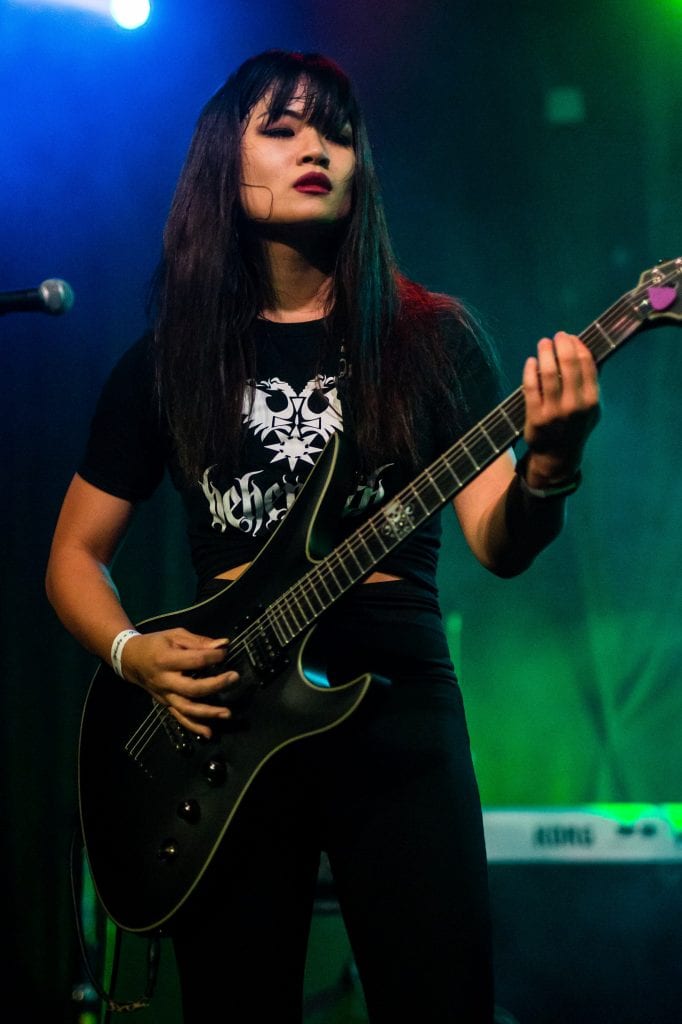