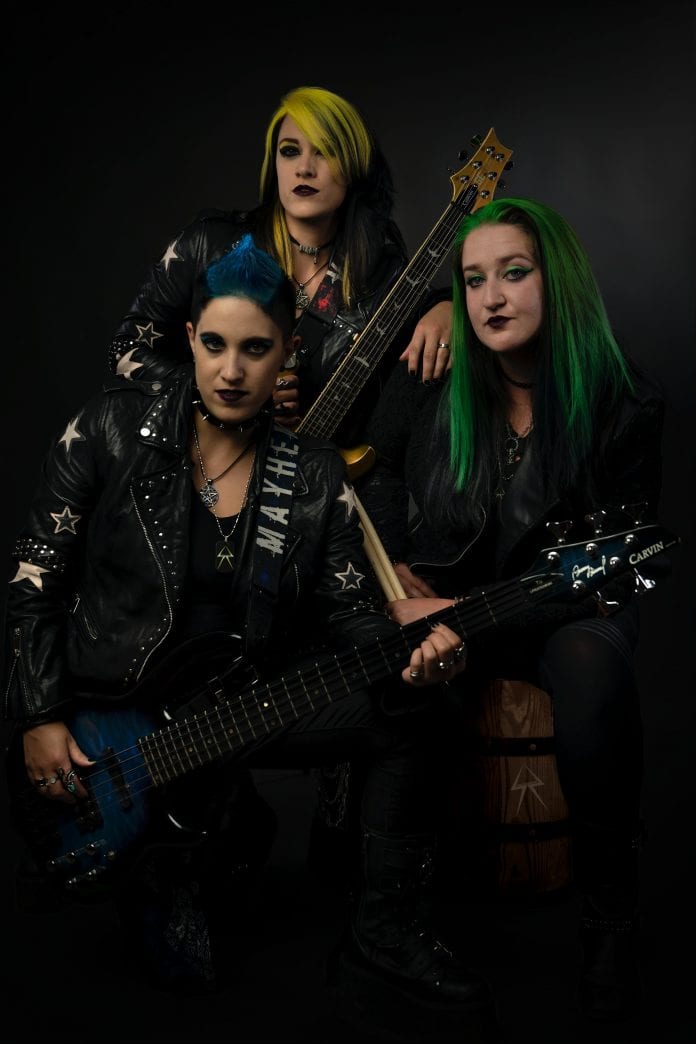 My name is Tanya Venom, and I am a guitarist, singer, songwriter, performer, and touring musician. I have an identical mirror twin sister named Tia Mayhem who plays bass guitar—so I like to say, I was born with a bassist, haha! I started playing guitar when I was around thirteen years old, was gigging out at bars by age sixteen with an all-female classic rock cover band in the greater Detroit area where I was raised, and after high school, I took my musical dreams to the next level by attending Berklee College of Music and graduating with a Bachelor’s Degree majoring in film scoring with my principal instrument as the guitar.

During our time at Berklee, my sister and I formed our own original all-female rock band called Flight of Fire which we toured with internationally for several years as the bassist and lead guitarist, respectively. Flight of Fire disbanded over the summer of 2019, but the chemistry between the drummer, Maddie Scott, and us was so uncanny and powerful that by October of that same year, the three of us girls formed a brand new hard rock/heavy metal power trio together called Stormstress.

Having previously been primarily instrumentalists and backing vocalists after overcoming a childhood diagnosis of selective mutism, Tia and I stepped up to the plate to become co-lead vocalists in addition to playing bass and guitar in this new group so that the three of us could work together exclusively as a trio. Stormstress is my primary project, my heart and soul. Our mission with Stormstress is to share our message of empowerment through our music and take the world by storm. My sister and I also have a secondary acoustic duo project called Venom & Mayhem, where we play acoustic rock/pop originals and covers. Both of us trade off singing lead vocals and harmonies for each other while I accompany on acoustic guitar and Tia on congas. My top guitarist influences include Jimmy Page of Led Zeppelin, Synyster Gates of Avenged Sevenfold, Neal Schon of Journey, and more recently, Nita Strauss. In addition to the previously mentioned bands, my riffs, vocals, and songwriting characteristics are influenced by bands such as Halestorm, Judas Priest, and Ghost.

What is your definition of tone, and how has it changed over the years?
My definition of tone is the one-of-a-kind combination of the many things that make your guitar voice uniquely yours. From the physical aspects, such as gear, to the energy you exude while playing or performing, your tone is your musical fingerprint. My playing style originated from a classic rock/blues standpoint, but I have modernized over the years as I discovered and fell in love with metal and harder rock. My picks got heavier as the riffs did. I moved from standard medium picks to my own custom jumbo jazz 1.14 gauge. I also switched from playing a Gibson Les Paul to primarily playing PRS guitars. My sound preference for a healthy combo of heavy overdrive, reverb, and delay, along with my playing style of heavy riffing with lyrical yet soaring solos, have been a core part of my tone since the beginning but have gone through some refining over the years.

Which guitars, amps, and pedals are you currently using and why?
I currently use three PRS SE 24 guitars for my main “guitarsenal.” A red one named Bloodbird that I use for standard and drop D tunings, a gold one named Thor that I use for Drop C and D standard tunings, and a black/grey PRS SE 7 named Reaper for the extra heavy stuff. I love PRS Guitars because they are great quality instruments that are also lightweight and tonally flexible. They can produce monstrously heavy sound while also singing with beautiful ease, and they have effortless access to the full range of the double octave, where I spend a lot of time soloing. I run my guitars through a Laney Ironheart 120 head and a Friedman 2×12 cab. The Laney is a beast, and I love it because it has massive gain, a huge range of EQ customization, and reverb as well! It has three channels so I can easily switch between a beautiful and crisp clean sound, a chunky and heavy rhythm sound, and a fierce lead sound—which is separately customizable too, not just a boost. I like to keep my setup fairly simple, so as far as pedals go, I have the Laney channel selector, a delay pedal, and a Shure GLXD16 Guitar Pedal Wireless System, which comes complete with a full standby/tuner function. Having total freedom on stage is very important to me as a member of Stormstress because we go all out with our stage performance, so this wireless pedal system is a vital and fun part of my setup. Being a huge fan of Led Zeppelin’s Jimmy Page, I was mesmerized by his innovative guitar technique of bowing the guitar with a cello bow, so I decided to get one and try it out myself. A couple of years ago, my Dad helped me rig up red LEDs along the bow and now it has become an iconic part of my setup. I call it the GlowBow, and I leave it hanging on a slide holder on my mic stand when it’s not in use.

I exclusively use Ernie Ball Hybrid Slinky Strings for my six-stringed axes and Ernie Ball Skinny Top Heavy Bottom for the seven-string. My sound and playing style revolves around having that heavy, chunky low end for riffing while keeping the higher strings light for quick soloing and wailing bends.

Are there certain recording techniques you prefer in the studio?
I’ve come to love the technique of recording through two different amps at the studio and mixing the two sounds together. I usually record a double track on each amp which gives you that huge wall of sound while also giving it a unique depth due to the combination of two distinctive sounds. I always use my Laney in the studio as my primary amp and mix that with whatever cool amp the engineer has at the studio that would fit the vibe of the song the most, however, I like to let the engineer choose the second amp because I trust that they know their equipment best.

How do you keep your sound consistent onstage?
I always bring my full rig to shows whenever I can to ensure that my sound on stage remains as consistent as possible. I recently came into possession of a Laney IRT-Pulse Ironheart Tube Preamp, which also functions as a pedal, that I can use as a transportable version of my amp to maintain the closest version of my sound as possible at shows where I’m unable to bring my full setup, for example on tour overseas or at venues that have specific backline requirements.

What does your practice consist of?
I usually start my practices by warming up with some scalar exercises, then escalating to speed cycle sequences, and then digging into whatever new technique I’m working on at the time, which at the moment is sweep picking. Once I complete the technical segment of my regimen, I’ll run through a handful of Stormstress songs and a few covers, cycling through each guitar and tuning.

Favorite guitar riff or lick that inspired you to play guitar?
Led Zeppelin was my first love when I started playing guitar. Jimmy Page is a riff machine! His riffs in songs like “Whole Lotta Love,” “The Immigrant Song,” and “When The Levee Breaks” always get me going! I’ve been getting into some serious groove metal lately, and right now, I’m obsessed with the riffs of Gojira, especially the ones in “Silvera” and “Esoteric Surgery” to name a few.

What is your advice for young women who hope to work in the music industry?
My advice for young women who hope to work in the music industry is to stick it out and never lose sight of the ‘why’ – your goals and dreams. In this complex and ever-changing industry, it’s equally as important to recognize your failures and mistakes as learning experiences as it is to celebrate and embrace the little victories and great successes as they come. True failure can only come to those who quit trying. Everything you do should be in service of your dream, which means hustling when it’s time to work hard but also resting with intention. For anyone, but especially women, a career in music and the lifestyle that comes with it is a far cry from what “society” would deem normal, but just because it’s different does not mean it’s wrong. In fact, isn’t being original and unique what distinguishes us? Be your authentic self, no matter how offbeat that may be, and people will be drawn to your shine.