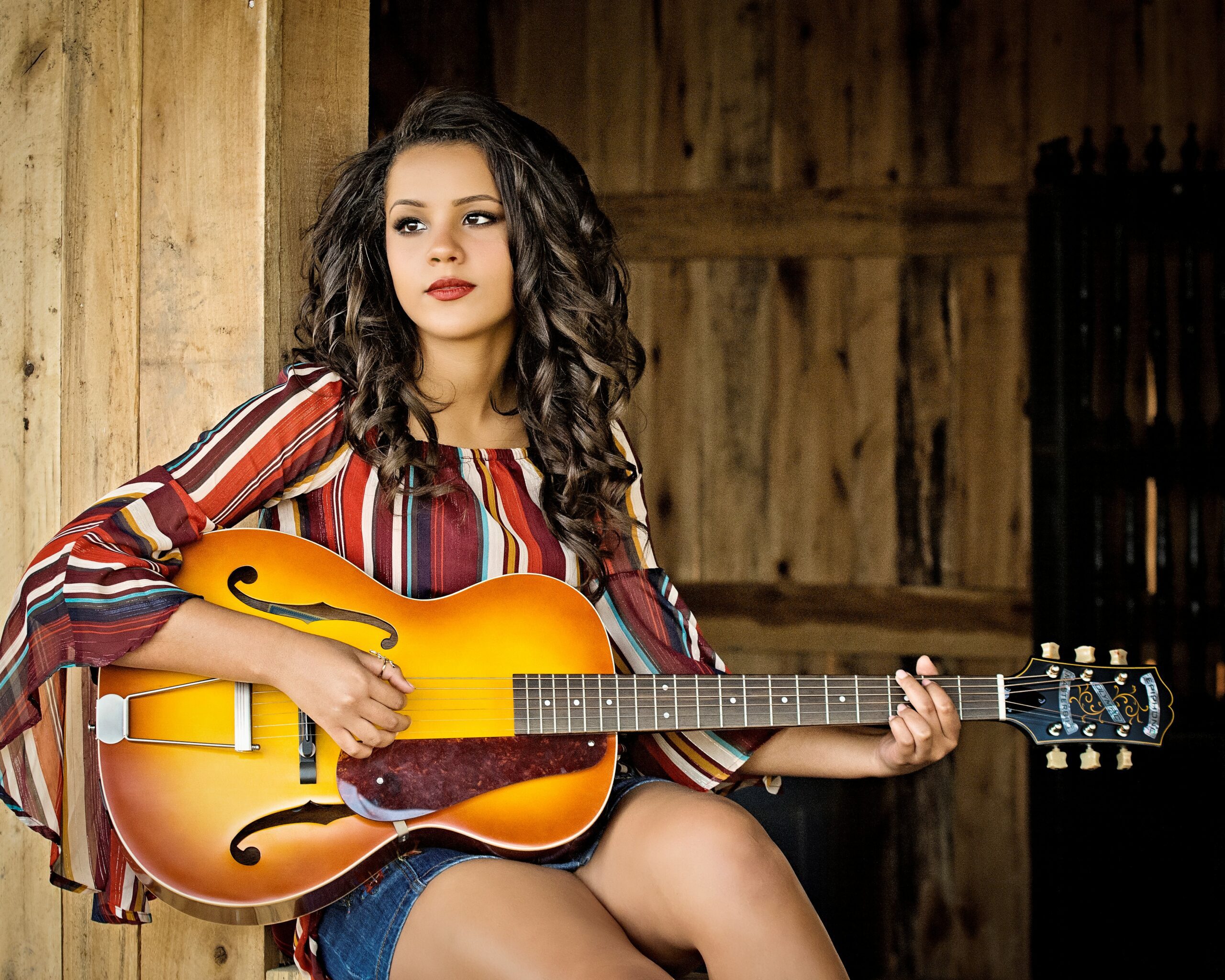 Tristan McIntosh, former American Idol contestant, is honest, and her honesty is reflected in the music she writes. Guitar Girl Magazine recently chatted with Tristan and talked with her about her experiences from American Idol, her early exposure to and influences in music, her songwriting process with music partner, guitarist Bronson, and her latest project, The Linda Ronstadt Experience.

Most of us know you from American Idol. Tell us about your decision to audition for Idol? How old were you?
I had tried out for America’s Got Talent when I was younger, but nothing really came of it. I’ve always wanted to try for a TV show because that’s how a lot of people get their start. I decided I wanted to try out for Idol when my vocal teacher said they were having auditions. I was 15 at the time I auditioned in Little Rock, Arkansas.

What was your biggest take away from that experience?
It’s kind of the unity of being a musician and really just this industry. Because it’s not really just a competition. A lot of us end up becoming a family and becoming friends with each other and helping each other out. It’s more of a community than it is a competition.

How old were you when you started singing?
I think I was nine or ten. I didn’t know I wanted to be a singer at first. My mom heard me singing around the house. There’s actually a funny story in that. When she first heard me sing, she was like, ‘Oh, that’s pretty good.’ So, she took me to a vocal coach and literally asked her, ‘Hey, does my daughter have talent, if not don’t waste my time and my money.’ And, she was like, ‘Yeah, she’s pretty good. She has talent.’ So, if she would have said no, I would not be a singer. I would not do what I do today.

Did you grow up in a musical household?
No, I didn’t, but they were really, really confident in me.

Now, what instruments do you play?
I started out on piano when I was four and have added on instruments since then. When I was 11, I started guitar and trumpet, and those are the three instruments I mainly play now. I used to play violin, but I don’t play it anymore because it hurt my ears too much.

Trumpet? Do you play it any of your shows?
I do. I play it at shows every so often. The crowd really enjoys it.

Who were some of your early musical influences?
I was really into everything my grandfather was listening to, so I was a big fan of Alan Jackson and Reba McEntire, and I also really liked Alicia Keyes. It was a real mixed bag with me.

What are you listening to today?
Today I’m listening to Linda Ronstadt, Norah Jones. It’s more of a ‘70s sound. I love the Southern California sound of the ‘70s going into the ‘80s. The ‘60s through the early ‘80s sound is something I really enjoy listening to.

Being a Linda Ronstadt fan, you’re involved in a current project, the Linda Ronstadt Experience.
Yes! Linda Ronstadt is one of my favorite singers on the planet. There was an organization putting together a tribute show about her music and I was hired on to be her in the show. It’s blossomed into a pretty solid project. We’ve been rehearsing and filming our promo video. We’ve actually done a couple of shows and have a couple in April, so we’re planning on booking more. Bronson, my guitarist from my band, is in this project with me, along with a bass player, drummer, and pianist who were also hired.

Tell me about your regular band. I know your guitarist, Bronson. I met him at Summer NAMM when you both performed at our booth.
Well, like you mentioned, Bronson is my guitar player. I’ve known Bronson since I was 12, and he’s been my guitar player ever since I started the band. We actually met through our vocal teacher. She was judging a competition that he won, and she introduced us. We’ve kept in contact and have been friends since then. TJ is my drummer – he’s actually from Connecticut and I met him through Craigslist, crazily. TJ has been with the band for almost two years now. Our bass player, we kind of have trouble with bass players, but right now we have Blaine Faulkner who’s been really great.

When working on overall image and stage presence, what does that include?
I’m always practicing my instruments just trying to get better. It’s not about practicing the same thing over and over again. You have to kind of branch out and play something that you’re not comfortable with so that you can get better. Vocally, I’m always singing. I actually never stop singing, apparently because I will be singing, and I won’t even notice it. People will tell me to stop singing. Performance-wise, I’d be very timid and shy onstage, but I had one performance coach that really opened my eyes to the whole thing, and now I work on it every time I get on the stage.

Being on American Idol didn’t get you over being timid and shy?
It definitely helped!

What inspires you to music?
When it happens, it’s usually random ideas. I’ll write them down, and me and whoever I’m writing with kind of come together collaboratively on whatever we’re feeling in that session.

You played at the Grand Ole Opry and the Ryman Auditorium. How was that experience?
Really it was dream-like. It was so insane how all of it happened. It was like the two best nights of my life.

Your bio says, “My music will always reflect who I am.” Who is Tristan McIntosh?
I think I’m honest. I guess that would be the most defining characteristic of myself and my music and personality. I won’t lie. I don’t hide anything.